IU School of Medicine has been the world’s leading institution in pioneering the surgical technique of retroperitoneal lymph node dissection (RPLND) since the 1960s when John Donohue, MD began performing this operation in attempts to cure patients with metastatic testicular cancer. This interest led to the development of a number of modifications to the technique over the decades, which have helped standardize the procedure and lower patient morbidity. One of these accomplishments was the development of this nerve-sparing procedure, which preserves ejaculatory function and, as a result, fertility in young men who require this operation.

The groundbreaking work of Donohue and Lawrence Einhorn, MD on cisplatin-based treatment of metastatic testicular germ cell tumor (GCT) in the 1970s, as well as follow-on descriptions of postchemotherapy histology at consolidative retroperitoneal lymph node dissection (RPLND) and the modified templates in primary RPLND in the early 1980s, resulted in IU becoming a world referral center for the management of  germ cell tumors. Since that time, IU School of Medicine Department of Urology and our partners at Indiana University Health have remained at the forefront of testicular cancer treatment and research. Through intense daily collaboration with colleagues in medical oncology, genitourinary pathology, thoracic surgery, surgical oncology and radiation oncology, the department strives to continually improve upon care for GCT tumor patients.

Department of Urology faculty physicians have performed more than 6,000 retroperitoneal lymph node dissection procedures since the late 1960s. The heat map below shows the nationwide patient population IU School of Medicine faculty have treated since the 1960s. Areas in red have been the source of referral of 50 or more patients. 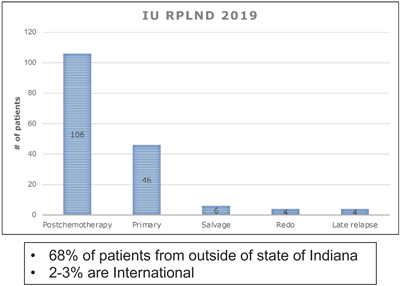 In terms of contemporary data, the department maintains a robust surgical experience as demonstrated in the table to the right, with over 160 RPLNDs performed at IU Health in 2019, the majority of which are complex posthchemotherapy resections (64%) and from outside the state of Indiana (68%).

Patients with clinical stage I or low volume stage II disease have the option of electing to undergo this procedure as both a diagnostic and therapeutic treatment option. If cancer is found in the retroperitoneal lymph nodes, a properly performed retroperitoneal lymph node dissection can be curative with surgery alone in up to 80 percent of cases. This eliminates the need or risk of chemotherapy and its subsequent acute and long-term side effects.

Patients who present with bulkier metastatic disease and/or elevated AFP or HCG receive chemotherapy and then undergo follow-up imaging in the form of a CT scan. If residual disease in the retroperitoneum is greater than one centimeter in size, a postchemotherapy, retroperitoneal lymph node dissection is recommended. The rationale for this is to remove either teratoma or residual active germ cell tumor elements.

The spread of testicular cancer to the retroperitoneal lymph nodes follows a predictable pattern. A properly performed retroperitoneal lymph node dissection requires removing the lymphatic tissue/nodes from around the vena cava and/or aorta. This occurs from the renal blood vessels superiorly to where the ureters cross over the iliac blood vessels inferiorly. This also includes removing the lymphatic tissue from behind the vena cava and/or aorta. 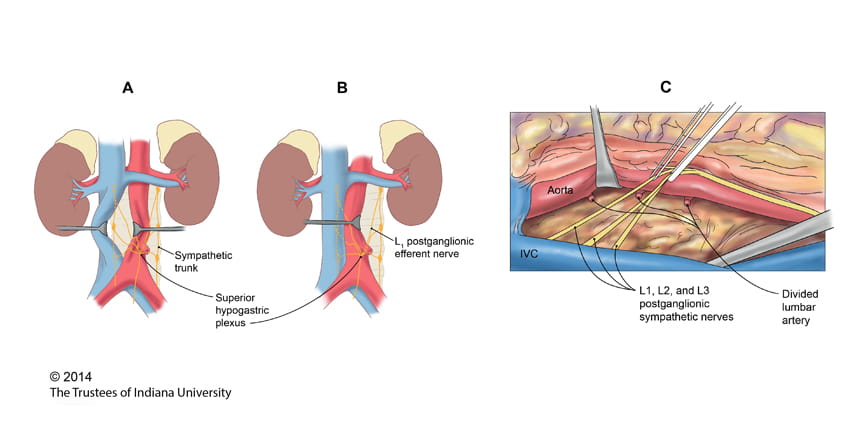 The nerves that control ejaculation and, as a result, fertility course through the retroperitoneum where the lymph nodes are located that need to be removed. Depending on each individual case, these nerves can be preserved and separated from the lymphatic tissue. Performing a nerve-sparing procedure maintains ejaculation following surgery and the potential fertility remains intact. If it is not technically possible to save or spare these nerves, then retrograde ejaculation occurs at the time of an orgasm. This is where the semen and sperm go into the bladder instead of out through the penis and can also be referred to as a ‘dry ejaculate.’ This is not harmful, but obviously limits the ability to maintain normal fertility.

If you are interested in making an appointment with one of our faculty physicians, visit the IU Health website.