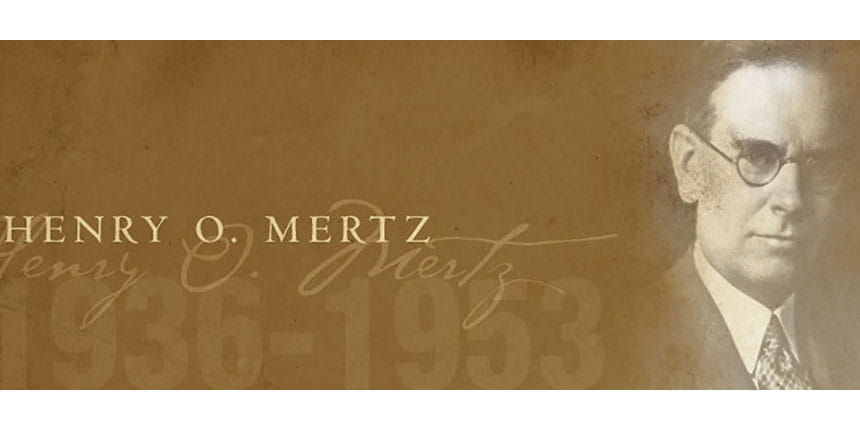 “Courtesy, compassion and capability—he had all three in great measure. He was compassionate with his patients and truly sympathized with them in their illness. They adored him.” – W.N. Wishard, Jr.

“Dr. Mertz repeatedly taught by citing his own errors, a mark of humility not lost on residents and colleagues. He was respected for his firm fairness and adherence to high ethical standards.” – R.A. Garrett

Dr. Henry Oliver Mertz was advanced to the Chair of the Department of Urology by Dean Willis D. Gatch in 1936 succeeding Dr. Wishard Sr. He was born in Roundhead, Ohio in 1884, and received his medical degree at Indiana Medical College in 1908. He practiced general medicine in LaPorte, Indiana, where he developed an interest in genitourinary diseases. He attended the teaching clinics of the leading urologists in Chicago and made observations of his own in early publications dealing largely with uropediatric disorders.

Such signal enterprise in urology attracted the attention of Dr. Wishard Sr. who persuaded Mertz to join Dr. Hamer and himself in their practice in Indianapolis in 1918. He was soon thereafter appointed to the urologic staff at Indiana University into which had been merged Indiana Medical College. This alliance of three productive clinicians formed a nucleus, together with Drs. Garshwiler and Weyerbacher, for urologic education in the 20’s and 30’s.

Dr. Mertz tenure as chairman was characterized by a harmonious collegiality among his staff and statewide urologists. He barely touched our own era, but in many ways affected our careers. He spanned the shift from the largely descriptive and cognitive, to research oriented interventional urology with an enthusiasm that was infectious. He repeatedly taught by citing his own errors, a mark of humility not lost on residents and colleagues. He was respected for his firm fairness and adherence to high ethical standards.

His notable contributions were in uro-pediatrics which had attracted him in his early practice. With the opening of the James Whitcomb Riley Hospital for Children in 1924 a pediatric population was provided for his enthusiastic study. He was among the founding group that later became the Society for Pediatric Urology. He maintained an exhaustive database in longhand of all the children that were seen at the Riley Hospital for genitourinary disorders from which a number of descriptive manuscripts were drawn. Early in his tenure as chairman he sought establishment of a residency program at the University Medical center (IUMC). In this he was frustrated by the manpower restrictions imposed by the ensuing World War II.

Residency training in urology throughout the United States had impetus following World War I, but the real multiplication of training centers followed the formation of the American Board of Urology in 1935. Prior to that date many practicing urologists had preceptorial experience only. No general surgical training was necessary although many general surgeons included urologic problems among their regular practice. The growing influence of the Board discouraged both preceptorial training and the practice of urology by general surgeons.

At the outset the residency called for one appointment each year. The residency period was two years. No preliminary surgical training was required. Patient responsibilities extended to the Long, Riley and Coleman Hospitals. The first resident, Robert A. Garrett, started in 1946.

Dr. William N. Wishard Jr. was a perennial supporter of the department his father founded joining the practice in 1928. Shortly after the residency was established Bill suffered a disabling auto accident which somewhat limited his attendance at surgery, however he regularly attended our clinics, guided us wisely and extended his enormous influence and prestige to our training program. He was a long-standing member of the Admissions Committee of the medical school where I had an opportunity to observe and appreciate his devotion to the tasks of this important body. He served the North Central Section as President in 1951, was a member, secretary and then President of the American Board of Urology and was President of the American Association of Genitourinary Surgeons in 1965-1966. The Guiteras Medal, the highest honor bestowed by the American Urological Association, was presented to him in 1973. Bill was a faithful churchman and served his congregation as elder for many years. 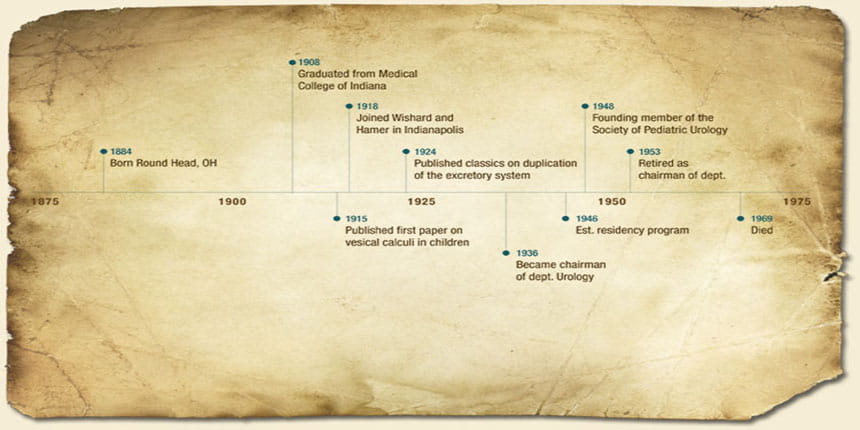