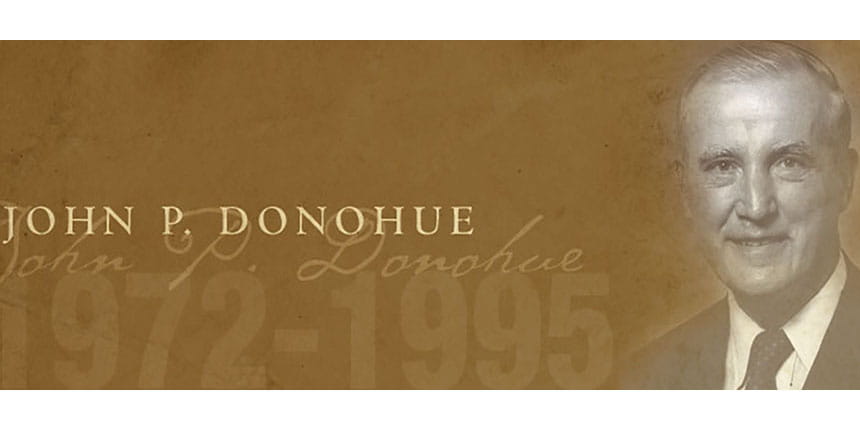 “Dr. Donohue provided wonderful instruction and instilled a ‘fearlessness’ of being in the abdomen.” – J. Thomalla, MD, resident ’81 – ‘85

“John was noted for his quick wit, charm, intellect, and infectious and often mischievous smile. There was always that undercurrent that he knew something that you had not quite discovered yet yourself and, indeed, that was usually the situation. John was a consummate surgeon, chairman of urology, educator, and scientist, and was equally adept in all of these areas.” – L. Einhorn, MD, Lance Armstrong Distinguished Professor of Medicine

Donohue’s ascension to chairmanship was preceded by his appointment to professorship. The transition was a very smooth one. Often the presence of a former chief (myself) leads to intolerable friction. This did not happen under Donohue. His early touch led to a smooth transition.

During the period 1972-1978 Donohue led the transition from solo geographic full-time practice in the University setting to corporate practice which greatly unified effort, availed us of greater recruiting attractiveness and made possible the expansion of our staff from three to nine surgeons. This in turn made it possible to closely supervise resident patient management in all our institutions and enter more extensively our laboratory investigations. The importance of this transition, in my opinion, cannot be overestimated.

Donohue, whose major commitment from 1965 to 1972 had been renal transplant, realized on assuming the chair in urology that the time demands of the transplant service did not allow a broad commitment to other areas of clinical urology. Together with the Department of Medicine Division of Nephrology he supported the formation of a separate renal transplant service with urologic participation in donor kidney harvesting. This has proven to be a satisfactory approach and has allowed development of other clinical areas.

Early on the problem of testis neoplasm intrigued Donohue, especially the surgical aspects of retroperitoneal lymph node dissection (RPLND). Somewhat later Dr. Lawrence Einhorn was pioneering the chemotherapeutic use of cis-platinum in metastatic testis neoplasia. The Einhorn-Donohue team soon were to become international leaders in this area of oncology, being chiefly responsible for the dramatic improvement in survivorship with testis tumor. In evaluation of the best approach to retroperitoneal node dissection, evidence for tumor crossover led to Donohue’s development of bilateral RPLND by the expedient of ligation of the inferior mesenteric vein enabling mobilization of the pancreas and exposure of the entire retroperitoneal compartment up to the crus of the diaphragm. In the world’s largest experience with this problem here at Indiana University the role for RPLND has been established. This interest in RPLND has led to the development of a number of modifications, which have helped standardize the procedure and lower morbidity. Of particular significance was the development of the nerve-sparing RPLND, which preserves the ejaculatory mechanism.

The year 1978 was one of significant progress within the department. Three superb newcomers joined us. Dr. John Mulcahy via the Mayo Clinic and the University of Kentucky where he was a faculty member, assumed the position of chief of urology at the Wishard Memorial Hospital, formerly the Marion County General Hospital. John has developed a first rate clinical service at the General while pursuing his interest in surgery of impotency and the use of prostheses. Dr. Randall G. Rowland received his M.D. and PhD. at Northwestern Medical School as well as his urologic training. His interest is in oncology especially bladder carcinoma. He together with Dr. Mitchell developed the “Indiana Pouch”, a urinary bladder replacement following cystectomy for carcinoma, which has gained considerable following in the specialty. Randall has also strengthened the department with his expertise in the business management. He helped to establish a computerized patient database.

Dr. Mike Mitchell also came to us in 1978. He was a graduate of Harvard Medical School, had his residency at the Massachusetts General Hospital and a fellowship in pediatric urology under Dr. Hardy Hendren at Boston Children’s Hospital. Mike was assigned with me to the uro-pediatric division at the Riley Hospital, where he became chief in 1980. Mike proved to be a remarkably innovative and skillful reconstructive surgeon. His leadership led to some elegant laboratory research in the genesis of exstrophy of the bladder, together with Dr. Richard Rink. Rink, after completing residency with us in 1984, went to the Boston Children’s Hospital for a year of fellowship after which he returned to the Riley where he is now Chief of the Pediatric Urology Division. Mitchell, in 1989, departed to assume the position of Chief of Pediatric Urology at the University of Washington at Seattle. During Mitchell’s stay with us the Riley urology service more than doubled. He rapidly became a nationally acknowledged authority in reconstructive surgery of the genito-urinary organs. His work involving bladder augmentation with gastric segments was original and of distinct value in various neurogenic disorders. This work, too, was in partnership with Dr. Rink, for which both received honors.

Dr. James Lingeman, who had obtained his MD degree at Indiana, returned to our department in 1980, after residency in Grand Rapids, Michigan. Lingeman assumed the position of Chief of the Urology Service at the VA Hospital, which had been vacant since Dr. Melman’s departure in 1978. His interests soon centered on urolithiasis, and percutaneous nephrolithotomy. When a lithotriptor became available at the Methodist Hospital, Jim left us at the University in 1984 to join Dr. Newman at the Methodist and the firm of “Wishard, Hamer and Mertz” where the first such electrohydraulic lithotripsy in the united states was performed. Together with Newman, Lingeman has become one of the acknowledged authorities on the use of this modality in stone management.

Awards listed by the IU Alliance of Distinguished and Titled Professors

Honors since retirement include the Charles Huggins Medal given at NIH in 2001, a Donohue Chair of Urology established in 2003, the first Distinguished Career Award given by the Society Internationale d’Urologie in 2004, and the Ramon Guiteras Award, the highest honor bestowed by the American Urological Association given with a cash award, in 2005. In 2006, he received the Sanctae Crucis Award from Holy Cross College, the highest honor given to laymen alumni for contribution to society, and in 2008, he received the Keyes medal, the major award for lifetime achievement in Urology, given by the American Association of Genito-Urinary Surgeons.

Dr. Jeffrey A. Jones completed his training in 1991 and served at the National Aeronautics and Space Administration (NASA). His duties included overseeing the health of nearly 100 astronauts who flew in the space shuttle program or worked on the international space station (see figure below). More recently Dr. Jones served as a flight surgeon to an F-18 squadron in Iraq. 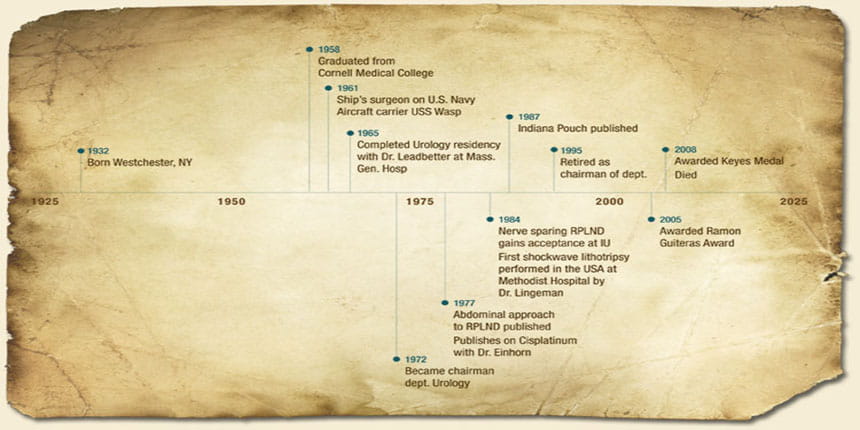