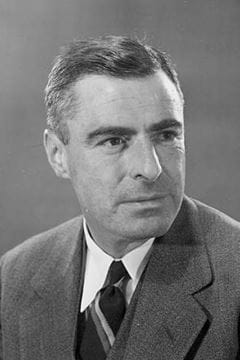 Dr. Lyman T. Meiks became the first full-time pediatric faculty member in 1931. Two decades later, in 1951 with five residents in the department, Dr. Meiks was named the first full-time Chair of the Department of Pediatrics. On occasion, Dr. Meiks was known to say when residents complained about their pay – “by gosh they have nothing to complain about, I had to pay for my residency.” He served as chair of the department until October 30, 1967.

During Dr. Meiks’ tenure, the number of full-time faculty grew to seven and pediatric residents to 12. Additional faculty included Dr. Morris Green who would become chair in 1967.

Dr. Malcolm Holiday, a well-known expert in fluids and electrolytes, joined the staff in 1951. Dr. William Segar, a former resident, also joined the faculty and later became the chair of the Department of Pediatrics at the University of Wisconsin. Dr. Jack Spevak was hired to be the first director of the new section on pediatric hematology/oncology.

Upon his retirement in 1971, Dr. Meiks received many letters of tribute from past students and colleagues, including one from Dr. Morris Green.

Lyman Thompson Meiks was born in Shelbyville, Indiana, in 1902. After graduating high school, he earned his AB degree from DePauw University. In 1927, he received his MD from the Johns Hopkins University School of Medicine. He served his internship at the Johns Hopkins Hospital, and completed a residency in pediatrics at the Yale University Hospital. Dr. Meiks was widely known as an authority on infantile paralysis (polio) and served as chair of the Indiana State Medical Association’s Committee on Infantile Paralysis.

I am writing with a somewhat different perspective than your other correspondents since I have the great distinction and honor of serving as your successor. Both you and the Riley Hospital have names which are both revered and trusted throughout this nation. I only hope, that at the end of my tenure, I shall have done half as well.

The Riley and the Meiks traditions are inseparably intertwined. They include, on a professional level, excellence in teaching with the old-fashioned idea that medical schools exist for teaching; service to physicians in the state; and support for research. On a personal level, they include personal integrity, sound judgement, unerring fairness and action based on what is right rather than what is merely popular at the moment or expedient.

With these clear precedents to follow, my job has been very simple. All I have to do is to think what Lyman Meiks would do – and do that! That’s my executive decision-maker, and it works beautifully.

For that, and for many, many other reasons and kindnesses, I am deeply appreciative. I shall forever treasure the opportunity to know you as a model teacher, inspiring leader, great clinician, and more important than all, a superb human being.