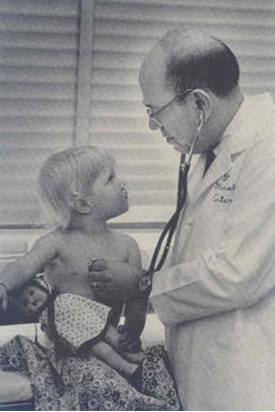 Morris Green (May 27, 1922 - August 6, 2013) was an American pediatrician, educator, and author. From 1967-1987, Green was the second full-time chair of Indiana University School of Medicine Department of Pediatrics and first Physician-in-Chief of Riley Hospital for Children. Under his leadership, department growth accelerated, outstanding faculty were recruited and an exceptional pediatric residency program was developed. Green's multidisciplinary approach, an example for care of Indiana's children, became a national model for children's care. He authored countless articles on a myriad of pediatric topics and authored the leading textbooks Pediatric Diagnosis and Ambulatory Pediatrics.

Morris Green was born on May 27, 1922 in Indianapolis, IN, and passed away on  August 6, 2013 in Gaithersburg, MD. His parents were Coleman and Rebecca (Oleinick) Green, immigrants from Lithuania who, once here, were married and began their own business, Green's Market, a neighborhood grocery store on Park Avenue in Indianapolis. His parents encouraged their six children to make the most of every opportunity and to further their education. In a stable neighborhood community surrounded by childhood friends, aunts, uncles, and cousins, Green attended elementary school and Shortridge High School in Indianapolis. Green later attributed the experience of his family's loss of his oldest brother at around six years of age as having considerable influence on him and indirectly on his interests in learning about child death, loss, grief, and related issues.

Finishing pre-med at Indiana University with his AB degree in 1942, Green was accepted into the Indiana University School of Medicine. World War II interrupted his training and his class' program was accelerated so that they graduated in December of 1944. He served as Captain in the United States Army from 1945-1947 and was assigned to Japan during part of this time.

After the war, he completed a residency in pediatrics from 1947-1949 at the University of Illinois School of Medicine Research and Education Hospitals where he formed life-long friendships with his teachers and fellow residents.

Following his residency, he stayed on at Illinois as an instructor in pediatrics from 1949-1952. He joined the pediatric faculty at Yale University as an assistant professor from 1952-1957. As at Illinois, during his five years at Yale, he won many teaching awards from students and residents, many who stayed in contact with Green for all of their careers.

In 1957, Lyman T. Meiks, first full-time chair of the Indiana University School of Medicine Department of Pediatrics, recruited Green back to Indianapolis to begin a program for ambulatory care and develop a modern-day facility for children.

In July 1958, the Kiwanis Diagnostic and Outpatient Center officially opened where Green introduced new methods to provide comprehensive patient care. Dr. Green believed that children with complex medical problems could receive an integrated evaluation in an ambulatory setting, with limited wait times and appointments all on one day and not having to make repeat and costly trips to meet with different doctors or for lab work or procedures.

He worked with the other departments and specialists on campus to organize clinic schedules so that all new patients came through the Pediatric Diagnostic Clinic on days designated for specific problems such as cardiology on Mondays and behavioral problems on Friday. By example, he also showed medical staff how patient interview and social history was just as important as the physical exam. Green's multidisciplinary approach led to shorter hospitalizations and fewer return clinic visits and became not only an example for care of Indiana's children, but a national model for children's care.

One of the biggest changes Green made at Riley Hospital for Children was with visiting hours for in-patients. Instead of 2 hours in the morning and 2 hours in the evening, Green initiated round-the-clock visitation, when appropriate. Hospital staff soon recognized the importance of families being there at any time at a child's bedside and also having a voice in the care of their child. He practiced family-centered care and spoke to various pediatric groups around Indiana, discussing the value of families, including siblings, to the overall quality of care of a hospitalized child, and particularly stressed the role of the father in a child's care, visionary changes in patient care for the late 1950s and early 1960s.

Years as Chair of the Department of Pediatrics

In 1967, Green was appointed chair of the Department of Pediatrics and the first Physician-in-Chief of Riley Hospital - only the 2nd full-time chair in the history of Riley Hospital for Children. In his role as Physician-in-Chief, he guided and facilitated the significant growth of Riley Hospital, services of the Department of Pediatrics and faculty during the next 20 years. During his tenure, Green guided the vision for Riley Hospital expansion with the opening of Phase II and Phase III of the hospital. Phase II was a 182,000 square feet five-story 3-wing addition to the hospital that included a concept originated by Green; the Baxter Parent-Care Pavilion that featured 24 rooms where parents lived with and shared in the care of their children who were not critically ill. The Phase II additional included a comprehensive Newborn Intensive Care Unit, enlarged ambulatory care facilities, new departments of occupational therapy and physical therapy, a child development section with staff offices, testing and observation rooms and classrooms, and a burn care unit, the first in Indiana, supported by a major contribution from Tri Kappa. Phase III, the 250,000 square foot Riley Hospital inpatient building, was dedicated on October 7, 1986 and included a model Infant Intensive Care Unit (the Nurture Center), expanded inpatient and intensive care units, 14 operating rooms, state-of-the-art imaging facilities and, for the first time, a cafeteria.

Green was nationally known and recognized as a leader and author. In 1970, Green was named Chair of the Health Section on the White House Conference on Children, Washington DC. He authored countless articles on a myriad of pediatric topics and authored the leading education programs offering up-to-date information to local pediatricians and family practitioners.

In 1987, he stepped down from the chair and physician-in-chief role to continue writing and seeing patients with psychosocial and developmental difficulties. Green was Commissioner of Health for the State of Indiana from 1990-1991. His retirement became effective in 1992 with the title of Perry W. Lesh Professor Emeritus of Pediatrics.

Because of failing health, Green retired completely in 2003 and he and his wife Janice moved to Maryland. On August 6, 2013 he passed away with family at his bedside. A life well lived, Green left a legacy of caring and remembering to look outside the box when diagnosing and caring for children through his training of medical students and residents and through his writings that have guided generations of pediatricians. Green's encouraging words are on a sign that greets all who enter into our Outpatient Center at Riley Hospital for Children in Indianapolis today:

Let all who walk this way know that Indiana cherishes her families, that she loves her children. In this very special haven, no child shall cry unheard...none shall walk alone...and no mother or father shall be friendless.

Throughout his time as chair, Dr. Green was supported by his long-time assistant, Mary Ann Underwood. Mary Ann Underwood joined Indiana University School of Medicine’s Department of Pediatrics at Riley Hospital in 1957 and after her retirement in 2006, she continued to work for the hospital on a part-time basis, a record of service totaling to over 60 years. Mary Ann worked alongside Dr. Green as secretary, administrative assistant, and coordinator of the residency programs and post graduate medical education planning. She collaborated with Indiana University on dedication and special events on the Indianapolis campus and coordinated Riley Hospital’s hallmark Child Care Conference for pediatricians for 44 years. Mary Ann introduced hundreds of donors, luminaries, international visitors, and physicians to Riley Hospital and traveled Indiana speaking to groups on behalf of Riley. Appointed Physician and Community Relations Coordinator by Dr. Richard Schreiner, who succeeded Dr. Green, he later named Mary Ann as Physician Liaison Visitor to pediatricians throughout Indiana. Generations of Indiana pediatricians know “Mary Ann” from Riley Hospital. In 1987, Mary Ann made history as a woman to be part of the first chartered Kiwanis Club in Indiana with women members. She later became the first woman to chair a committee for the Indiana Kiwanis District. Regarded as the Hospital’s ex-officio historian, Mary Ann has led efforts to protect and preserve many hospital photographs, stories, and artifacts.

Among Green's numerous awards were the following:

Green also was appointed to the Institute of Medicine, national Academy of Sciences as one of the first pediatricians to serve. During his tenure, he was Chair of the Committee for Study on Health Consequences of Bereavement; member, Panel on Mental Health of Children; member, Membership Committee; member, Steering Committee, Study on Research on Child and Adolescent Mental Health Disorders. He also was a member of the Board of Directors for the National Center for Clinical Infant Programs. On the American Board of Pediatrics he had been Chair for the Task Force on Growth and Development Program for Recertification. Green served on numerous committees through his years at Indiana University. these committees included the Executive Committee for the School of Medicine, Ambulatory Care Strategic Planning Committees for the Indiana University Hospitals, Chair of the Riley Master Program Planning Committee, Chair for search committees for the Dean of the Indiana University School of Medicine, and for the departments of obstetrics and gynecology, medical genetics and psychiatry. 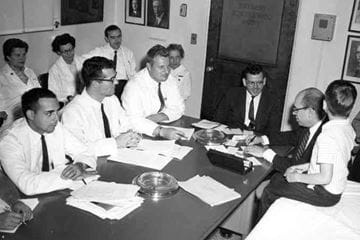 He was a member of numerous organizations and in those organizations served on many committees, often in the role of chair. Green was one of the founding members of the Ambulatory Pediatric Association.

Among Green's early writings was one that appeared with the phrase "vulnerable child," a concept that is still used today.

He wrote over 156 articles. In 1960, the Pediatric Clinics of North America published the Symposium on Adolescence that he developed along with Lyman T. Meiks. This particular symposium led to the establishment of the Annual Multidisciplinary Child Care Conference in 1961, a conference that still continues today. This particular 2-day meeting attracts registrants from Indiana and beyond and provides up-to-date information for practicing pediatricians, nurses and allied health professionals.

During his tenure at Yale University, Green met his wife, Janice Gorton Green, at the Yale-New Haven Hospital where she was a pediatric head nurse. They were married in New Haven, Connecticut. He later described meeting his wife as "one of the great things to happen in my life," and regarded her as having "a tremendous influence on my life." Green and his wife had six children: David, Alan, Carolyn, Susan, Marcia, and Sylvia.