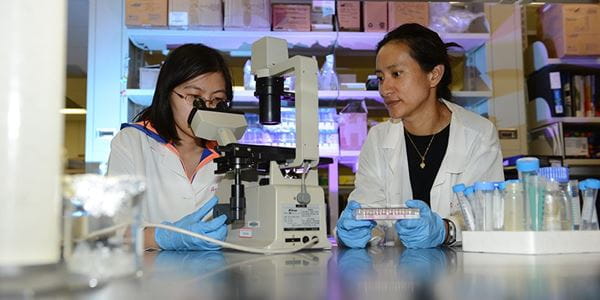 INDIANAPOLIS—Indiana University School of Medicine is celebrating a record-breaking year of funding awarded from the National Institutes of Health (NIH) for the sixth year in a row.

The school’s scientists and physicians were awarded more than $217 million in NIH research funding in the 2021 federal fiscal year, which is about $5 million more than the previous year. It was the second year in a row the school surpassed $200 million.

The NIH is the lead federal agency responsible for biomedical and public health research, and NIH grants are the most prestigious funding for researchers. IU School of Medicine is a national leader in the areas of pediatrics and medical and molecular genetics, both ranking eighth out of all pediatrics and genetics departments in the country. The school also ranked fourth in funding from the National Institute on Aging (NIA), the NIH branch that is the primary funder of Alzheimer’s disease research, and third in the National Institute on Alcohol Abuse and Alcoholism (NIAAA).

“Once again our faculty have showed tremendous leadership on a national level,” said Jay L. Hess, MD, PhD, MHSA, dean of IU School of Medicine and IU’s executive vice president for university clinical affairs. “The NIH is the gold standard of medical research. This increase in NIH funding year after year highlights the expertise and the importance of the work happening at IU School of Medicine. What’s most important is that this funding will accelerate progress toward eliminating some of our biggest health challenges.”

According to a report by United for Medical Research, every $1 million in NIH funding awarded to Indiana researchers created 13 jobs and $2.7 million in economic activity in 2020. Based on that data, IU School of Medicine’s 2021 NIH funding is responsible for more than 3,823 jobs—with 2,817 of those here in Indiana. The income from those jobs, along with other associated expenses, generates an estimated $594 million annually in economic activity in Indiana.

“Despite the challenges of the COVID pandemic, I am proud that IU School of Medicine has received increased NIH grant funding to support so many important areas of medical research,” said Tatiana Foroud, PhD, Executive Associate Dean for Research Affairs and Chair of the Department of Medical and Molecular Genetics. “Our faculty remain focused on research innovation and discovery to allow us to address the most important health challenges in the state of Indiana and beyond.”

For the third year in a row, four of the five research studies that received the most NIH funding at the school were for Alzheimer’s disease research, in alignment with the school’s top priorities. The top-funded study with $16.6 million in NIH support in 2021 was the Longitudinal Early-Onset Alzheimer’s Disease Study (LEADS) led by Liana Apostolova, MD. The focus of the LEADS study is a form of Alzheimer’s disease that afflicts patients between the ages of 40 and 65.

At No. 2 was the IU School of Medicine Alzheimer’s Disease Drug Discovery Center led by Alan Palkowitz, PhD. The center aims to address challenges in discovering new therapeutic targets and drugs for the disease and accelerate the development of promising new treatments.

Other top Alzheimer’s grants include the National Centralized Repository for Alzheimer’s Disease and Related Dementia (NCRAD), which is led by Foroud and collects and distributes biological samples like DNA, plasma and tissue from patients with dementia for use in local and national research, and the Model Organism Development and Evaluation for Late-Onset Alzheimer’s Disease (MODEL-AD), which is led by Bruce Lamb, PhD and is a consortium working to translate research discoveries into new Alzheimer’s disease therapies.

The Department of Pediatrics ranked eighth in the nation with $34.8 million in funding, about 16 percent of the school’s total NIH funding. Grants awarded to the department were for 63 studies, including research on severe asthma management and congenital heart defects.

The Department of Medical and Molecular Genetics also ranked eighth with more than $23.8 million in funding, accounting for about 11 percent of the school’s total NIH funding. The department received funding for 19 studies, including several grants for work researching Alzheimer’s disease.

IU School of Medicine saw 8 total departments in the top 20 rankings in 2021. The department of Obstetrics and Gynecology jumped 18 spots to rank 20th among all other departments in that field nationally. The Department of Radiology and Imaging Sciences also joined the top 20 in that field, moving 6 spots to rank 17th. They join Biostatistics (12), Emergency Medicine (15), Medical and Molecular Genetics (8), Neurology (18), Otolaryngology (18) and Pediatrics (8).