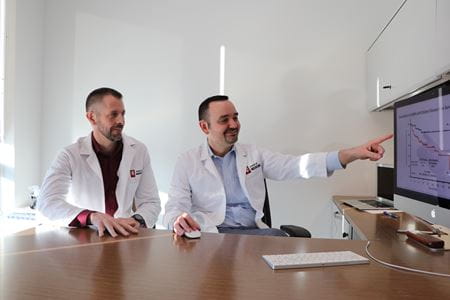 INDIANAPOLIS– Indiana University School of Medicine researchers Milan Radovich, PhD, and Bryan Schneider, MD, have discovered that the presence of circulating tumor DNA (ctDNA) and circulating tumor cells (CTCs) in the plasma of women’s blood who have undergone chemotherapy prior to surgery for the treatment of stage 1, 2 or 3 triple negative breast cancer are critical indicators for the prediction of disease recurrence and disease-free survival. Their findings, published today in the prestigious international peer-reviewed journal, JAMA Oncology allow for a stratification of patients in clinical trials around the world, that didn’t exist prior to their discovery.  The pair also spoke about their findings as part of a JAMA Oncology podcast.

“These findings from the Vera Bradley Foundation Center for Breast Cancer Research, located at IU School of Medicine, enable a scientific basis for predicting relapse and disease-free survival, which are both important questions for women who live in constant fear of their disease returning,” said Jay L. Hess, MD, PhD, MHSA and dean of IU School of Medicine. “The discoveries reflect our long history as  leaders in genomics, bioinformatics and medical innovation.”

Specifically, Radovich and Schneider, who are also researchers at the IU Melvin and Bren Simon Comprehensive Cancer Center, along with colleagues from the Hoosier Cancer Research Network, analyzed plasma samples taken from the blood of 196 women, as part of a preplanned secondary analysis of women who were participants in clinical study BRE12-158. This is the largest known data set of patients to date.

Approximately one-third of patients will achieve remission from their triple negative breast cancer, following surgery and chemotherapy. However, two-thirds will have residual disease, putting them at high risk of relapse. These findings will be the focus of the PERSEVERE study, which will stratify women with triple negative breast cancer based on being ctDNA positive and assign them a targeted therapy matched to the patient’s genomic sequencing. The study is powered to help discover a personalized therapy for patients at high risk for relapse and for whom no treatments currently exist. More information about the PERSEVERE study will be provided in the coming months.

“A diagnosis of triple negative breast cancer is very scary to the patient. The discovery and utilization of circulating tumor DNA and circulating tumor cells to better predict recurrence, by Drs. Schneider and Radovich, has provided a huge step forward toward more certainty for treatment decision making,” said Mary Lou Smith, co-founder of the Research Advocacy Network. “This significant scientific advancement will help personalize treatments for those still battling residual disease.”

“Since uncovering these findings in women diagnosed with triple negative breast cancer, we have learned that others are applying this stratification of patients based on ctDNA and CTCs to other cancers, including breast and colon,” said Radovich.

“This is an important step forward in the treatment of women with triple negative breast cancer, who have not had much scientific evidence to point to—until now—for treatment of their disease,” said Schneider. “We are going to use these findings and continue on until we find a treatment that works for each individual woman. This effort not only involves finding the best way to kill cancer, but to minimize side effects.”

As a further testament to the significance of these findings, Radovich presented the initial findings as part of an oral, plenary session on December 13, 2019, at the San Antonio Breast Cancer Symposium, the most influential gathering of breast cancer researchers and physicians in the world.

Study BRE12-158 was funded by the Vera Bradley Foundation for Breast Cancer and the Walther Cancer Foundation. It is part of the Indiana University Precision Health Initiative Grand Challenge. The study was managed by the Hoosier Cancer Research Network and enrolled at 22 clinical sites across the United States.