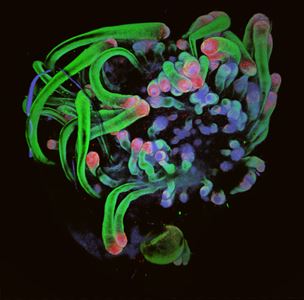 Building on years of groundbreaking discoveries in stem cell research, scientists from Indiana University School of Medicine and Harvard Medical School have determined how to grow hairy skin using human stem cells—developing one of the most complex skin models in the world.

The study, published June 3 in Nature, shows that skin generated from pluripotent stem cells can be successfully grafted on a nude mouse to grow human skin and hair follicles. That discovery could lead to future studies in skin reconstruction, disease modeling and treatment.

“This is the first study to show that human hair can be grown completely from stem cells in a dish, which has been a goal of the skin biology community for decades,” said Karl Koehler, PhD, assistant professor of otolaryngology—head and neck surgery at Harvard Medical School and Boston Children’s Hospital.

The team of researchers was led by Koehler, who’s also an adjunct assistant professor of otolaryngology—head and neck surgery at IU School of Medicine, and Jiyoon Lee, PhD, a research associate in Koehler’s lab. The group’s findings originate from several years of stem cell research within the Department of Otolaryngology—Head and Neck Surgery at IU School of Medicine. In 2013, scientists created inner ear tissue from mouse embryonic stem cells using a three-dimensional cell culture method. In 2017, they developed a method to grow inner ear tissue from human stem cells, and in 2018, the researchers grew hairy skin in a dish using mouse stem cells, a scientific first.

Through the three-dimensional culture technique developed in past experiments, the team incubated human stem cells for about 150 days in a ball-shaped cluster of cells, called a skin organoid. The interior of the aggregate of cells represent the top layer of skin (the epidermis) and the outside of the cluster develops the bottom layer of skin (the dermis).

“We’ve developed a new cooking recipe for generating human skin that produces hair follicles after about 70 days in culture,” Koehler said. “When the hair follicles grow, the roots extend outward radially. It’s a bizarre-looking structure, appearing almost like a deep-sea creature with tentacles coming out from it.”

After the incubation period, researchers tested whether skin organoids could integrate on the skin of nude mice. More than half of the organoids they grafted on the mice grew human hair follicles. The skin organoid developed from culture is akin to fetal facial skin and hair, Koehler said.

The experiments show that organoid generated hairy skin can integrate into mouse skin, Koehler said, which suggests potential applications in skin and facial reconstruction. Physicians typically perform skin grafts in surgery, meaning the removal of skin from one area of the body to transplant on skin that’s been wounded.

“This could be a huge innovation, providing a potentially unlimited source of soft tissue and hair follicles for reconstructive surgeries,” said Lee, the first author of the study.

Taha Shipchandler, MD, associate professor of clinical otolaryngology—head and neck surgery at IU School of Medicine and one of the paper’s authors, specializes in facial plastic and reconstructive surgery. Skin regeneration is of great interest for treating patients, he said.

“If we can harness this growth into a medium, and easily apply it to patients, it would change the way we treat many injuries or reconstructions,” Shipchandler said. “This would have a profound effect on the medical field.”

The other potential uses of hairy skin organoids vary widely, from developing drug or gene therapies for congenital skin disorders to recreating the earliest stages of skin cancer formation. In addition, more research is needed to analyze the development of sensory neurons and Merkel cells—specialized touch sensing cells of the skin—bundled within the organoid hair follicles, Koehler said, adding that the neurons potentially mimic the nerves mediating touch sensations.

“We’re setting up experiments where we wiggle the hairs and see if the neurons activate,” Koehler said, “as proof of concept that our skin can respond to touch in some way.”

This research was supported by the Ralph W. and Grace M. Showalter Trust, Indiana Clinical Translational Sciences Institute, the Indiana Center for Biomedical Innovation and the National Institutes of Health.