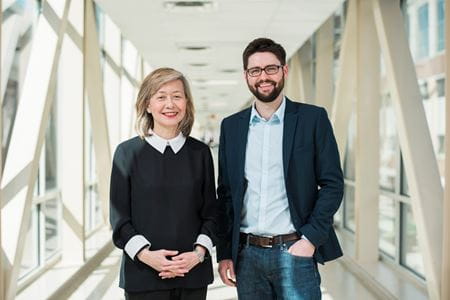 INDIANAPOLIS – Researchers at Indiana University School of Medicine have successfully developed a method to grow inner ear tissue from human stem cells—a finding that could lead to new platforms to model disease and new therapies for the treatment of hearing and balance disorders.

“The inner ear is only one of few organs with which biopsy is not performed and because of this, human inner ear tissues are scarce for research purposes,” said Eri Hashino, PhD, Ruth C. Holton Professor of Otolaryngology at IU School of Medicine. “Dish-grown human inner ear tissues offer unprecedented opportunities to develop and test new therapies for various inner ear disorders.”

The study, published online May 1, 2017, in Nature Biotechnology, was led by Karl R. Koehler, PhD, assistant professor in the Department of Otolaryngology and Head and Neck Surgery at IU School of Medicine, and Dr. Hashino in collaboration with Jeffrey Holt, PhD, professor of otology and laryngology at Harvard Medical School and Boston Children’s Hospital. The research builds on the team’s previous work with a technique called three-dimensional culture, which involves incubating stem cells in a floating ball-shaped aggregate, unlike traditional cell culture in which cells grow in a flat layer on the surface of a culture dish. This allows for more complex interactions between cells, and creates an environment that is closer to what occurs in the body during development, Dr. Koehler said.

By culturing human stem cells in this manner and treating them with specific signaling molecules, the investigators were able to guide cells through key processes involved in the development of the human inner ear. This resulted in what the scientists have termed inner ear “organoids,” or three-dimensional structures containing sensory cells and supporting cells found in the inner ear.

“This is essentially a recipe for how to make human inner ears from stem cells,” said Dr. Koehler, lead author of the study and whose research lab works on modeling human development. “After tweaking our recipe for about a year, we were shocked to discover that we could make multiple inner ear organoids in each pea-sized cell aggregate.”

The researchers used CRISPR gene editing technology to engineer stem cells that produced fluorescently labeled inner ear sensory cells. Targeting the labeled cells for analysis, they revealed that their organoids contained a population of sensory cells that have the same functional signature as cells that detect gravity and motion in the human inner ear.

“We also found neurons, like those that transmit signals from the ear to the brain, forming connections with sensory cells,” Dr. Koehler said. “This is an exciting feature of these organoids because both cell types are critcal for proper hearing and balance.”

Dr. Hashino said these findings are “a real game changer, because up until now, potential drugs or therapies have been tested on animal cells, which often behave differently from human cells.”

“We hope to discover new drugs capable of helping regenerate the sound-sending hair cells in the inner ear of those who have severe hearing problems,” Dr. Hashino said.

Additional researchers on the study include Jing Nie, Emma Longworth-Mills and Jiyoon Lee of IU School of Medicine, and Xiao-Ping Liu of Boston Children’s Hospital.

This research was funded by the National Institutes of Health and the Action on Hearing Loss.

Marion Couch to lead IU School of Medicine Department of Otolaryngology
IU researchers create the inner ear from stem cells, opening potential for new treatments
Listening and Hearing, Not the Same for Children with Cochlear Implants
Language Acquisition in Babies with Cochlear Implants, This Week on Sound Medicine
Can Motorsports Fans 'See' with Their Ears?