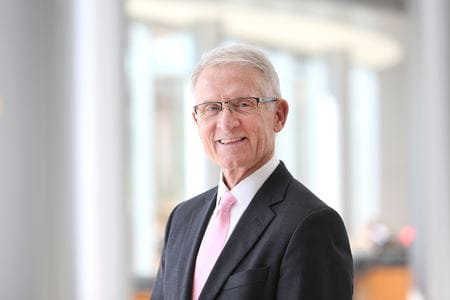 There’s a floor-to-ceiling window behind the desk in Steve Bogdewic’s office.

Through it he has a picturesque view of the IU School of Medicine campus. The tops of the buildings that fill the landscape are the halls and centers where medical students learn; they’re the Indianapolis hospitals and facilities where residents and fellows train, where research is conducted and lives are saved.

Bogdewic, PhD, speaks with colleagues during a leadership lesson.

Bogdewic’s impact at the school runs deep inside those structures. It’s found in every person—every chair, director and faculty member—who has had the opportunity to work with him and benefit from his leadership in the last 28 years.

Those nearly three decades of influence are now coming to a close, as Bogdewic, PhD, prepares to retire from his role at IU School of Medicine and return to Chapel Hill, North Carolina, where his career in academia began.

Throughout his time at IU, Bogdewic has worked hard to ensure professional development remains a priority within IU School of Medicine. He’s led dozens of initiatives focused on leadership.

Bogdewic, pictured during his time in the military.

He spearheaded the creation of the school’s strategic plan and served as the first executive associate dean for faculty affairs and professional development.

In fact, Bogdewic’s tenure with IU School of Medicine can be summarized by a long list of firsts.

Early in his career, he was the school’s first assistant dean for primary care education. He is also the first to hold his current position of executive vice dean, which puts him at the right hand of Dean Jay L. Hess, MD, PhD, MHSA.

Hess remembers meeting Bogdewic and being struck by his insightfulness and broad thinking. When looking for someone to take on the new role of executive vice dean, he knew Bogdewic was the right person for the job.

Perhaps it’s his military background that keeps Bogdewic so focused on the mission, Hess said. No matter the setbacks or challenges he may face, he maintains an unwavering focus on IU School of Medicine’s goal of improving health in Indiana.

“He has become one of my closest colleagues and best sources of institutional memory and advice,” Hess said. “We are unquestionably a stronger medical school because of Steve. Thanks to his service, we offer robust programs for faculty development and leadership training. We have clearly articulated goals and systems to measure our progress toward them. He will be deeply missed, however, his influence will continue to be felt for many years to come.”

Bogdewic’s colleagues say they’ll miss his unwavering support and friendship; his ability to focus any project that supports the school’s mission; and his distinct, infectious laughter.

Bogdewic was a pilot in the United States Navy during the Vietnam War, and initially considered making a career out of his military service.

Bogdewic flew planes for the U.S. Navy during the Vietnam War.

He’d grown up in rural Pennsylvania, where patriotism was just “something you did without question,” he said.

But during his time in uniform, he realized he enjoyed working with people more than he enjoyed flying airplanes. He decided to leave the Navy and further his education. Having earned a bachelor’s degree in clinical psychology from Wheeling Jesuit University in West Virginia about a decade earlier, Bogdewic pursued a master’s degree in marriage, family and child counseling from Santa Clara University in California.

While living and working in the San Francisco Bay Area, a colleague approached him with an opportunity to join the faculty in the Department of Family Medicine at University of North Carolina at Chapel Hill. He accepted the offer. He earned his PhD in adult education and organizational development from the university in 1987.

Bogdewic views people as the greatest asset within any organization. During his time in Chapel Hill, and after he joined the faculty at IU School of Medicine, he became an advocate for professional development—an area of academia that had been widely overlooked.

Early in his career Bogdewic developed a deep appreciation for just how hard those in academic medicine work.

Bogdewic, PhD, speaks with colleagues during a leadership lesson.

The world of multiple missions, multiple constituents and multiple funding sources requires every faculty member wear many hats, and perform exceptionally well in each domain.  In response to his understanding of the major demands placed upon faculty he helped create a faculty development fellowship in North Carolina, which is now in its 40th year.

In that program, what Bogdewic did—and still does to this day—is help colleagues develop their capacity to manage complexity, conflict and change, and strengthen the leadership skills necessary to advance the institution’s mission.

Coming to Indiana in the early ’90s was a gamble, he admitted, because it meant starting over in a new place. He began making an impact simply by asking questions that got others thinking. Quickly, he sparked change.

The same year he officially joined the IU faculty, Bogdewic chaired a task force that made the first major revision to the school’s medical curriculum in several decades.

Bogdewic oversees a session of the LAMP leadership program he created.

Over the next 10 years, Bogdewic taught and saw patients, becoming a widely respected leader in the field of family medicine while also furthering change at IU School of Medicine.

He developed a vertical mentoring program, in which small groups of students helped each other navigate medical school and better prepare for residency.

He established the Office of Faculty Affairs and Professional Development and became its first executive—a role that allowed him to develop further leadership and diversity programming, like the Women’s Advisory Council, the Office of Multicultural Affairs and a Teacher-Learner Advocacy Committee.

Bogdewic is too humble to call these feats accomplishments. Instead, he said he feels blessed to have had the chance to influence a place in a positive way.

‘What makes Steve who he is”

Bogdewic and his wife, Betsy.

Bogdewic’s colleagues, however, are happy to brag about his successes. Calling him a mentor, a trusted colleague and sounding board, they say he’s done much more for the School of Medicine that just leave a mark.

Bogdewic helped foster a culture at IU School of Medicine that prioritized the faculty, their wellbeing, their talents and their satisfaction, Dankoski said.

She said she believes that without that mindset, the school wouldn’t be as successful as it is today. Without Bogdewic, there might not be as much emphasis on inclusion and collaboration. His emphasis on supporting the faculty has led to culture change that will last in his absence.

Bogdewic was recognized during a June 19, 2019 reception with the university’s Distinguished Service Medal and the establishment of an annual lectureship in leadership that bears his name.

The Distinguished Service Medal recognizes “sustained distinction in administrative and other service to the University over an extended period of time or notable contributions that improve the university in major ways.” Recipients are selected by IU President Michael A. McRobbie.

During the reception, Hess also announced that friends and colleagues have come together to establish the Stephen P. Bogdewic Lectureship in Medical Leadership.

The annual lecture will bring outstanding leaders to the school to share their insights with chairs, directors, faculty and learners. The Bogdewic Lecture is intended to build on Bogdewic’s “legacy of leadership development by promoting and cultivating a leadership mindset.”

Bogdewic poses with colleagues at an event for the Office of Faculty Affairs, Professional Development, and Diversity at the IU School of Medicine.

Kevin Gebke, MD, the chair of the Department of Family Medicine, said Bogdewic’s clinical background as a therapist likely drives much of his approach to faculty development, and the understanding and thoughtfulness with which he leads.

“The skills he has honed in relationship evaluation and development have served him really well as he’s worked with people to develop their own career paths and leadership capacities,” Gebke said. “I think it’s part of the fabric of what makes Steve who he is.”