The sacred space of healing: Class of 2021 servant leader pursues calling as surgeon

At 18, Mohammad Aref remembers sitting in a waiting room at midnight with his mother. His father was in an overnight emergency surgery due to a significant complication related to an earlier accident, and there was a high likelihood he would not make it through the procedure. When the doctor pushed through the double doors to deliver the news, Aref recalls wanting to escape.

“I remember all those feelings very vividly and the possibility that the doctor would tell us my father did not make it,” Aref said. “The physician was in his scrubs, and for me, those scrubs carried an implicit promise that this doctor was going to care for my dad and for us the best he could at the moment. When I walk up to a patient now, that is the heart and the moment that I carry. I want to steward those moments very well.”

His father survived the operation, and Aref, influenced by his experiences, is now headed to The Johns Hopkins Hospital to pursue a residency in surgery. Aref earned an undergraduate degree in biomedical engineering at IUPUI in 2013 and recently earned his MD and PhD in anatomy, cell biology and physiology at Indiana University School of Medicine. During that time, he has grown into a compassionate, patient-centered community leader with deep spiritual grounding.

“Mohammad has a personal and global understanding of medicine and humanity,” one of his mentors Jim Lemons, MD, professor of clinical pediatrics, said. “He knows this profession is a true calling, and he will use it for good and make a big difference in our world. It is an honor to know him and walk with him through part of his journey.”

The other side of scrubs

Aref’s journey toward becoming a physician began after his father’s accident. When Aref was 6 years old, his father was struck by a truck driver in an 18-wheeler. He lost both of his legs and spent a significant amount of time in the hospital recovering from the incident while Aref was young.

“After experiencing that, I wanted to be on the other side of scrubs and white coats,” Aref remembered. “Being helped has a beauty in and of itself, but I wanted to help others like my dad’s physicians helped us.”

Inspired by the mechanical feat of his father’s prosthetics, Aref decided to study biomedical engineering at IUPUI. During his studies, he had the opportunity to teach and build three-dimensional prosthetic hands with elementary school children who had amputated limbs. The experience revealed to him his love of teaching others about the body and how to empower their own lives through better health.

In addition to his coursework, Aref pursued research in one of the many labs that dot IUPUI’s campus. After sifting through hundreds of faculty names, a daunting task for a new college student who had never emailed a professor, Aref found two faculty members under the title, “Bone,” and reached out to both of them. After interviewing through the Life-Health Sciences Internship Program, he matched into one of the labs and has now worked with Matthew Allen, PhD, professor of anatomy, cell biology and physiology, for 11 years. 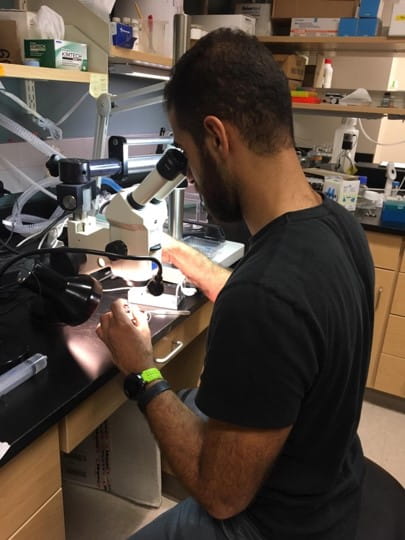 “Mohammad approaches things differently,” Allen said, who has been a primary mentor for Aref. “He has a quality you can’t put your finger on, and I could see that even when he was a sophomore in college. I would tell my colleagues that I was just trying to not get in his way as he grew.”

In Allen’s lab, Aref studied osteoporosis and later, during his doctoral studies, how blood flow is altered in the bones of individuals with chronic kidney disease (CKD). Individuals with CKD have higher risk of death from heart disease and bone fractures.

After graduating with his degree in biomedical engineering, Aref pursued medical training at IU School of Medicine and was soon encouraged by Allen and others to also work toward a PhD. The MD/PhD training is a rigorous option only pursued by eight to 10 graduates per class. Students take a few years to complete the research-focused core of PhD work, and return to the clinic after having developed an independent identity as a researcher. The program trains individuals who will go on to become physician scientists, doctors who have a unique skillset and can provide patient care and conduct biomedical research.

Aref noticed during his second year of medical training that he began to ask a lot of questions. After diving into the literature to find out why certain standards around chronic kidney disease were originally established, he connected with Sharon Moe, MD, associate dean for clinical and translational research, and one of Aref’s mentors, to find out more. Drawn to deepening his skills in research, Aref interviewed and entered the PhD program in 2015, ultimately earning his doctorate in 2019.

“I think the years spent pursuing a PhD gave Mohammad space to grow and develop his interests more deeply,” Allen said. As a mentor, he supported Aref in subtle, but critical ways by giving him space to develop his identity, time for conversation and an open lab in which to explore research questions. When planning for his dissertation, Aref remembered he and Allen sitting at a table to sketch out a plan and Allen saying, “Bone, vessel, kidney, go.”

“I look at my training in terms of seasons of focus,” Aref said. “I make my focus very clear so I can make the impact that I want to have. During my PhD work, I focused on how I ask a question, and how I answer a question. In my clinical training, I focused on gaining general medical knowledge and finding a field I wanted to pursue. In my first two years of residency, I will focus on becoming the best physician I can become.”

A heart for service

Those who have worked with Aref are quick to note his heart for service. During his training, Aref has not only been an author on 20 peer-reviewed journal articles and abstracts and received an individual NIH-funded fellowship grant, he has also played a significant role as a community leader in Indianapolis. 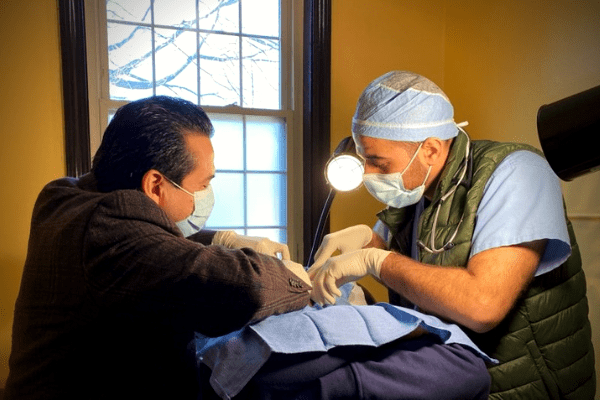 For eight years, Aref has epitomized servant leadership through his work at the IU Student Outreach Clinic (IUSOC). The IUSOC is a free, student-run clinic that provides primary care-based medical, dental, social and legal services for the uninsured and underserved in the Indianapolis community.

Aref served as clinic manager from 2016 to 2020 and was present at least 50 weeks of each year due to the relationships he built with patients and colleagues. While leading the clinic, Aref also served as research director in 2016 and 2020, and guided an interprofessional group of students to lead individual research projects. Through his work as chair of the IUSOC, Aref helped oversee dramatic clinic growth. IUSOC now accommodates more than 100 dedicated medical students who care for patients.

Aref’s service shares a common thread—to provide aid to the most vulnerable, individuals who are often forgotten or marginalized in the rush of society. He has helped homeless neighbors through résumé and job preparation at Horizon House and accompanied patients at their bedside during the final moments of life in a volunteer effort at Sidney & Lois Eskenazi Hospital called No One Dies Alone.

He has also worked to develop new programs that provide aid for immigrants and refugees. Aref is the founding member and clinic manager for a free clinic on the west side of Indianapolis where he and volunteers help individuals from the Nigerian diaspora overcome barriers to accessing healthcare. In addition, he is a founding board member of a free clinic in Near Westside, Indianapolis, which provides healthcare services and a wellness program for new immigrants.

Lemons shared his thoughts on what motivates Aref, “I think he truly loves his patients, and that is what is exceptional. That’s where the wellspring of joy in medicine comes from.”

Aref began taking night classes at IUPUI when he was just 13 years old and has been connected to IUPUI and IU School of Medicine for nearly 15 years.

“Part of me wants to write a letter, “Dear IU,’” Aref said, laughing. “Just to let them know they had a big impact on my life.” 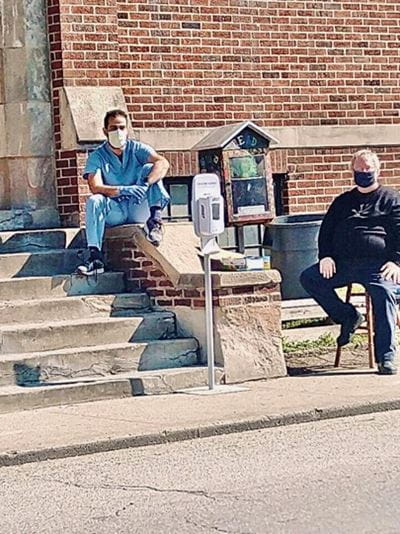 From the years spent developing research questions in Allen’s lab to the time invested in leading the IU Student Outreach Clinic, Aref’s experience is one defined by fostering relationships and growing initiatives that significantly improve the community and will ripple out into the future.

As he prepares for his next steps and move to Baltimore, MD, Aref’s goal is to focus on the upcoming season—becoming a competent, exceptional surgeon and scientist with a heart for the underserved. Reflecting on what inspires his calling to serve patients who are often in vulnerable situations like his family once was, Aref said, “When I enter into a patient’s room, I feel like I am in a holy place. My aspiration is to walk with them the best I can in whatever journey they are in.”