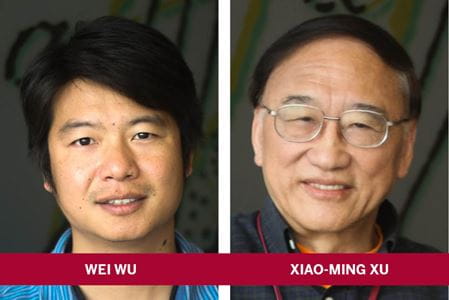 INDIANAPOLIS — Researchers at Indiana University School of Medicine have successfully reprogrammed a glial cell type in the central nervous system into new neurons to promote recovery after spinal cord injury—revealing an untapped potential to leverage the cell for regenerative medicine.

The group of investigators published their findings March 5 in Cell Stem Cell. This is the first time scientists have reported modifying a NG2 glia—a type of supporting cell in the central nervous system—into functional neurons after spinal cord injury, said Wei Wu, PhD, research associate in neurological surgery at IU School of Medicine and co-first author of the paper.

Wu and Xiao-Ming Xu, PhD, the Mari Hulman George Professor of Neuroscience Research at IU School of Medicine, worked on the study with a team of scientists from the University of Texas Southwestern Medical Center. Xu is also a primary member of Stark Neurosciences Research Institute, where he leads the Indiana Spinal Cord and Brain Injury Research Group.

Spinal cord injuries affect hundreds of thousands of people in the United States, with thousands more diagnosed each year. Neurons in the spinal cord don’t regenerate after injury, which typically causes a person to experience permanent physical and neurological ailments.

“Unfortunately, effective treatments for significant recovery remain to be developed,” Xu said. “We hope that this new discovery will be translated to a clinically relevant repair strategy that benefits those who suffer from a spinal cord injury.”

When the spinal cord is injured, glial cells, of which there are three types—astrocyte, ependymal and NG2—respond to form glial scar tissue.

The researchers reprogrammed the NG2 cells from the mouse model using elevated levels of SOX2—a transcription factor found inside the cell that’s essential for neurogenesis—to neurons. This conversion has two purposes, Xu said: generate neurons to replace those lost due to a spinal cord injury and reduce the size of the glial scars in the lesion area of the damaged tissue.

This discovery, Wu said, serves as an important target in the future for potential therapeutic treatments of spinal cord injury.

The partnership between the laboratory of Chun-Li Zhang, PhD, professor at UT Southwestern Medical Center, and Xu’s laboratory at IU School of Medicine greatly benefited the research, Xu added, by offering complementary expertise in neuronal reprogramming and in spinal cord injury, respectively.

“Such a collaboration will be continued between the two laboratories to address neuronal remodeling and functional recovery after successful conversion of glial cells into functional neurons in future,” Xu said.