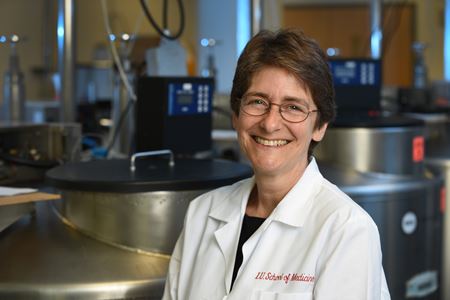 INDIANAPOLIS—Indiana University School of Medicine has picked an internationally recognized geneticist with more than two decades of experience with the institution to lead its $360 million research enterprise.

Tatiana Foroud, PhD has been named the new Executive Associate Dean for Research Affairs and IU Health’s Executive Vice President of Academic Affairs for Clinical Research, effective August 1, 2020. Foroud will continue serving in her role as chair of the Department of Medical and Molecular Genetics, a position she has held since 2015.

Over the course of her more than 25 years with IU School of Medicine, Foroud has played a key role in the evolution of research at the school.

“Tatiana has spent her entire academic career right here at IU School of Medicine. During that time, she has played a pivotal role in elevating IU School of Medicine to its place as one of the top public medical schools in the nation,” said Jay L. Hess, MD, PhD, MHSA, dean of IU School of Medicine and IU’s executive vice president for university clinical affairs. “As one of the school’s top researchers, as well as the leader of the Department of Medical and Molecular Genetics, Tatiana will bring to the role a wealth of expertise in both clinical and scientific research that will further enhance our academic mission and commitment to improving health and patient care.”

Foroud assumes leadership at a time of record-setting funding for IU School of Medicine. In 2019, a school record $189 million in research funding was received from the National Institutes of Health—demonstrating the school’s national leadership in critical fields like Alzheimer’s disease and pediatrics and providing a major boost to the Indiana economy. As a key player in the school’s research enterprise, Foroud played a critical role in that success.

“IU School of Medicine has undergone unprecedented research growth over the past five years. I have seen firsthand in my own research program and in the department the impact of the person who serves in this role,” Foroud said.

“I am excited to work with the talent within IU School of Medicine as well as with our scientific collaborators in the private sector throughout Indiana to continue the exponential growth of our research enterprise. Our research advancements in scientific knowledge and clinical care will improve the health of Hoosiers.”

The increase seen in 2019 propelled IU School of Medicine to 14th out of 92 public medical schools that receive NIH funding, and 28th out of 145 medical schools overall. For her part, Foroud is currently the principal investigator or multiple PI of seven NIH grants. Among those studies is the National Centralized Repository for Alzheimer’s Disease and Related Dementias. Led by Foroud, it collects and distributes biological samples like DNA, plasma and tissue from patients with dementia for use in research locally and nationally.

Foroud will also be taking over leadership of the IU Grand Challenge Precision Health Initiative—an effort aimed at producing a cure for at least one cancer through the development of new cell, gene and immune therapies, and developing novel disease-modifying or prevention methods for adult neurodegenerative diseases such as Alzheimer’s disease.

Foroud earned her master’s in biomathematics at UCLA, and later her PhD in population genetics from IU School of Medicine. Currently the Joe C. Christian Professor of Medical and Molecular Genetics, Distinguished Professor and Chancellor’s Professor, Foroud began her career at IU School of Medicine in 1994 as an instructor. Over the next two decades, she ascended the ranks to professor and later chair of the Department of Medical and Molecular Genetics—garnering invaluable experience along the way.

“Over these past 25-plus years, I have been a part of the evolution of research at IU School of Medicine, and have benefitted from the opportunities available within our institution,” Foroud said. “One of the primary reasons that I have remained at IU School of Medicine is the environment and support I have received from colleagues as well as the institution. I am proud to have the opportunity to lead one of the best medical research programs in the country—helping to reach our ultimate goal of speeding scientific discoveries that benefit Hoosiers and patients worldwide.”

Foroud has authored more than 700 scientific papers and received the Research Society on Alcoholism (RSA) Distinguished Researcher Award in 2019.

As Executive Associate Dean for Research Affairs, Foroud will succeed Anantha Shekhar, MD, PhD, who earlier this year was named senior vice chancellor for health sciences and dean of the School of Medicine at the University of Pittsburgh.