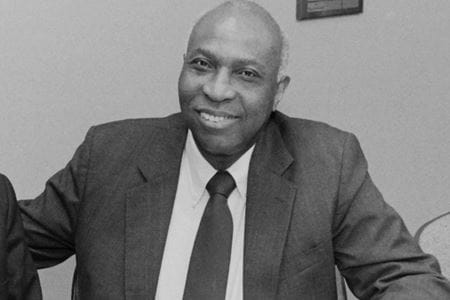 George H. Rawls, MD, Indiana University Clinical Professor Emeritus of Surgery and founding director of the Master of Science in Medical Science program at IU School of Medicine, passed away on Saturday, May 16, at age 91.

Dr. Rawls was a pioneer for African American surgeons in the Indianapolis community and was a lifelong advocate for advancing minority representation in medicine. After a distinguished 34-year career as a surgeon, Dr. Rawls retired in 1993 and then served as assistant dean of student affairs and clinical professor of surgery for five years at IU School of Medicine (1994-1999). In 2001, Indiana University awarded Dr. Rawls with an Honorary Doctor of Science degree to recognize his enduring efforts to increase representation of minorities in medical professions. His legacy includes facilitating increases in both the admission and graduation of underrepresented minority candidates at IU School of Medicine.

Dr. Rawls graduated valedictorian from Florida A&M University, where he earned his Bachelor of Science in Biology. He then matriculated to Howard University Medical School, where he earned his medical degree with Alpha Omega Alpha (AOA) honors. He served in the U.S. Army for two years and completed his surgical residency at The Ohio State University and a surgical internship at Philadelphia General Hospital.

In 1959, Dr. Rawls became one of the first black physicians to practice surgery in Indianapolis. Earlier this year, he was one of nine IU School of Medicine academic surgeons spotlighted as part of a traveling exhibit called “Opening Doors,” celebrating the achievements of African American pioneers in medicine and recognizing contemporary African American academic surgeons who not only exemplify excellence in their fields but also have demonstrated commitment to educating and mentoring the next generation of African Americans physicians.

Recognizing the need for equitable representation in medical education, Dr. Rawls helped launch the Master of Science in Medical Science (MSMS) program in 1995. Now celebrating its 25th anniversary, the MSMS pipeline program has graduated 449 students, with 302 matriculating into medical school.

In addition to the success of the MSMS program, Dr. Rawls’s legacy lives on through many other IU School of Medicine and community initiatives:

In addition to these honors, Dr. Rawls held leadership positions with several professional organizations, including serving as president of the Marion County Medical Society, the Indiana State Medical Association and the Aesculapian Medical Society. He was also a long-term member and past president of the Indiana State Medical Licensing Board. Additionally, he has authored several books.

IU School of Medicine is grateful for Dr. Rawls’ many contributions, most notably as a mentor and champion for underrepresented in medicine students. His legacy of inclusion has impacted not only the university but the broader medical community in the state of Indiana, ensuring our future physicians better represent the populations they serve.

If you would like to share a memory of Dr. Rawls or leave condolences for his family, please fill out this form, which also gives the option of uploading any photos you may like to share. A virtual memorial service is being planned in the coming weeks.

At the family’s request, in lieu of flowers, memorial donations may be made to Dr. Rawls’ church community: