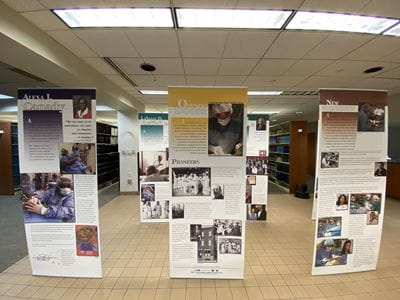 The journey of the African American physician from pre-Civil War to modern day America has been a challenging one. Early black pioneer physicians not only became skilled practitioners—they became trailblazers and educators, paving the way for future physicians, surgeons and nurses, and opening doors to better health care for the African American community.

The achievements of these pioneers in medicine is being celebrated by highlighting contemporary pioneer African American surgeons and educators who exemplify excellence in their fields and believe in continuing the journey of excellence through the education and mentoring of young African Americans pursuing medical careers.

The exhibit is open to the public for viewing. Locations and viewing hours are listed below.

*Note: Exhibit will not be on display on Wednesday, February 26

*Note: Exhibit will not be on display on March 3

There will also be a special event on March 4 to celebrate the exhibit and recognize the legacy and contributions of African American academic surgeons at IU School of Medicine. This event is open to the public. Time and location details are listed below.

The Opening Doors: Contemporary African American Academic Surgeons exhibit was developed and produced by the National Library of Medicine and the Reginald F. Lewis Museum of Maryland African American History and Culture. The residency and celebration of the Opening Doors exhibit is possible thanks to the collaborative work of several Indiana University School of Medicine departments and offices, Indiana University-Purdue University-Indianapolis (IUPUI) and the city of Indianapolis.

Click here to view and download photos of the exhibit on display at the Ruth Lilly Medical Library.