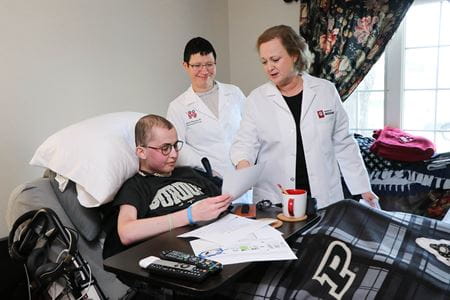 INDIANAPOLIS – Researchers at Indiana University School of Medicine have found a combination therapy that significantly slows tumor growth in models, built from cells taken from Tyler Trent’s tumors. Tyler was a Purdue University student and football superfan who died on January 1, 2019, after waging a long and valiant fight against an aggressive form of bone cancer.

The researchers, led by Karen E. Pollok, PhD, found a variation in Tyler’s tumors (TT1 and TT2) called the MYC-RAD21 signature, which has been found in tumors that tend to recur. Pollok says there are two drugs that can block its effects, a Chk1 inhibitor (pronounced: “check-one” inhibitor) and a bromodomain inhibitor. Her team tested each of those drugs individually, as well as in combination.

“What we found in Tyler’s model is we can take one of these drugs, the Chk1 inhibitor or the bromodomain inhibitor, and we can administer it in models with the TT2 tumor and we get the tumors to stop growing some, compared to a control,” said Pollok. “However, when we put the two drugs together, we block the growth of these tumors substantially.”

Pollok and her team found that the combination therapy worked during a four-week treatment, but the tumor started growing again after stopping the therapy. They also determined that the treatment was well-tolerated. Pollok says they are very pleased with the results so far.

“Tyler Trent has truly left us a legacy,” said Pollok. “While we still have much work to do, we are hopeful that new therapies for osteosarcoma will be possible in the near future.”

Finding a cure for pediatric sarcomas, including osteosarcoma, is one of the focuses of the Indiana University Grand Challenges Precision Health Initiative. In addition, the number one fundraising priority of Riley Children’s Foundation, the fundraising arm for Riley Hospital for Children at IU Health, is pediatric research. The work is being done at the Herman B Wells Center for Pediatric Research at IU School of Medicine. During Thursday’s media availability at the Wells Center, Tyler’s parents, Kelly and Tony, will also share their hopes for a cure as they honor their son’s memory.

The researchers’ next steps include better understanding how the tumors adapt to the treatments and optimizing the combination therapy.

Tyler’s legacy as a research advocate started years ago while he was a patient at Riley Children’s Health. He donated several tumor samples to cancer researchers at IU School of Medicine and nationally advocated that others do the same.

Tyler also encouraged people to donate money to support research. People have donated millions of dollars for cancer research in Tyler’s name, including approximately $180,000 for the Tyler Trent Cancer Research Endowment for Riley Hospital. The Trent family and Riley Children’s Foundation worked together to create the endowment fund, which supports pediatric research being conducted by IU School of Medicine researchers.

Click here for media kit, including graphics to illustrate effects of combination therapy.