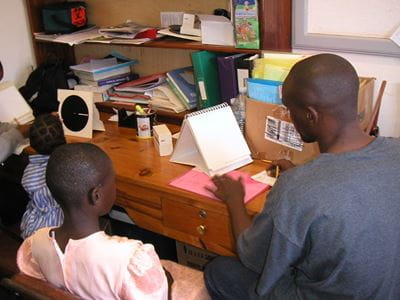 Malaria continues to be a major threat to public health for much of the world’s population. In 2017, more than 400,000 malaria-related deaths were reported globally, and over 90 percent were in sub-Saharan Africa. Almost two-thirds of the deaths were in children.

The most severe and deadliest form of the parasitic disease is cerebral malaria, a condition that is most often diagnosed in children under 5 years old and is characterized by a malaria-related coma. In those who survive, risk for long-term impairment is increased.

Understanding how this impairment develops is a major focus of Chandy John, MD, and his research team at Indiana University School of Medicine. In a recent study published by Clinical Infectious Diseases, John’s team presents novel findings about one possible factor: a protein called tau.

The study found that elevated levels of tau in cerebrospinal fluid (CSF) is related to long-term neurocognitive impairment in children recovering from cerebral malaria.

“Our results show a strong association of CSF tau with clinical factors that reflect disease severity,” said Dibyadyuti Datta, MS, PhD, assistant professor of pediatrics and lead investigator of the study. “Importantly, this is the first study to conclusively show that brain injury during the acute phase of cerebral malaria is associated with long-term neurocognitive outcomes.”

The tau protein has an important function in the central nervous system. It is responsible for the structural integrity of the axons that extend off of neurons, or nerve cells. Collectively, these work together to transmit signals from the nerve cells to other parts of the body.

But in excess, CSF tau is a marker for acute axonal injury in the brain. In fact, different isoforms of the protein are linked to a number of neurological conditions, such as traumatic brain injury and Alzheimer’s disease. With this in mind, John’s team wondered if increased levels of CSF tau in children with severe malaria could be linked to disease severity and neurocognitive impairment.

To find out, they measured CSF tau in 145 Ugandan children with cerebral malaria upon clinical admission. During the children’s hospitalization, researchers tracked indicators of disease severity and measured cognition upon discharge. They followed up with the children at six, 12 and 24 months after discharge for additional cognitive testing.

Datta said that the John Lab is working with new tools to identify instances of brain injury in severe malaria using blood biomarkers instead of CSF biomarkers, which rely on invasive lumbar punctures. She said that she hopes this and future studies will lay important groundwork for early detection of neurocognitive impairment and the exploration of cognitive rehabilitation therapies for children recovering from severe malaria.

The above reference project is titled “Elevated cerebrospinal fluid tau protein concentrations on admission are associated with long-term neurologic and cognitive impairment in Ugandan children with cerebral malaria”, and is funded by the National Institute of Neurological Disorders and stroke, project number R01NS055349; and the Fogarty International Center, project D43 NS078280. The study was published on May 2, 2019 by Oxford University Press for the Infectious Diseases Society of America.

This study was lead by Dibyadyuti Datta, PhD, assistant research professor of pediatrics and first author of the study manuscript.

Other contributing authors of this study represent the Makerere University College of Health Sciences and the University of Minnesota.