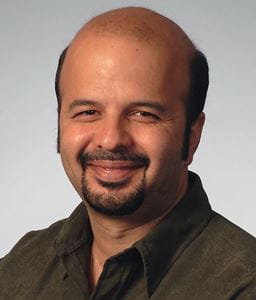 Indiana University School of Medicine researcher Reuben Kapur, PhD, has received more than $1.8 million to research the mechanisms that lead to a rare blood cancer called acute myeloid leukemia (AML). Kapur will closely examine the interaction between certain cellular mutations believed to contribute to the development and relapse of AML. The grant was awarded by the National Cancer Institute and will support this project for the next five years.

Kapur conducts his research at the Herman B Wells Center for Pediatric Research and the IU Simon Cancer Center, where he focuses on blood-related disorders, such as juvenile myelomonocytic leukemia and Diamond-Blackfan anemia. AML, which is most often diagnosed in adults, affects the maturation process of new blood cells and is known for its quick progression.

While chemotherapy is often curative for AML, relapse is not only common but is the leading cause of death in patients over 60 years old. These patients, who make up about 90 percent of all people with the condition, have only a 15 percent overall cure rate. Kapur’s work may help identify the underlying factors that lead to the disease and discover new targets for prevention of relapse.

Earlier studies from Kapur demonstrated that certain mutations on blood stem cells can result in high levels of a long non-coding RNA called Morrbid. His research team found that Morrbid enhances the survival and spread of pre-leukemic cells. Now, Kapur will expand on this knowledge by determining the driving forces behind progression of pre-leukemic cells to AML and relapse.

The project referenced above is titled Role of Shp2 in FLT3-ITD induced leukemogenesis, project number 2R01CA134777-06A1. Funds have been awarded by the National Cancer Institute.