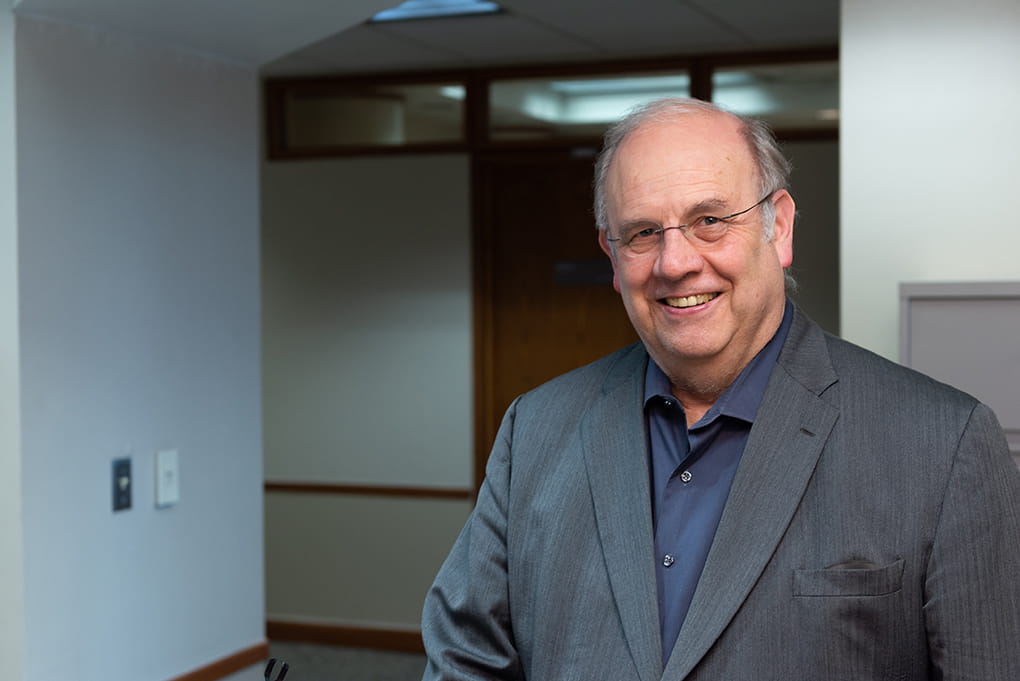 Over the past three decades, Wade Clapp, MD, rose to chair the Department of Pediatrics, co-leader of the School of Medicine’s dual-degree program, and an expert in neurofibromatosis research.

LONG BEFORE Wade Clapp became a renowned researcher, a department chair, and a mentor to physician-scientists, he used lunchtime flights to launch his career.

In his early years on the IU faculty, Clapp, MD, and a colleague wanted to understand why some patients with the genetic disorder, neurofibromatosis type 1 (NF1), develop leukemia. Clapp extracted cells from a cutting-edge mouse model and did cell biology studies, while Kevin Shannon, MD, did biochemistry on them in his lab.

There was just one small problem: Clapp’s lab at Indiana University School of Medicine was separated from Shannon’s at the University of California-San Francisco by roughly 2,250 miles. Undaunted, the duo made three time zones work in their favor. Clapp started experiments in the morning, packed up cells in a Styrofoam cooler, drove them to the airport and shipped his cargo in an unusual place.

“They’d fly in the cockpit,” said Clapp, the chairman of the Department of Pediatrics. “Then Kevin picked the cells up at the San Francisco airport and finished the experiments in his lab. It’s really incredible to think about that. We were so appreciative of the airline and the pilots for their generosity.”

It’s just one of many examples Shannon, a professor of pediatrics at UCSF, uses to explain a basic element of Clapp’s character. “He finishes what he starts,” he said. “He’s a clear thinker. He decides what experiments he wants to do, and he executes them. Then he moves on to the next one.”

WHEN CLAPP began investigating NF1, study of the disease was relatively immature. There were no treatments available.

What was known was basic: patients—often children—are born with only one functional copy of the NF1 gene. Tumors form when certain cells, including those that cover nerves, lose this normal copy. Beyond that, no one could clearly explain what spurred their growth.

Today, we understand much more and Clapp’s research is a significant reason why.

Over the past two decades, he and other collaborators pieced together many of the biochemical processes that unfold as the tumor forms. His mouse models were essential testing beds for a therapy that shrinks tumors in very young children. They were also used to help evaluate a cancer drug which disrupts a key pathway in tumors that won FDA approval. “We spent a lot of time focusing on key nodes for those tumors,” he said. “That’s been transformative and the work continues to evolve.”

Those successes helped Clapp, physician-in-chief at Riley Hospital for Children, earn the Friedrich von Recklinghausen Award, a prestigious honor given for contributions to neurofibromatosis research and service. He was also recently elected to the National Academy of Medicine, one of the highest honors in health and medicine. Meanwhile, his active lab at IU School of Medicine has racked up substantial grant funding from the National Institutes of Health.

“Working through projects is the best way to teach,” said Clapp. “I view the students as partners. They don’t work for me. We work together, and that’s awesome.”

THE PATH that Clapp followed needed clearing, however.

While studying at Hanover College, Clapp spent a summer working with children struggling with learning disabilities. It inspired him to pursue pediatrics. His work in research came later, but the route wasn’t so straightforward.

In the late 1970s, IU School of Medicine didn’t offer a streamlined way to earn dual medical and doctoral degrees. Instead basic science programs operated in silos. It hardly mattered that a medical course’s content might closely mirror requirements for a PhD program. Those credit hours couldn’t be applied elsewhere.

“It took longer,” Clapp recalled. “There was also little flexibility as to when you could go back to medical school.”

It wasn’t until Clapp arrived for his fellowship at Case Western Reserve University that he found a climate conducive to translational research. “Physicians intermingled with basic science faculty regularly,” he said, “and trainees would routinely benefit from the acumen of both groups. It was a fantastic experience for somebody who wanted to do science but was pretty naïve scientifically.”

For Clapp, who arrived at IU in 1991, the allure of running a lab was practical. Often, the pool of patients stricken with pediatric diseases is small, leaving drug companies wondering whether it’s worth investing in developing new treatments. Researchers like Clapp play a key role in advancing drug development with research that fills in key knowledge gaps and provides clues as to whether a drug is likely to work.

“If not us, then who is going to advocate for those kids?” Clapp said.

The results of his early research could have gone unnoticed. Clapp studied how fetal liver cells evolved into different components of blood. Around the same time, Shannon, a pediatric oncologist, was trying to understand why some pre-term babies struggle to produce red blood cells.

Their paths eventually crossed at a conference in the late 1980s. Clapp was hard to miss. “He’s a big guy,” Shannon said. “He has a deep voice. And he’s real friendly. All those things in academic medicine are relatively uncommon.”

Their chats eventually spawned collaboration, one where Clapp’s technical savvy with mouse models came in handy. “We cross-trained each other,” Clapp said. By the late 1990s, their interests diverged. Shannon’s lab focused on why blood cancer cells become resistant to therapy, while Clapp wondered how abnormal cells in NF1 patients grew into tumors.

“You can see how he got there, but it’s an unusual path,” Shannon said. “That’s not following the course for a neonatal pediatric scientist.”

LIKE MANY tumors, those in NF1, which afflicts roughly 1 in 3,000 people, take advantage of non-malignant cells in their vicinity.

Clapp and other collaborators spent nearly a decade meticulously laying out the mechanics. Their work revealed that abnormal cells in the tissues covering nerves recruit inflammatory mast cells from the bone marrow. Once the mast cells arrive, they spark the creation of a network of cells, including blood vessels, to support a growing tumor.

By October 2008, Clapp and Luis Parada, PhD, who oversees the Brain Tumor Center at Sloan Kettering Cancer Center, laid out an explanation published in the journal Cell. The findings inspired IU to launch a clinical trial exploring whether the drug Gleevec, which can disrupt mast cells’ signaling, might be a useful treatment for very young children.

“We’ve always been translationally focused,” Clapp said. “That led to the first successful therapy in babies and young children.”

Since 2013, the lab has carried out critical preclinical studies on two other drugs that showed the potential to shrink tumors. One of these, selumetinib, was originally developed to treat lung cancer, though it came up short in clinical trials when used alone. Yet the mechanism selumetinib targets is also involved in neurofibromatosis. The data from Clapp’s lab helped contribute to a clinical trial led by Brigitte Widemann, MD, at the NCI and its subsequent FDA approval. When the FDA signed off on it this spring, selumetinib became the first treatment available for the majority of patients with the disease.

“Given our initial success using the preclinical model to identify drugs with therapeutic efficacy in clinical trials,” Clapp said, “we are now poised to evaluate other drug targets and drug combinations to obtain even greater efficacy and reduced side effects.”

CLAPP ALSO laid down a roadmap for those who want to follow his path.

In 2001 the School of Medicine tasked him and a colleague, Maureen Harrington, PhD, a professor in the Department of Biochemistry, with formalizing its MD/PhD track. Aside from selling basic science departments on participating, Clapp and Harrington needed to secure funding to support students on their eight-year journey. Winning an NIH-backed grant and a generous gift from the Lilly Endowment made this possible. Today, seven students a year begin their training knowing the cost is covered.

“He had to build that from scratch,” said Shannon, who led a similar program at UCSF. “It meant convincing the medical school leadership that this will have value.”

One of those students was Steven Rhodes.

Almost 12 years ago, the West Lafayette native sat down for an interview with Clapp having little idea what he wanted to study. Clapp produced a series of scans from a 3-year-old girl with a plexiform nerve tumor located at the base of her neck. As it grew, it pressed on her airway. It was slowly choking her.

Yet, there was good news. Clapp had shown that Gleevec was effective in treating mice with these tumors—and it was FDA approved for other cancers in young children. Pediatric hematologists at Riley treated the girl with Gleevec. Afterward, her growth shrank by 70 percent. “It was awe-inspiring,” Rhodes recalled. By meeting’s end, he had a mentor.

Today, Rhodes, who graduated with his medical degree in 2015, is wrapping up a pediatric oncology fellowship. Like Clapp, Rhodes, MD, PhD, was drawn to pediatrics and cancer biology, especially what causes some plexiform tumors to become malignant. While he spends a day each week in clinic caring for children with NF1, the bulk of his time is spent trying to answer that question.

It’s also built off the insights Clapp first revealed. It turns out the cells driving tumor growth eventually lose the ability to grow and divide. However, Rhodes and other researchers found a second mutation that overrides that stopgap. When patients have both, growths in the lining of their nerves can become cancerous.

“We’re bringing in all of the state-of-the-art technologies that we simply didn’t have five to 10 years ago,” Rhodes said. “It allows us to take a very deep look at the molecular machinery within the cell that’s been reprogrammed.”

Early on, Clapp’s advice was practical, guiding Rhodes in setting up experiments, deciding controls, and analyzing data. The lessons now are more nuanced and geared toward helping the 35-year-old launch his career. “I don’t see a student anymore,” Clapp said. “He’s a colleague about to go on his path.”

Instead of meeting in a lab, these days Clapp and Rhodes, who is completing his fellowship at Riley, sit in front of a shared computer. When Rhodes crafts grant proposals or responds to critiques of papers that he submits to journals, he draws on Clapp’s wisdom. “The question usually is, ‘How is this going to matter for our patients?’” Rhodes said. “How can we get people to understand that? If they do, they can see how this is going to impact the field. Wade is a master at that.”

And one who excels at plying his trade. 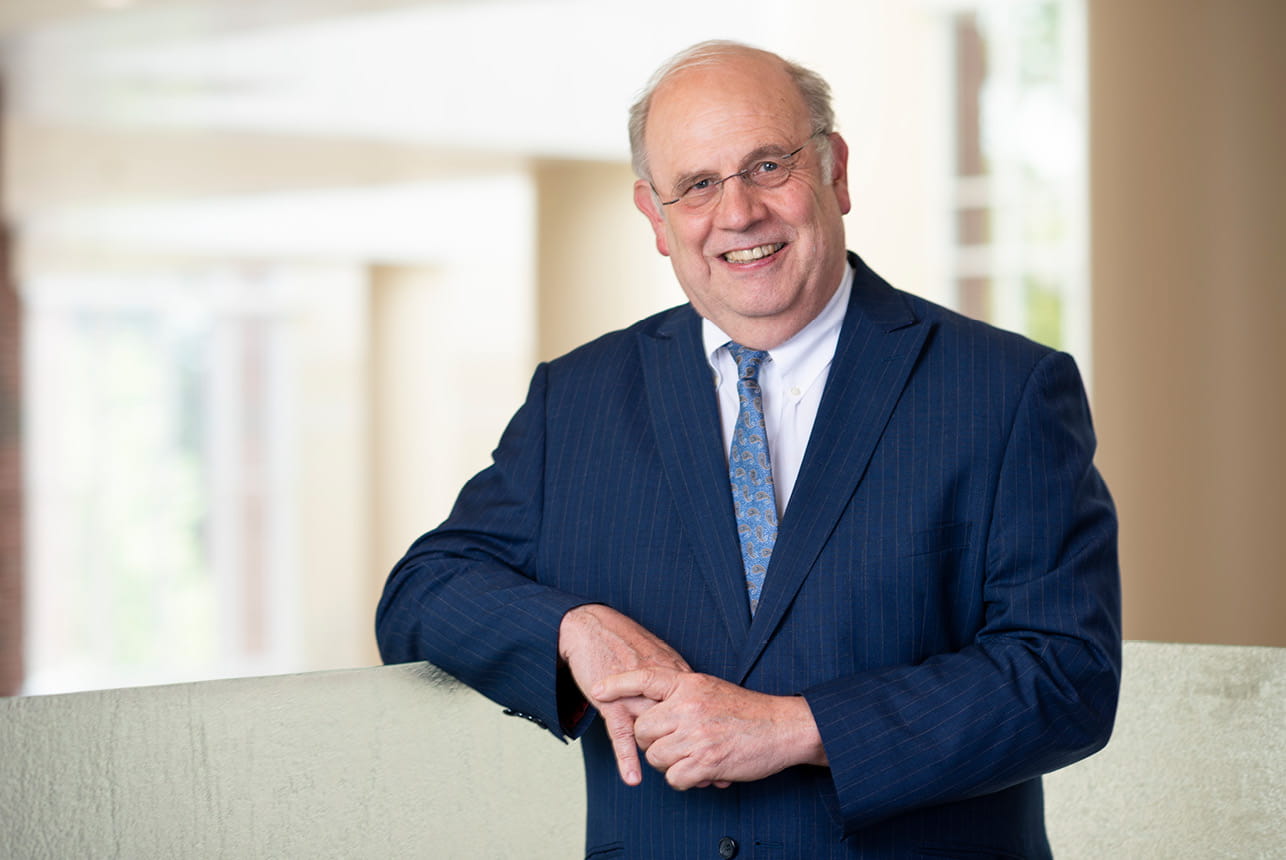 An Indiana University cancer researcher is leading an $11.4 million grant from the National Cancer Institute in which he and others across the country will work on identifying new treatments for tumors that develop in children, adolescents and adults with a common genetic condition.