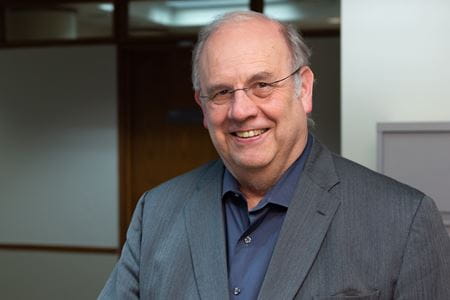 INDIANAPOLIS—D. Wade Clapp, MD, chair of the Department of Pediatrics at Indiana University School of Medicine, has been elected to the National Academy of Medicine (NAM).

The group announced the election of 100 new members during its annual meeting on Monday, October 19, 2020. Election to the academy is considered one of the highest honors in the fields of health and medicine and recognizes individuals who have demonstrated outstanding professional achievement and commitment to service.

Clapp, the Richard L. Schreiner Professor in the Department of Pediatrics, is a neonatologist and physician-in-chief at IU Health Riley Hospital for Children. Clapp runs an active lab at IU School of Medicine, producing internationally acclaimed research and receiving grant funding from the National Institutes of Health (NIH). According to the academy, Clapp was elected as a member for work that has led to fundamental new insights into the pathogenesis of neurofibromatosis and improved lives for children and adults with this disorder. In addition, Clapp’s creation of robust career development programs for trainees and faculty to become leaders themselves was highlighted by the group.

“Wade is not only a top physician-scientist, but he has also been a leader in training the next generation of physicians and scientists” said Jay L. Hess, MD, PhD, MHSA, dean of IU School of Medicine. “His contributions to the field of neurofibromatosis have undoubtedly helped to improve the lives of people with this disorder. This recognition from the National Academy of Medicine is much deserved. We could not be more proud of him for all he has accomplished”

After earning his medical degree and completing residency at IU School of Medicine, Clapp was a fellow in neonatology and experimental hematology at Case Western Reserve University before returning to IU as a faculty member, starting his lab in 1991. He has served as chair of the Department of Pediatrics since 2009.

“It is an honor to join this distinguished group of leaders from all around the world,” Clapp said. “I would like to extend a sincere thank you to everyone who has supported my work through the years, including family, friends, colleagues and students.”

New members are elected by current members through a process that recognizes individuals who have made major contributions to the advancement of the medical sciences, health care and public health. A diversity of talent among NAM’s membership is assured by its Articles of Organization, which stipulate that at least one-quarter of the membership is selected from fields outside the health professions—for example, from such fields as law, engineering, social sciences and the humanities.

The newly elected members bring NAM’s total membership to more than 2,200 and the number of international members to approximately 175.

“This distinguished and diverse class of new members is a truly exceptional group of scholars and leaders whose expertise in science, medicine, health and policy will be integral to helping the NAM address today’s most pressing health challenges and inform the future of health and health care for the benefit of everyone around the globe,” said National Academy of Medicine President Victor J. Dzau. “It is my privilege to welcome these esteemed individuals to the National Academy of Medicine.”