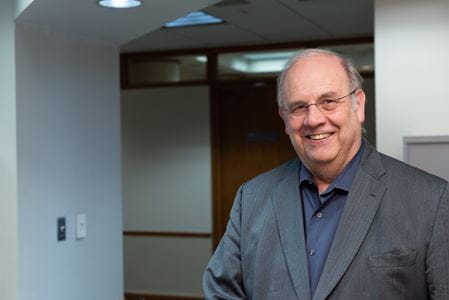 When Wade Clapp, MD, an endowed professor and chair of the Department of Pediatrics at Indiana University School of Medicine, started studying neurofibromatosis (NF) in the 1990s, there wasn’t much known about this disease which causes tumors to grow on nerves, often beginning in childhood. Now Clapp is recognized as an expert in the field and a leading contributor to collaborative, multidisciplinary research which has significantly advanced treatment.

Children’s Tumor Foundation (CTF) recently honored Clapp with the prestigious Friedrich von Recklinghausen Award, recognizing his significant contributions to neurofibromatosis research and clinical care. Clapp, a neonatologist and physician-in-chief at Riley Hospital for Children, runs an active lab at IU School of Medicine, producing internationally acclaimed research and receiving grant funding from the National Institutes of Health (NIH). He is also a member of the IU Melvin and Bren Simon Comprehensive Cancer Center.

"Dr. Clapp is one of the rare physician-scientists who is making significant breakthrough contributions to all forms of NF. From his contributions to the basic understanding of NF to the creation of key preclinical models, he is considered by many to be the global gold standard in this broad role,” said Annette Bakker, PhD, president of the Children's Tumor Foundation. “Dr. Clapp’s list of accomplishments in NF is very long, and he truly stands out in his commitment to unique collaborations."

After earning his medical degree and completing residency at IU School of Medicine, Clapp was a fellow in neonatology and experimental hematology at Case Western Reserve University before returning to IU as a faculty member, starting his lab in 1991. Clapp soon accepted the opportunity to join Kevin Shannon, a colleague at University of California, San Francisco, in studying a genetically engineered mouse model with disruption of the NF1 gene. This research laid the groundwork for further study, eventually leading to the first targeted therapies for NF patients.

Clapp went on to develop other preclinical models that accurately represent tumor development in NF1 patients. Using those models, he has pursued basic biochemical understanding of the NF1 gene, led preclinical testing and participated in clinical testing for several drugs showing promise for shrinking tumors and alleviating pain. In April 2020, the U.S. Food and Drug Administration (FDA) approved the first drug to treat NF1—30 years after the discovery of the NF1 gene and 138 years since von Recklinghausen, a German pathologist, first described this disease characterized by inoperable tumors, which can grow anywhere in the body. An estimated 1 in 3,000 people in the U.S. are born with this debilitating and often disfiguring disease.

“Wade’s research contributed to the knowledge that led to that FDA approval,” said Jaishri Blakeley, MD, director of The Johns Hopkins Comprehensive Neurofibromatosis Center. “Wade and his team have made sophisticated mouse models that strongly predict what we will see in patients, and that is really, really remarkable.”

“He’s such a darn good scientist,” added Blakeley, who has served as co-principal investigator with Clapp on two grant-funded research projects for neurofibromatosis. “He provides the details, explanations and all the scientific context that is so incredibly rich and valuable–everything that’s needed to make decisions before you invest in a clinical trial.” 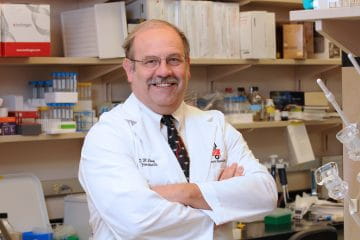 Blakeley first met Clapp in 2012 as she sought the world’s leading NF researchers for the Neurofibromatosis Therapeutic Acceleration Program (NTAP), which focuses exclusively on improving treatment options for neurofibroma type-1 (NF1) patients who have plexiform neurofibromas—extensive tumors that grow from nerves and may turn cancerous.

“These previously untreatable tumors caused major morbidity,” explained Clapp. “Traditional chemotherapy and radiation therapy doesn’t work. Since these tumors grow out of nerves, surgeons aren’t enthusiastic to cut them out.”

NTAP’s approach is defined by intense collaboration and designed to accelerate exploratory research of the most promising treatments to ensure patients benefit as quickly as possible. In forming the initial, interdisciplinary team, Blakeley said she “looked around the world, and first on that list was Wade Clapp.”

“He’s long been a major leader in NF1 research and understanding the biology of NF1 and specifically how to apply what he learns to treatment of NF patients,” said Blakeley. “I had read all his papers. I really wanted to learn from the master.”

Not only is Clapp a top scientist, he’s known for his generosity and collaborative spirit, say his colleagues.

“Wade is a big believer in team science,” Blakeley said. “And he is determined that whatever he discovers in the lab translates into making patients better.”

The first drug to show promise for shrinking tumors in NF1 patients was Gleevec, which proved effective in mouse models at Clapp’s lab and went into clinical trials after his team published its results in 2008. For Southern California mom Mindi Hampton and her then 3-year-old daughter, Emily, this was life-changing.

Emily was diagnosed with NF1 at 13 months when an MRI showed a complex tumor system engulfing her trachea, explaining why she was unable to swallow solid foods, experiencing sleep apnea and losing muscle tone in her neck. A specialist at the local children’s hospital teared up as he told Emily’s mother the tumors were inoperable and there were no effective treatments to help. 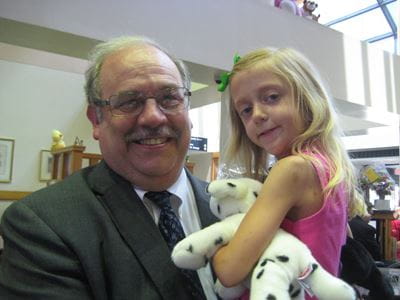 Mindi said she didn’t sleep for three years because she was constantly repositioning Emily so the child could breathe. All seemed hopeless until Mindi read a Children’s Tumor Foundation article about a clinical trial being conducted at Riley Hospital for Children in Indianapolis. Mindi got in touch with Kent Robertson, MD, PhD, FAAP, who was leading the clinical trial, and a spot was opened for Emily.

“As soon as we got to Riley and met Dr. Robertson and Dr. Clapp and that whole team of people, I knew it was going to be okay,” Mindi recalled. “The first time we met Dr. Clapp, his smile put me at ease. You could just tell this guy has a heart for kids—cares about my kid—and is going to do whatever needs to be done for all NF kids. That’s just who he is.”

As a result of Emily’s participation in the clinical trial and continued use of Gleevec through age 9, her tumors shrank by about 20 percent. Today, she is off the drug and is thriving at age 16, her mother reports.

Because of Emily’s story and the remarkable preclinical work done in Clapp’s lab, one philanthropist at Riley’s annual luncheon told Mindi he was inspired to donate $1 million for continued research.

Another person greatly impacted by the life-changing outcome for Emily was Steven Rhodes, MD, PhD, a junior physician-scientist working in Clapp’s lab. Rhodes’ career path was solidified after he witnessed the real-life impact of the “bench” work done in Clapp’s lab. A pediatrician with Riley Hospital at IU Health, Rhodes is committed to researching neurofibromatosis and was recently named a Francis S. Collins Scholar, securing support from NTAP so he can exclusively focus on treatments for NF1.

“Wade is always driving those around him to ask big questions—difficult questions that might take years to answer—but questions that really, really matter for patients,” said Rhodes of his mentor.

In addition to Clapp’s work with NF1, he has led and collaborated on research for the rarer neurofibromatosis type 2 (NF2), which manifests in tumors on the nerve that carries sound and balance information from the inner ear to the brain, often leading to hearing loss, as well as a third type of neurofibromatosis known as Schwannomatosis.

In 2014, Clapp and Blakeley teamed up to lead a consortium of scientists, clinicians and other experts known as Synodos, funded by CTF. In 2015, IU School of Medicine was awarded a highly competitive grant funded by the National Cancer Institute’s Specialized Programs of Research Excellence (SPORE) aimed at discovering new treatments for NF1 and related cancers and disorders. As principal investigator, Clapp has led this five-year, $12 million national research project.

“We were the first group to have this type of large translational grant. It’s unique and involves collaboration with multiple institutions,” explained Clapp. “Working with genetic diseases which are not as common, you need multiple institutions to get enough patients for clinical trials. This grant has brought together distinguished people with very broad expertise.”

Leading the way at IU

The Clapp laboratory at IU School of Medicine continues to conduct important translational research to help people living with neurofibromatosis. And Clapp ensures this valuable work will continue by mentoring the next generation of physician-scientists specializing in NF research.

“He’s had that ability to bring the experts together and link the science to the clinic in ways that are so powerful,” said Rhodes. “I consider Wade to be a tremendous mentor and role model. One of the qualities I appreciate the most about him is his uncanny ability to see the potential in ideas, and in people, and to help them grow and evolve. He’s able to assemble a great group of people—with their own skillsets and expertise—and get them to work together to tackle big problems. He is so generous and fosters a wonderful team environment in the lab.”

An Indiana University cancer researcher is leading an $11.4 million grant from the National Cancer Institute in which he and others across the country will work on identifying new treatments for tumors that develop in children, adolescents and adults with a common genetic condition.