'There was too much to learn': Remembering Hal Broxmeyer

The pioneer of cord blood transplantation was dogged in every pursuit—as a scientist, a mentor, a colleague, and as a father. He also leaves behind an indelible impact on the patients saved by his work and at IU School of Medicine. 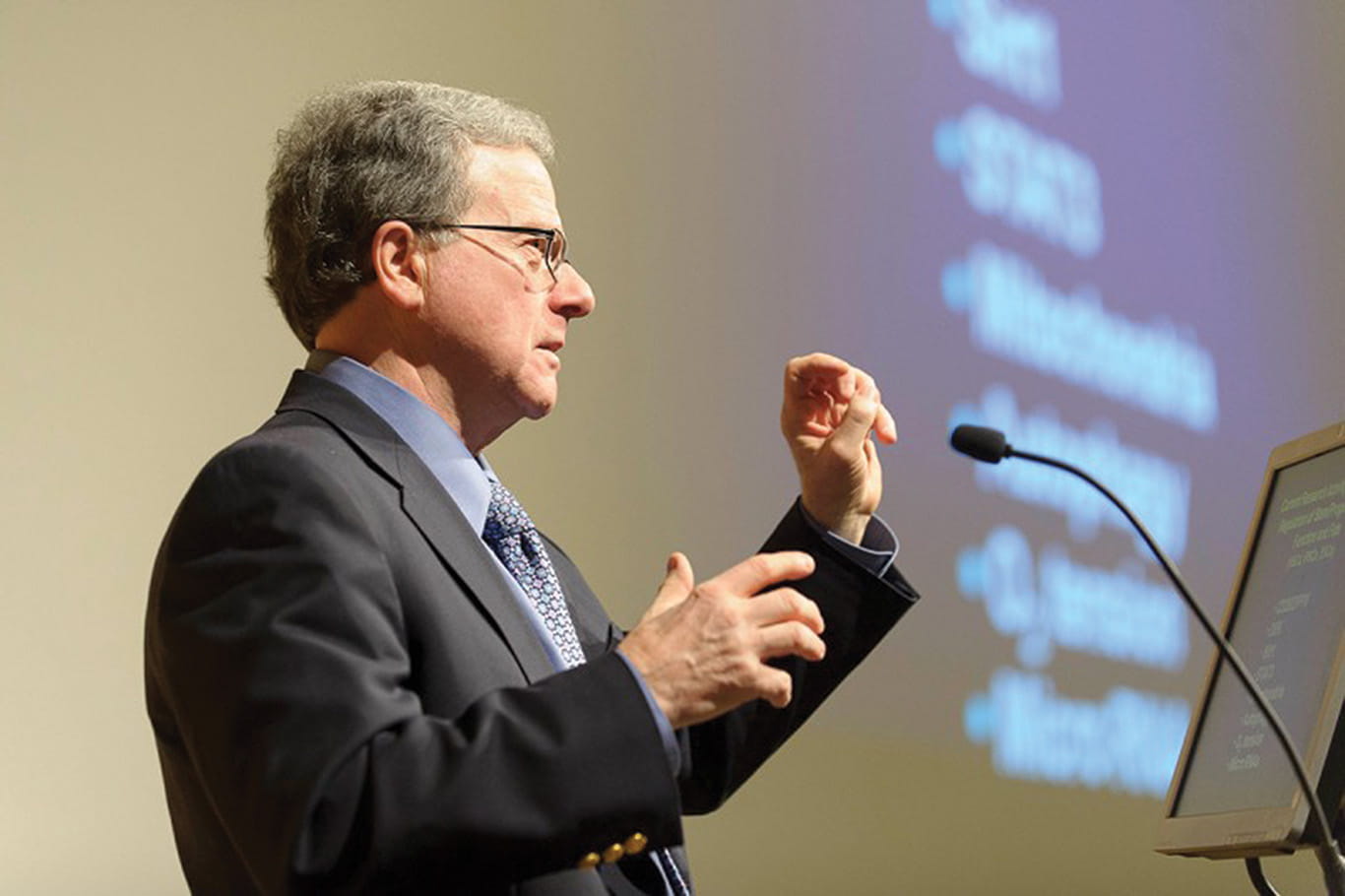 ON AN OCTOBER night in 1988, as he rested in a Paris hotel, anxious thoughts passed through Hal Broxmeyer’s mind. Nearby, cool autumn air drifted in through an open window. Occupying most of one corner of his cramped room was a dry shipper—a massive container for transporting items at liquid nitrogen temperatures—he’d dubbed “Big Boy.”

The shipper’s contents–five ounces of blood taken from an umbilical cord—had been delivered and infused into a very sick boy now in a sterile room at one of Paris’ oldest hospitals. Broxmeyer had been checking on the boy’s condition for days. And now, if anything, the shipper was a manifestation of uncertainty.

The young patient, Matthew Farrow, was a living beta test of a new way to treat blood and bone cancers through the transplantation of stem cells from cord blood. Broxmeyer, who died in December at age 77 from complications of the thyroid cancer he battled for seven years, would become renowned as a pioneer of cord blood transplantation—work that he developed over decades at Indiana University School of Medicine.

But, during those pivotal days in Paris, Broxmeyer’s anxiety was understandable: The stem cells needed to take root and begin replacing the blood system that the boy’s bone marrow could not maintain. “There was literally nothing I could do for him,” Broxmeyer recalled in 2015. “I was just waiting like everyone else.” Sleep was elusive. Over in the corner, that Big Boy was fuming gas, making the interlude even a bit dangerous.

“Nitrogen displaces oxygen,” Broxmeyer said. “I had to keep the window open so that I wouldn’t die. I was shivering with all the covers on top of me.”

Only three weeks later, after he flew back to Indianapolis, did Broxmeyer receive the notification he coveted: Farrow’s blood count came back normal. The living beta test had worked. Over the next three decades, cord-blood transplants would go on to save more than 40,000 lives. Remembering those days in Paris, Broxmeyer would later conclude: “Embracing a little discomfort was worth it.”

Those words might be a fitting descriptor of Broxmeyer, his lab, his mentality as a weightlifter, his duel with thyroid cancer, and his stints leading the Walther Oncology Center and Department of Microbiology & Immunology at IU School of Medicine. He pushed himself—and his science—until the end.

In late January, friends, colleagues, and collaborators spent nearly two hours sharing memories of Broxmeyer’s work ethic, mentoring, lab culture, and lasting impact. “It’s been a tremendous pleasure to know this remarkable scientist in person,” said Dean Jay L. Hess, MD, PhD, MPH. “His spirit lives on in our laboratories and through his trainees across the country. I’m very proud we had him on our faculty. I’ll miss him terribly.”

BROXMEYER WAS BORN in Brooklyn, N.Y. on Nov. 27, 1944. He grew up going to Brooklyn Dodgers baseball games at Ebbets Field and emulating his heroes during stickball games in the street. One of the few connections he severed in life came when the Dodgers bolted for Los Angeles.

He attended Brooklyn College, where he ran track and threw the javelin and shot put on his way to graduating in 1966. As a doctoral student at New York University, he spent three years toiling on a project assigned to him by his mentor. His findings went unpublished. But five side-projects he carried out in his spare time all landed in journals. “I knew I was technically good,” he later recalled. “That taught me to trust myself.”

In 1976, he began working as a researcher at Sloan-Kettering in New York. Over his seven years there, the subway often served as Broxmeyer’s mobile office. On jostling commutes, he’d meticulously plot out experiments, then spend the same ride the next day crunching data or composing abstracts. “

Was I a monomaniac?” Broxmeyer mused several years ago. “Probably.”

That torrid pace enabled him to publish 838 papers that have been cited more than 72,000 times. But his tempo was so quick it sometimes made it hard for peers to validate his findings early on. “People didn’t believe him,” said Louis M. Pelus, PhD, who worked with Broxmeyer at Sloan-Kettering and at IU. “Hal didn’t give up. That was not his way. He just had to bang away and bang away. Keep producing data and keep talking about it.”

ASSIGNING SCIENTIFIC credit can be tricky, and the pioneering work in harvesting hematopoietic stem cells is no exception. The idea originated with Edward Boyse, PhD, a famed researcher at Sloan-Kettering, whose initial research team included Broxmeyer.

When Broxmeyer came to Indiana University School of Medicine in 1983, he’d already taken preliminary steps in the work that would define his career. However, the concept was still in its infancy.

Soon, he and his collaborators would show that cord blood yielded as many stem cells as the red marrow deep in our bones. Most in the field dismissed the idea. And to assuage the skeptics, Broxmeyer would have to show that it could help patients.

The team found one in North Carolina: Matthew Farrow.

Diagnosed with Fanconi anemia, the boy faced a grim outlook. Typically, the rare genetic disorder requires a bone marrow transplant from a sibling. Farrow’s older sister wasn’t a match. But, like many parents of children with the disorder, his parents conceived a third child in 1987 as a potential donor.

Seven months after the child’s birth, the Farrow family jetted to Paris. There, Eliane Gluckman, MD, PhD, oversaw the procedure with Broxmeyer explaining how to thaw blood frozen to preserve hematopoietic stem cells.

“My family traveled to France not knowing if they would bring me back alive,” Farrow told attendees at Broxmeyer’s memorial via Zoom.

“The very idea of using medical waste and putting it into a dying child sounds like science fiction,” Farrow said. “But it worked. I may have been the first, but there are thousands of people who owe their lives to the science Dr. Broxmeyer came up with.”

BROXMEYER SPENT the next three decades using science to advance the treatment he helped discover—and he eagerly shared the work, and the credit, with those in his lab.

Charlie Mantel, a longtime staffer and protein chemist in Broxmeyer’s lab, wondered if precious cells were being lost by exposure to the air. To prevent it from happening, he pitched Broxmeyer on an idea: collect cells in low oxygen.

Using PVC pipe, plastic lining, and hoses, Mantel jerry-rigged a hypoxic chamber that he and a post-doc used for the first experiments. By 2015, they reported tripling the number of harvested cells—a finding published in Cell. The first author? Mantel.

The episode revealed much about the culture in Broxmeyer’s lab.

“If you were the driver of the work, you got the credit,” said Megan Capitano, PhD, an assistant professor of microbiology & immunology and a former fellow in the lab. “Hal was probably the most honest person I ever worked with about making sure credit is given where it is earned.”

The communal spirit carried over to sharing resources. Broxmeyer enjoyed years of robust grant support but viewed it as a pool for everyone. “He used that for the betterment and for the growth and success of everybody he touched,” said Scott Cooper, who was Broxmeyer’s second hire at IU and spent most of the last four decades as the lab’s de facto manager.

In evaluating staff and fellows, Broxmeyer valued independence. Not that he was looking for loners, but people with bold ideas and ingenuity to push an experiment to the point where collaboration became a necessity. “They open the data up,” he once said. “But all of us learn from each other. Those perspectives make for a beautiful story.”

Broxmeyer also brought a paternal feeling to his lab.

After a lecture at Roswell Park Cancer Center, Broxmeyer talked with Capitano about her doctoral project. After just 15 minutes, he offered her a job. Despite the offer, Capitano remained painfully anxious ahead of her visit to Indianapolis. Broxmeyer sought to alleviate her concerns. “He did the most amazing thing,” Capitano said. “He called up my mentor before my visit to ask what he could do to make me more comfortable.”

Often, his staff would find Broxmeyer hunched forward, peering into a battered microscope, counting small clusters of cells, picking up a No. 2 pencil, and scribbling the tally in a column on lined paper. Many veteran researchers delegate such mundane work. Not Broxmeyer. He deemed it vital. “I’m the first one to see the data,” he once said. “And I’m already thinking about what we need to do next.”

On trips to conferences, Broxmeyer packed reams of data into his briefcase, punching digits into a calculator on airplanes. There were no shortcuts. Time was always of the essence.

Broxmeyer never missed the lectures of visiting researchers. And yet he also knew the right moment to step out quietly. There was always work to do, plates to score, papers to edit (with margins to fill with notes), and grants to review, ensuring the best ideas received vital funding.

“There was too much to learn,” said Pat Loehrer, MD, a Distinguished Professor and former director of the IU Melvin and Bren Simon Comprehensive Cancer Center, who came to IU the same year as Broxmeyer. “He knew there were people out there who needed that knowledge and needed it that minute.”

From his days as a college athlete, Broxmeyer kept a javelin and a shot put stashed in garage. But it was his interest in weightlifting, which germinated from his cross-training efforts, that offered Broxmeyer a way to test himself. He won a national title in the master’s division for his age and weight class—twice.

Those in medicine often carry secret identities, Loehrer said. “For Hal, it was rippling muscles underneath his shirt,” he said. Even as his health waned, Broxmeyer’s productivity never lagged. In the last five years, the lab he launched in 1983 cranked out 68 peer-reviewed papers, including those in Cell, Nature, and Nature Medicine.

And, despite spending 40 years in the Midwest, Broxmeyer retained his Brooklyn accent to the end. After cancer invaded his vocal cords and surgery left him with a prosthesis, it was diminished—but only in volume. The legendary researcher is survived by his wife, Beth, two sons, and two grandchildren.

The impact of his work continues.