The life and legacy of alumnus Joseph Walther, MD’36 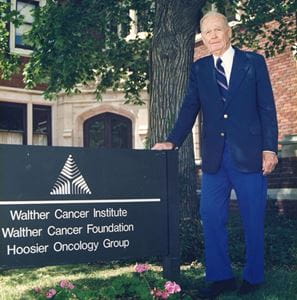 Dr. Joseph E. Walther was instantly smitten when he reconnected with his childhood friend, Mary Margaret Ruddell, after returning from his harrowing service in World War II. He was struck not just by her stunning red hair and flawless complexion, but by her inner beauty.

“It has been said that there are as many angels on earth as there are in heaven,” Dr. Walther, a 1936 graduate of Indiana University School of Medicine, war hero and entrepreneur, wrote in his autobiography, A Life Like None Other: A Maverick Hoosier Physician’s Life and Times. “She definitely was one of them.”

Dr. Walther proposed almost immediately, and they were married 10 days later, on July 11, 1945. Their love story spanned 38 years, 17 hours and six children, until colon cancer took her away. In the final days of her life, Mary Margaret withstood excruciating pain. Dr. Walther would never forget how the disease tormented his wife and their family. He pledged to do all he could to eliminate cancer as a cause of death and suffering.

Thirty five years later—and more than 12 years after his own death—Dr. Walther is still making good on that promise. In 1985, he sold Winona Memorial Hospital, the Indianapolis hospital he founded and named for his mother, and used the nearly $40 million in proceeds to establish the Walther Cancer Institute, which later merged with the Walther Cancer Foundation. In the years since, the organizations have invested more than $150 million in cancer-focused research. Indiana University has been one of the biggest beneficiaries.

The latest chapter in this partnership is the establishment of the Walther Supportive Oncology Program. Made possible by a $14 million commitment to IU School of Medicine, the program will look beyond standard therapies such as surgery, chemotherapy and radiation and develop approaches to care that consider a patient’s overall physical, mental and spiritual well-being.
“I define supportive oncology as meeting the full needs of a person who has cancer,” said Thomas W. Grein, president and chief executive officer of Walther Cancer Foundation. “Each patient is different, and the therapy is going to be different based on the kind of cancer that person has, but the needs of that person are going to be different, too. They could be psychological, they could be emotional, they could be basic coping mechanisms to get through daily life.”

“In the future, I hope we don’t just look at a patient and think we are treating a tumor, but rather supporting a person, so that we broaden the care we’re providing,” he added. “I also hope that once we have built this model, it can be replicated from institution to institution around the nation and perhaps around the globe.”

In his memoir, Dr. Walther acknowledged that he would likely not be alive when his mission of ending suffering from cancer was realized. “[B]ut at least it can be said that I had a part to play,” he wrote. A big part, in fact, and it continues to this day in honor of his beloved Mary Margaret.