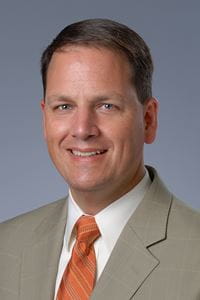 The Department of Surgery at Indiana University School of Medicine recently announced that Alan Ladd, MD, MBA, has been named the new Chief of Pediatric Surgery at Riley Hospital for Children. He is the third chief in the division’s history following 33 years of leadership from Jay Grosfeld, MD, and the leadership of Frederick Rescorla, MD over the last 15 years.

Dr. Ladd completed his undergraduate degree, medical school, general surgery residency, and pediatric surgery fellowship all at Indiana University and the IU School of Medicine.  He joined the faculty in 2002 and rose to the rank of professor in 2016. This month, he will complete his MBA at the Kelley School of Business. He served the Department of Surgery as Clerkship Director from 2008 to 2015 and has directed the pediatric surgery fellowship since 2014. He has provided service to the school as chair of the curriculum council steering committee since 2011 and president of the School’s faculty steering committee in 2016-17. Dr. Ladd has an established national reputation, particularly in surgical education, as a leader in the training of new clerkship directors in the Association of Surgical Education and as a major contributor to the Milestone Project for pediatric surgery fellow training in the American Pediatric Surgical Association.

Dr. Ladd began his new role on June 1. We sat down with him to discuss his vision for the pediatric surgery division.

How do you feel being named the new chief of pediatric surgery?

I'm very excited to take on the responsibility of chief of the division of pediatric surgery. I realized that I’m stepping into very large footprints of those who came before me. One of my mentors said to me that we stand on the shoulders of giants who came before us. I feel that this is true when speaking of following in the footsteps of Dr. Grosfeld and Dr. Rescorla.

Now that you are going from a faculty position to leadership how is that different?

The division’s chief leads the academic mission for the division of the pediatric surgeons here at IU School of Medicine which include education, research and service.  My work would be to devise the vision within each one of those pillars and help steer a pathway toward the future for our division. I would help define the strategy for growth and expansion, and service line development, for our division. The aspects of education are usually self-apparent, but it's maintaining our division work through Riley hospital as leaders in surgical education at the student, resident and fellow levels.

Were you actively pursuing this position?

My pursuit of this position was somewhat intentional and somewhat by chance based on timelines that we don't necessarily have control over. These opportunities don’t come up very frequently, especially internally when you're talking about one division. Keeping this in mind, I've tried to lay a groundwork in my personal and professional development so eventually my skills would translate to a position of leadership. My work in the realms of educational leadership led me toward this position as well as my professional development through the business of medicine MBA program at the Kelly School of Business.

Specifically, short term I will focus on re-energizing our surgical mission due to the recent pandemic. Some of the work also will be acutely focused on service work and trying to adapt to the new norm with regards to surgical care. We will also focus on taking care of the children in Indiana that need surgical care, who have been waiting for it. Most of my energy would be focused toward accomplishing those immediate goals. I think the longer-term goals will be growth of outpatient care to the periphery of Indiana and to develop a platform where any child in the state could receive pediatric surgery care through Riley, no matter where they reside in Indiana. Because of the remoteness of the state that's going to take some novel efforts.

This position was a goal that I truly worked hard for and it panned-out for me. I am honored to be entrusted with this leadership opportunity I feel privileged to have reached this goal and look forward to the challenges and opportunities that come.
The views expressed in this content represent the perspective and opinions of the author and may or may not represent the position of Indiana University School of Medicine.