Healing herself, others through medicine 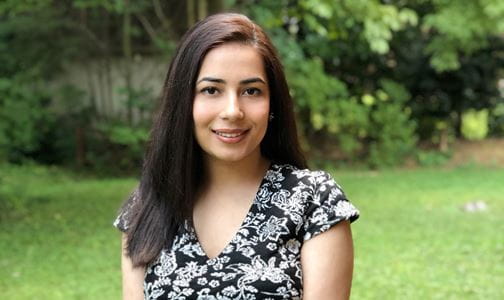 Rhea Sharma be be starting her first year of medical school at the IU School of Medicine — Fort Wayne campus.

Life for Rhea Sharma began in a refugee camp.

A world away from Indiana in every sense of the word, the Nepalese refugee camp that served as Sharma’s birthplace would seem an inauspicious starting point for a future physician. However for Sharma, soon to be a first year medical student at Indiana University School of Medicine—Fort Wayne campus, her improbable origin story has provided a foundation of drive and determination.

“I feel like I have always had these inspirations in my life that were leading me to a career in medicine. In Nepal, I witnessed suffering inside and outside of the camps. I could see firsthand the effects of the lack of medicine, and of proper treatment for patients,” Sharma said. “Once in the United States, I knew what it felt like to be an outsider, trying to figure out my identity. All of that made me see how important it was for me to help others.”

Sharma was born in 1995 in Nepal, located in southeast Asia. Her father a freedom fighter and human rights activist, Sharma’s parents would become Bhutanese refugees following an ethnic cleansing carried out by the country’s government. Sharma was born inside a refugee camp, but soon moved to outside the camp with her family—her father’s status as a wanted political enemy in his home country making it unsafe for them to live in the settlement.

“The conditions in the camps weren’t the best, but in some ways living outside the camps was even worse. Our water and food had to come from the camps, and going back and forth was dangerous,” Sharma said. “Living outside the camp also meant joining a school was extremely difficult. We were outsiders among our own ethnic people, paperless and without an identity.”

In 2002, Sharma’s father was granted asylum to live in the United States. Four years later, the rest of the family, including Sharma, her mother and her brother, were able to join him in Atlanta, Georgia. For the 9-year-old Sharma, the move was a seismic shift. Now equipped with all of the advantages that come with life in the United States, Sharma said shaking off her struggles with identity proved challenging.

“Moving here was very difficult, but also very exciting. I was very eager to start school. I was in the sixth grade, and didn’t speak any English. I had this desire to learn, but in the beginning I was just trying to learn the language,” said Sharma, who managed to quickly learn English within just a few months. “We were going to school in an affluent area, and were bullied a lot by our classmates. There were cultural barriers and language barriers that we had to overcome.”

Despite the setbacks and struggles however, the sudden exposure to American classrooms awakened in Sharma an insatiable appetite for learning. Ever aware of the opportunities she was suddenly afforded—an educational windfall she scarcely could have conceived of back in Nepal—Sharma said she felt compelled to make good on that newfound access to learning.

“At times it was very difficult. But every day was a new opportunity, a day better than yesterday—an opportunity to learn and adapt,” Sharma said. “I’ve lived in this positivity and found great individuals, mentors and teachers along the way who have been supportive of my education.”

After high school, Sharma attended Berea College in Kentucky, majoring in chemistry and minoring in biology. In order to hone her skills, practice taking standardized tests in a medical school environment and prepare herself for the dedication it takes to begin medical school, Sharma opted to explore the medical professions through the Master of Science in Medicine program at IU School of Medicine. What may have started as an unwanted detour for Sharma became a pivotal year in the young learner’s life. Moving to Indianapolis, she found a family physician—IU School of Medicine alum and assistant professor of clinical family medicine Kurt Patterson—who has made a lasting impression on Sharma.

“When I moved to Indianapolis and found a new family physician, it was an eye-opening experience for me. He was able to discover that I had been misdiagnosed for two different things. (But more than that), I was impressed with the fact that every time I went to him, it was always more than just a 30 minute session,” Sharma said. “I found humbleness, care and friendship (from Dr. Patterson), despite our gender, race, and socioeconomic differences. He addressed my problems in a manner no other physician had been able to, for one simple reason—he took the time to listen, to care.”

After a year in the MSMS program, Sharma was accepted into IU School of Medicine, and will be pursuing her degree at the campus in Fort Wayne. Far from decided on what specialty she wants to pursue, Sharma asserted that when she steps into her white coat during the annual White Coat ceremony on Friday, August 2, she has a clear vision of the type of physician she intends to become.

“Something that (Executive Associate Dean for Educational Affairs and Institutional Improvement) Paul Wallach said when he spoke to us during MSMS orientation really helped me understand the reason I want to pursue a career in medicine. He stated, simply, the goal is to ‘relieve suffering.’ I have kept his words with me,” Sharma said.

“I couldn’t be more thankful to be here today. To share my story and how much this institution and the country means to me. Both are places that have given me an identity, and accepted me wholeheartedly. I’ve witnessed IU’s core values in action, and they have helped to guide me.”