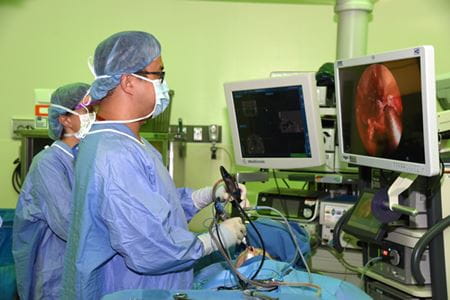 Growing up with parents as physicians, Jonathan Y. Ting, MD, MS, MBA, felt science and medicine in his blood.

He watched how his mom, a pediatrician, and dad, an OB-GYN physician, experienced fulfillment from their work in the field; they strived to make a difference in the lives of their patients, Ting said, an aspect of the job that drew him into studying medicine.

Now months into his new role as chair of the Indiana University School of Medicine Department of Otolaryngology—Head and Neck Surgery, Ting said he’s not only grateful for an already rewarding career, but the opportunity to serve colleagues that share the same passion for excellence.

The past year has been one of transition and growth for the department, with the addition of five new faculty members. As the department keeps evolving, Ting said the collegiality among faculty, staff and residents hasn’t skipped a beat.

“What we’re trying to encourage as we grow is to maintain that sense of engagement as a whole,” Ting said, “where we’re really all a part of the same team; we’re all trying to row in the same direction.”

Ting earned a medical degree from the University of Western Ontario in 2004. Years before he studied in Canada, Ting, born in Singapore, lived in Malaysia and New Zealand.

As a world traveler, why Indiana?

When Ting visited the Department of Otolaryngology as a medical student, Ting said he was initially impressed with the tone and culture set by Richard T. Miyamoto, department chair from 1987 to 2014 and current professor emeritus.

Ting spent two years in Miyamoto’s lab—the DeVault Otologic Research Laboratory—as a postdoctoral research fellow. He worked with Miyamoto, a champion of cochlear implant research, as well as other investigators in the lab on multiple research projects funded by the National Institutes of Health assessing implant outcomes and audiovisual integration and speech perception in children with hearing loss.

Miyamoto, who spent 27 years as chair, said Ting brings both a clinical and research background to the role, adding he’s confident Ting will push the department forward.

“When (Jonathan) came into the department, all the faculty really recognized him as being someone special,” Miyamoto said. “They saw that he could turn into an outstanding physician-scientist in our field.”

While at IU, Ting completed a two-year research fellowship and a five-year residency in the department of otolaryngology; he also earned a master’s degree in clinical research. After spending a year in fellowship training at Harvard Medical School/Massachusetts Eye and Ear Infirmary, Ting came back to Indianapolis, accepting a faculty position in 2012.

Ting, who was the first fellowship-trained rhinologist in the state of Indiana following his time in Boston, said he returned to the Department of Otolaryngology at IU School of Medicine to work with “wonderful mentors and be part of a great team.”

Another major driver was Ting’s wife, Samantha Yeap, MD, MSc, an assistant professor of clinical anesthesia at IU School of Medicine, he said. She had accepted a faculty job in the Department of Anesthesia, and they often flew back and forth between Boston and Indianapolis. They also had celebrated the birth of their first child, a son, in 2010.

Since then, their family has grown as they’ve settled in Indianapolis. Their oldest son, Evan, now 10, is joined by a 6-year-old sister and a 3-year-old brother. Ting also added to his credentials in 2015, earning an MBA in finance from IU Kelly School of Business.

“It’s been a wonderful job,” Ting said, of his experience so far at IU School of Medicine. “I’d love to spend the rest of my career here. I feel like I grew up here as an ear, nose and throat surgeon and I am completely invested in ensuring that our department and faculty thrive over the long term.” 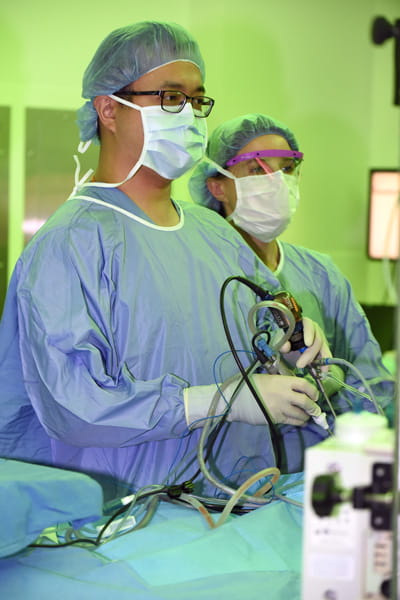 Ting specializes in rhinology, or conditions afflicting the nose and sinuses. His practice includes patients with chronic sinusitis, nasal obstruction, nasal polyps, as well as benign and malignant tumors of the nose, sinuses, skull base and orbit.

“It’s a small area, but there’s a lot of high-priced real estate,” Ting said about his work, adding that many surgeons in the department focus on highly complex procedures and disease states.

Ting’s work in rhinology—similar to other otolaryngology subspecialties—allows for multidisciplinary approaches to care. Shortly after Ting returned to IU School of Medicine, he established a collaboration with the Department of Neurological Surgery for endoscopic pituitary and skull base surgery.

Neurosurgery faculty member Mitesh V. Shah, MD, said Ting’s “encouragement and persistence” in creating the partnership between the two departments has resulted in neurosurgeons participating in more than 100 endoscopic skull base surgeries a year—a significant shift from before.

“We now have the tools and techniques to provide a minimally invasive approach to tumors that previously required extensive radical exposures to eradicate in the skull base,” said Shah, who is the Paul B. Nelson Professor of Neurological Surgery at IU School of Medicine. Ting said he strives to work across disciplines to “build something more than yourself.”

“As a whole, you get a lot further working collaboratively,” he said. “It’s amazing what you can achieve if you’re not worried about who ultimately takes the credit.”

The same can be said for research, as faculty and residents collaborate on studies. Ting said he wants to bring together teams to support the advancement of science not only within the department, but from across IU School of Medicine and other universities.

Ting has also directed the IU School of Medicine Anatomy and Histopathology of the Head, Neck and Temporal Bone Course since 2014, the longest-running postgraduate course in the United States; this July marks its 105th year. It draws residents nationwide.

As the Department of Otolaryngology continues to expand—they are currently recruiting faculty in multiple subspecialties —Ting said he aims to increase the diversity of the department, whether that’s based on geography, skill set, race or gender.

“When we have a really diverse team that feels comfortable bringing their best ideas to work and raising any concerns that they have, this creates an atmosphere where there’s a high level of trust and psychological safety,” Ting said, “Ultimately, I believe that this allows us to achieve our long-term goals.”

Through a high level of engagement among faculty and staff, Ting hopes to help facilitate the advancement of the department’s clinical, education and research programs.

Ting said he hopes that the faculty physicians and advanced practice providers that are part of the department will continue to build their reputations as the provider of choice within the state and regionally for complex otolaryngologic care, while also delivering access to care for referring providers and patients in a timely manner in the locations most convenient to them.

Over the next five years, Ting has a goal to expand the department’s residency program and implement fellowships in each of the subspecialty areas; the department already has two fellowships—head and neck and facial plastic and reconstructive surgery—and will start one in rhinology in July. In research, Ting hopes to move up into the top 10 of NIH funding for otolaryngology departments in the country; they ranked 16th in 2019.

“What I would like to see is, hopefully in a decade, that Indiana is nationally recognized as a destination center for complex care and top tier training program with depth and breadth across all subspecialty areas,” Ting said, “and I believe that we can do that in a way that we’re prioritizing science and diversity in our workforce and our trainees.”