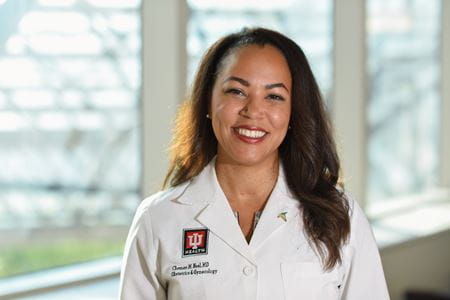 Since early 2020, IU School of Medicine has been working to accelerate its DEIJ initiatives. These efforts included expanding on its core values through a revision of its Honor Code, articulating the school’s goal to be an anti-racist, equitable, welcoming and inclusive organization.

With its announcement of Neal as the first executive associate dean for diversity, equity, inclusion and justice, IU School of Medicine builds on its goal to become a national exemplar for DEIJ. Neal will report directly to IU School of Medicine Dean and Executive Vice President for University Clinical Affairs Jay L. Hess, MD, PhD, MHSA, and will work closely with academic, research and clinical leaders across the organization to advance DEIJ strategic priorities for students, trainees, faculty and staff. As a member of the dean’s senior executive team, Neal will serve as an institutional thought leader, contributing across mission areas.

“At IU School of Medicine, diversity is one of our core values. Finding a transformative leader to serve as our first executive associate dean for diversity, equity, inclusion and justice was critical to our success as an organization moving forward,” said Hess. “Dr. Neal’s longstanding success here at IU School of Medicine as a clinician, educator, mentor and diversity champion will position the school well as we strive for inclusive excellence.”

According to Neal, this new DEIJ leadership role is an opportunity for her to continue her mission of helping others reach their full potential, while solving some the school’s most complex challenges through collaboration.

“Excellence in diversity, equity, inclusion, and justice elevates all members of our medical school community. As the largest medical school in the country, we have a responsibility to be leaders in health equity and inclusive excellence. To do that, DEIJ must be woven into all aspects of what we do—research, education, patient care, faculty and staff affairs, and community engagement,” said Neal, who will focus on strategically aligning work in each of those areas in her new role. “We have a lot of great work happening at IU School of Medicine and are already leaders in some areas. I would like to continue that great work and create alignment within our current efforts.”

Among Neal’s early goals in the role are establishing metrics to help school leadership gain a greater understanding of key areas like retention and belonging, as well as a focus on the diversification of faculty.

“That is a big priority because of the direct relationship to health equity outcomes and organizational success,” said Neal. “Meeting this priority will take a multifaceted approach that involves all aspects of our mission from culture to climate to research and education. After we understand where we are then we can make strategic plans for moving forward over the next several years.”

She will officially begin in her new role on February 1. In the position, she will lead an existing team of faculty and staff and have direct responsibility for a variety of areas, including: