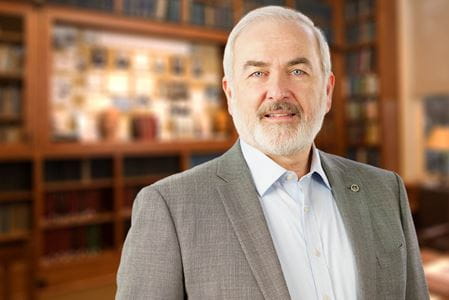 INDIANAPOLIS—Adrian Krainer, PhD is this year’s winner of the August M. Watanabe Prize in Translational Research and will be honored at the 2022 Indiana Clinical and Translational Sciences (CTSI) Annual Meeting on Friday, September 16. Krainer is currently the St. Giles Foundation Professor at Cold Spring Harbor Laboratory in New York.

Krainer’s research focuses on RNA splicing, which includes studying how RNA can be altered in ways that lead to cancer or disease, as well as how researchers can edit those defects through tailored therapy. His lab has studied RNA splicing specifically in spinal muscular atrophy (SMA), a hereditary disease that destroys nerve cells in the brain stem and spinal cord that control motor skills. Krainer’s research led to the development of nusinersen (Spinraza™), which was approved by the U.S. Food and Drug Administration in 2016 as the first drug to treat children and adults with SMA.

“I am very honored and grateful to be selected for the August M. Watanabe Prize in Translational Research, and I feel humbled by the remarkable scientific accomplishments of the seven prior recipients,” said Krainer, who is also the Cancer Center Deputy Director of Research at Cold Spring Harbor Laboratory. “I look forward to sharing our results on RNA-targeted therapeutics at the annual meeting of the Indiana Clinical and Translational Sciences Institute in the fall, and to stimulating discussions with clinicians and researchers from across the state of Indiana.”

Krainer has received various other honors and awards, including the Inventor of the Year award from the New York Intellectual Property Law Association (2017), RNA Society Lifetime Achievement Award (2019), election to the National Academy of Medicine (2019), and Takeda Pharmaceuticals & NY Academy of Sciences Innovators in Science Senior Scientist Award in Rare Diseases (2020).

“For so many years, physicians like myself have had to sit with emotionally stunned parents whose infant has just been diagnosed with an untreatable disorder that is going to take their child’s life,” said Darryl De Vivo, MD, Sidney Carter Professor of Neurology at Columbia University Medical Center, who was also involved with the clinical trials for nusinersen. “To see how these children respond to Spinraza is truly miraculous. But in this case, the ‘miracle’ is based on the research, scientific insights and dedication of Krainer and those whose work he has guided.”

“He is an outstanding scientist of the highest integrity and talent,” said Roberts, who is the chief scientific officer at New England Biolabs. “As an experimentalist during his formative years he was among the best I have ever come across. He had very high standards for his work and this has been instilled in his students and colleagues. I am very proud to call him an alumnus of my laboratory.”

According to the National Organization for Rare Disorders, spinal muscular atrophy (SMA) occurs in approximately one in 10,000 live births. Indiana is one of 39 states in the U.S. where babies are screened for the disease. Spinraza is currently being used to treat more than 12,000 patients with SMA in over 50 countries.

As winner of the Watanabe Prize, Krainer will be the featured speaker at the 2022 Indiana CTSI Annual Meeting, which will be focused on rare diseases.

The Watanabe Prize is one of the nation’s largest and most prestigious awards recognizing individuals focused on shepherding scientific discoveries into new therapies for patients. It is named in honor of the late August Watanabe, a titan in the field of translational research in both academia and industry who impacted the health of people around the world as a leader at Indiana University School of Medicine and Eli Lilly and Company.

Watanabe began his career at IU in 1972 and served as chair of the Department of Medicine from 1983 to 1990. From there, he joined Eli Lilly and Company, where he was ultimately named executive vice president, overseeing the launch of 11 drugs and doubling the size of Lilly’s research and development organization.

About the Indiana Clinical and Translational Sciences Institute
The Indiana Clinical and Translational Sciences Institute (CTSI) brings together the state’s brightest minds to solve Indiana’s most pressing health challenges through research. It is a statewide partnership among Indiana University, Purdue University, the University of Notre Dame and the Regenstrief Institute collaborating with numerous life sciences businesses, government entities, and community organizations. The Indiana CTSI engages with the public at every level of research—from basic science to patient care. It has been continuously funded by multimillion-dollar grants from the National Institutes of Health since the Indiana CTSI’s founding in 2008 and is housed at the Indiana University School of Medicine. For more information, visit indianactsi.org.

About Indiana University School of Medicine
IU School of Medicine is the largest medical school in the United States and is annually ranked among the top medical schools in the nation by U.S. News & World Report. The school offers high-quality medical education, access to leading medical research and rich campus life in nine Indiana cities, including rural and urban locations consistently recognized for livability.