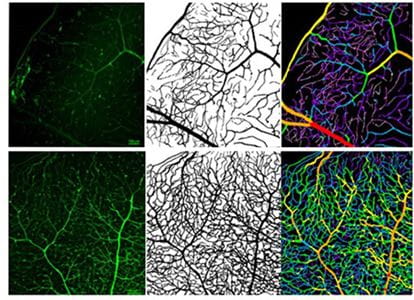 This comparative graphic illustrates vascular density assessment in retinas injected with saline on top and N-KNA+ cells below.

INDIANAPOLIS—Researchers at Indiana University School of Medicine, in collaboration with the University of Alabama at Birmingham and five other institutions, are investigating novel regenerative medicine approaches to better manage vascular health complications from type 2 diabetes that could someday support blood vessel repair in the eye among diabetic patients with early retinal vascular dysfunction. These research strategies include identifying and using new methods to differentiate or mature human induced pluripotent stem cells (hiPSCs) into the specific mesoderm subset of cells that display vascular reparative properties.

“Vascular diseases afflict hundreds of millions of people in the world,” said Chang-Hyun Gil, MS, PhD, a postdoctoral fellow in the Department of Surgery and co-first author of the study. “In this study, we focused on the retinal vessel in type 2 diabetes. Our results demonstrate the safe, efficient and robust derivation of hiPSC-derived specific mesoderm subset for use as a novel therapy to rescue ischemic tissues and repair blood vessels in individuals with vascular diseases. The results provide a foundation for an early phase clinical trial.”

“Unlike the use of embryonic stem cells (ESCs), genetically engineered hiPSCs do not carry the ethical challenges ESCs possess that limit their possible usage, and hiPSCs are being increasingly recognized as a viable alternative in study design and application as a cell therapy for human disorders,” Gil said.

According to the U.S. Centers for Disease Control and Prevention, more than 37 million people in the United States have diabetes–more than 11 percent of the U.S. population. What’s more, diabetes-related complications have risen among both young adults ages 18 to 44 years of age and adults ages 45 to 64. These complications cause major metabolic disturbances that damage the cardiovascular, visual, peripheral nerve and renal systems through harming small and large microvessels that feed these tissues. In 2019, more than 11 percent of adults ages 18 and older reported severe vision issues or blindness and more than 1.87 million adults were diagnosed with major cardiovascular disease.

“This work by Dr. Gil represents a monumental step forward in the application of induced pluripotent stem cells in treating the complications of diabetes,” said Michael P. Murphy, MD, the Cryptic Medical Research Foundation Professor of Vascular Biology Research at IU School of Medicine, a vascular surgeon at IU Health and Eskenazi Health and a coauthor of the study.

Researchers converted hiPSC into a specific mesoderm subset that was enriched to generate endothelial cells with vessel reparative properties similar to endothelial colony forming cells (ECFC). Endothelial cells are cells found in the inner lining of blood vessels, lymph vessels and the heart and are a major component in regulating vascular function and inflammatory reactions. Endothelial cells control blood flow and regulate the transfer of proteins from blood into tissues.

“The next translational step of the work is to transfer the research protocols reported for differentiation of the hiPSC into to S-KNA+ cells into large scale manufacturing processes,” said Mervin C. Yoder, MD, distinguished professor emeritus and research advisor for the Indiana Center for Regenerative Medicine and Engineering. Yoder is another coauthor of the study and is the scientific founder of Vascugen, a company driven to advance treatments for life-threatening conditions caused by microvascular conditions. “Selected aspects of this work have been licensed by Vascugen, Inc., through the Indiana University Innovation and Commercialization Office, who are focused on developing vascular reparative cells from induced pluripotent stem cells.” 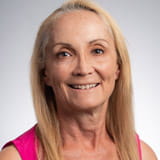 Another study coauthor is Maria B. Grant, MD, the former Marilyn Glick Professor of Ophthalmology at the IU School of Medicine Eugene and Marilyn Glick Eye Institute and current endowed chair of ophthalmology at UAB. Grant said this is a highly translational study that is a continuation of a grant she and Yoder have been working on for the last 20 years regarding stems cells and how they can be used to repair blood vessels in the eye. While hiPSCs can take a long time to grow, the study team simplified the process to shorten the time to grow them and make them more feasible to translate into a human therapy to repair blood vessels in the eye.

“I want to express my greatest thanks to Dr. Yoder, Dr. Grant and Dr. Murphy for their support,” Gil said. He will remember Yoder for “his dedication, passion, patience and kindness” and Murphy for supporting him in completing the study.