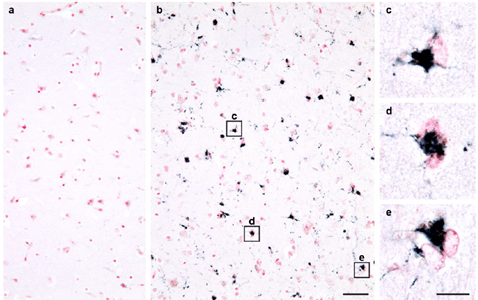 INDIANAPOLIS—Experts at Indiana University School of Medicine have helped identify that a common protein found in neurodegenerative diseases forms amyloid filaments in an age-dependent manner without a connection to disease.

Many age-dependent neurodegenerative diseases, like Alzheimer’s and Parkinson’s, are characterized by amyloid abundance, or plaque. In a new paper published in Nature, researchers from the MRC Laboratory of Molecular Biology in Cambridge, England, United Kingdom and colleagues around the world, including several IU School of Medicine experts, used electron cryo-microscopy structure determination to discover that lysosomal type II transmembrane protein, TMEM106B, also forms amyloid filaments in human brains but, uniquely, it forms in an age-dependent manner and might not be connected to a type of disease.

“Until now, the presence of abundant intraneuronal amyloid filaments in human tissues has always been associated with disease,” said Bernardino Ghetti, MD, a distinguished professor and professor of pathology and laboratory medicine at IU School of Medicine. “While TMEM106B has been associated with frontotemporal dementias and other diseases, the evidence for a causal relationship between TMEM106B aggregation and disease now remains unclear.”

Researchers studied 22 individuals with abundant amyloid deposits, including sporadic and inherited Alzheimer’s, as well as the frontal cortex of three neurologically normal individuals. They also studied three TMEM106B folds, with no clear relationships between folds and diseases. The TMEM106B filaments discovered in the brains of older, but not younger, neurologically normal individuals suggests that these proteins form in an age-dependent manner and that there was no clear relationship between protein folds and neurodegenerative diseases. Previously, TMEM106B has been identified as a risk factor for frontotemporal lobar degeneration, but this research opens the dialogue as the protein may no longer be associated with the cause of a disease.

“This insight encourages us to further assess the role of filament formation, like TMEM106B, in relation to human aging and other pathologies, as well as if they’re found outside the nervous system,” Ghetti said.