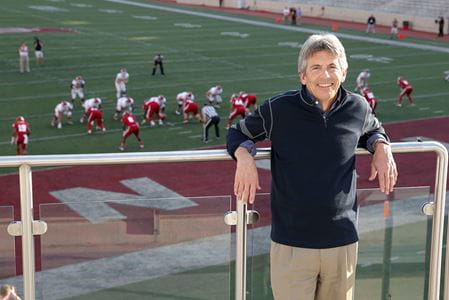 INDIANAPOLIS—The world’s most comprehensive concussion study is being expanded with a boost of nearly $42.65 million in new funding, aimed at following athletes for a decade after injury—examining the impacts of head injuries after graduation.

Indiana University School of Medicine serves as the administrative and operations core for the study, and is the central coordination center for the CARE Consortium. Led by Thomas W. McAllister, MD, a professor of psychiatry with IU School of Medicine, the IU team provides regulatory and fiduciary oversight, as well as biostatistics and data management, neuroimaging, bioinformatics, biomarkers/biospecimen management, and other support resources for the group.

“This new phase of funding will allow for us to even further expand on the study’s original goals, enabling us to follow athletes after they’ve moved on from their collegiate and service academy careers to see how concussion and repetitive head impacts affect them later in life,” said McAllister. “This research will not only help to inform our understanding and treatment of traumatic brain injury, but also provide valuable information for youth sports participants and their families.”

The CARE Consortium was created through the NCAA-Department of Defense Grant Alliance in 2014. This next phase of CARE, known as CARE/Service Academy Longitudinal mTBI Outcomes Study (SALTOS) Integrated (CSI) Study, will investigate the nature and causes of long-term effects of head impact exposure (HIE) and concussion/mild traumatic brain injury in NCAA student-athletes and military service members.

The new funding allows for investigators to build on existing research by following former CARE research participants beyond graduation to evaluate the long-term or late effects of traumatic brain injuries for up to 10 years or more after initial exposure or injury.

The most comprehensive, prospective study of its kind to better understand concussion, head impact exposure and effects on brain health, the CARE Consortium has broad goals to enhance the health and safety of NCAA student-athletes and military service members. It also is the first major concussion study to assess both women and men in 24 sports—previously, most concussion literature came from men’s football and men’s ice hockey.

The latest awards bring the Grand Alliance funding now to more than $105 million.

The initial phase of CARE focused on the six-month natural history and neurobiology of acute concussion and HIE. The second phase, CARE 2.0, prospectively investigated the intermediate effects—such as changes in brain health outcomes over a college career—and early persistent health effects associated with HIE and concussion soon after graduation.

Anticipated outcomes from the study include determining the prevalence and characteristics of long-term brain health problems associated with HIE and concussion and mild traumatic brain injury. The study also seeks to validate advanced biomarkers (such as neuroimaging, and blood) that detect early indicators of such long-term health issues.

“Identifying the neurobiological pathways that possibly contribute to long-term negative consequences of concussion and repetitive head impacts is critical for the development of early interventions and strategies in athletes and service academies who are at risk,” said NCAA Chief Medical Officer Brian Hainline, MD. “We are confident this award from MTEC, coupled with additional funding from the NCAA and DoD, will provide us the support to develop an array of interventions that mitigate possible long-term effects of concussion or HIE.”

About the CARE Consortium
Launched in 2014 as part of the NCAA-DoD Grand Alliance, the CARE Consortium is overseen by principal investigators at research institutions across the country. Leveraging its extensive infrastructure and experienced research team, CARE has published over 80 scientific papers that are critical to advancing the science of mTBI/concussion and HIE. In addition to IU School of Medicine’s leadership: