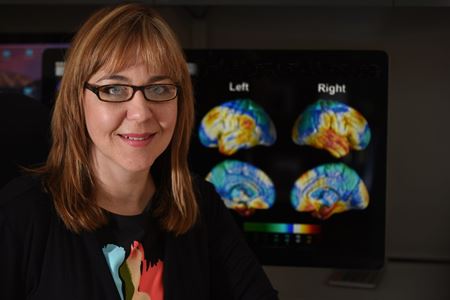 INDIANAPOLIS—When the Food and Drug Administration approved the use of the drug aducanumab to treat Alzheimer’s disease in early June, leaders in neurodegeneration research quickly created an expert panel to issue guidance to physicians on how to best administer the drug.

Indiana University School of Medicine Distinguished Professor Liana Apostolova, MD, the Barbara and Peer Baekgaard Professor in Alzheimer’s Disease Research, joined several other leading Alzheimer’s disease experts from across the United States on the panel. The panel recently published their findings in The Journal of Prevention of Alzheimer’s Disease.

The FDA first approved aducanumab, an amyloid-targeting monoclonal antibody, under the accelerated approval pathway “for the treatment of Alzheimer’s disease.” The agency later added that the drug “should be initiated in patients with mild cognitive impairment or mild dementia stage of the disease, the population in which treatment was initiated in clinical trials.”

This was the first time in nearly 20 years that the FDA approved a drug to treat Alzheimer’s disease.

After the approval, Apostolova said the panel was a necessary next step for the greater Alzheimer’s disease field. The panel generated a consensus of what types of patients are eligible for the drug and how it could be safely administered. The FDA did not outline any eligibility criteria based on age, disease variant or if patients with mixed pathologies of other types of neurodegenerative diseases closely related to Alzheimer’s disease can take the drug.

“It was exceedingly important for our field that key opinion leaders generate the set of eligibility criteria, so our fellow neurologists, geriatric psychiatrists and primary care physicians can practice medicine safely,” Apostolova said.

The panel, led by Jeffrey Cummings, MD, professor at the University of Nevada, Las Vegas School of Integrated Health Sciences, included leaders with varied expertise in Alzheimer’s disease, such as those who oversaw clinical trials of aducanumab, biomarker experts and clinical experts.

At IU School of Medicine, Apostolova is the lead principal investigator of the Longitudinal Early-Onset Alzheimer’s Disease Study (LEADS), the school’s top-funded research program and the largest single National Institutes of Health grant ever received by an IU researcher.

Clinical trials have strict eligibility criteria for participants, Apostolova said. Patients in the aducanumab studies were largely independent, Apostolova said, and had early-stage Alzheimer’s disease with only mild cognitive or functional impairments. The expert panel recommended that the drug should be “restricted to this population in which efficacy and safety had been studied.”

“We really do not know whether a more advanced Alzheimer’s patient would benefit from this drug,” Apostolova said. “These more advanced patients would not be eligible in our opinion for this drug as there is no evidence for efficacy in this population yet. We must practice medicine following the best science. This is the guidance that will protect providers and patients when they administer or receive the drug, respectively.”

The expert panel emphasized the importance of providers engaging in patient-centered decision-making when administering the drug, which includes “comprehensive discussions and clear communication with the patient and care partner regarding the requirements for therapy, the expected outcome of therapy, potential risks and side effects, and the required safety monitoring, as well as uncertainties regarding individual responses and benefits.”

David Clark, MD, associate professor of clinical neurology at IU School of Medicine, put together a protocol for Indiana University Health physicians—following the guidelines of the expert panel—to administer aducanumab in the safest way to the most appropriate patients.

“In keeping with IU Health’s commitment to excellence on behalf of our patients, we intend to offer aducanumab to individuals with mild cognitive impairment or mild dementia when there is biological evidence of Alzheimer disease, and following a detailed discussion of the risks, benefits, costs, and quality of evidence supporting its use,” Clark said.