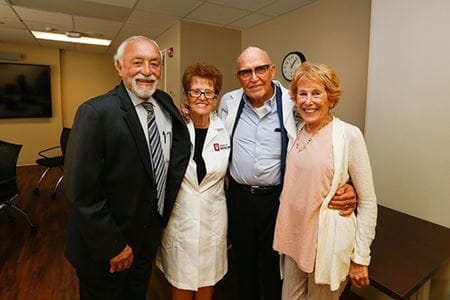 INDIANAPOLIS—Indiana native Wilbert Hamstra and his wife Peggy are making a $1 million gift to support cardiology research at Indiana University School of Medicine. It is a gift that’s been decades in the making, beginning with a frightening incident 30 years ago.

“I was on my boat with some guests in Fort Myers, Florida and I passed out,” said Mr. Hamstra, who was taken to a nearby hospital. “After running tests for two days, they said they couldn’t do anything for me and recommended I go to one of the top cardiac medical hospitals they knew of in the country.”

That hospital was back home in Indiana—at what is now Indiana University Health Methodist Hospital. It was also home to Douglas Zipes, MD, one of Indiana’s most celebrated cardiologists and an IU School of Medicine faculty member.

In other words, Hamstra was in good hands.

“He scheduled some tests and then said he could fix me up, which he did,” Hamstra said. “I never had that same issue again. I had the highest regard for Dr. Zipes from that point going forward, and still do to this day.”

Zipes, a former director of the Division of Cardiology, is now a Distinguished Professor Emeritus at IU School of Medicine.

Hamstra, the son of first-generation Dutch immigrants, is a native of Jasper County, Indiana, where he still lives part of the year. He was raised to believe in hard work and service to the community. He founded and operated Hamstra Builders, a home and commercial construction company that has built structures across the country. Now the Hamstra Group, the company’s success provided Hamstra with the means to say thank you.

“God has blessed me immensely through our business financially, and I wanted to give back,” Hamstra said. “I wanted to find a way to thank all the doctors, surgeons and staff, starting with Dr. Zipes, for the years of excellent care I have received from IU Health. I think they are the best in the world.”

IU has a storied history in cardiology, as pioneers in cardiac imaging and the treatment of heart rhythm disorders. IU Methodist, now part of the IU Health System, is one of Indiana’s largest hospitals and houses a Level 1 trauma center.

With a staff that includes 53 cardiologists, eight PhD investigators, 12 post-doctoral fellows, and 21 cardiovascular disease fellows, the Division of Cardiology at IU is growing rapidly.

Subha V. Raman, MD, chief of cardiology at IU School of Medicine, welcomed the creation of The Wilbert and Peggy Hamstra Cardiology Research Fund. She said it will play a vital role in the division’s future.

“Mr. Hamstra’s inspirational life of building with purpose will help a long line of builders at IU–people who recognize where we can do better for people affected by heart and vascular disease, and who do something about it through their work,” Raman said.

The Hamstras, who have a growing family that includes four children, nine grandchildren, and 22 great-grandchildren, remain active as volunteers in their community and church. And their philanthropy has extended beyond IU—but in keeping with the theme of building.

Wilbert founded a faith-based retirement center in DeMotte, Indiana as a gift to the elderly residents of his hometown, bringing together a coalition of four churches to donate land for the project. The center aims to provide high-quality care in a first-rate facility that now includes units for physical therapy and memory care.