INDIANAPOLIS—A new $11.2 million grant coordinated by the Indiana University School of Medicine from the National Institute on Aging (NIA) will support an international collaboration on multiethnic genomic analysis and advanced brain imaging and other biomarkers for early detection of Alzheimer’s disease.

In the search for causes and novel interventions for Alzheimer’s disease, it became clear that the lack of multiethnic data hampered the understanding of genetic and environmental contributions to AD risk and development of a precision medicine approach for dementia. The partnership of the Korean Brain Aging Study for the Early Diagnosis and Prediction of Alzheimer’s Disease (KBASE), launched at SNU in 2014 by Lee and colleagues and several teams from the NIA-sponsored Alzheimer’s Disease Sequencing Project (ADSP) in the United States, will help to address this gap by contributing and analyzing biomarker and clinical data from over 1,000 Korean participants who have undergone advanced MRI and PET neuroimaging as well as longitudinal follow-up. Data of this type is very rare in Asian populations.

“More diverse genomic data on those at risk for Alzheimer’s disease coupled with richly phenotyped cohorts, multidisciplinary expertise and rapid data sharing will help accelerate the identification of new potential therapeutic targets and their applicability across different populations,” said Saykin, one of the principal investigators. “Large-scale data analysis of KBASE genomes, imaging and other data combined with other multiethnic cohorts will help us better understand what contributes to the risk for dementia in different groups and provide clues as to how we can delay progression.” 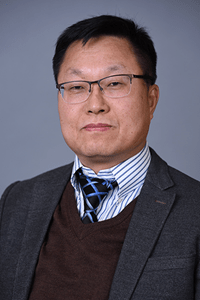 “This is a novel approach to biomarker discovery for Alzheimer’s disease,” said Nho, one of the principal investigators and himself a Korean scientist based at IU School of Medicine. “Through big data analysis techniques integrating genetics and other omics, clinical data and advanced imaging including brain network analysis, this international effort will aid the understanding of clinical and biological differences across ethnoracial groups.”

As Alzheimer’s disease continues to cause irreversible brain damage in individuals around the world, it is increasingly important to detect the disease as early as possible. While the goal of developing disease modifying agents has reached higher than ever, it remains unclear how factors like diet, personality, stress, mental health, sleep, social relationships and more contribute to the disease, although numerous studies have suggested that such factors are related to dementia syndrome or cognitive declines later in life.

The five-year, multi-million-dollar “KBASE2” grant will support the collection of new data for KBASE, which uses a similar design as the Alzheimer’s Disease Neuroimaging Initiative (ADNI) based in the United States. IU School of Medicine will coordinate and provide support to Seoul National University as it collects new longitudinal data. Genomic samples and other data will simultaneously flow back to IU School of Medicine (coordination and analysis), University of Miami (genome sequencing), University of Pennsylvania (genome data harmonization and dissemination) and University of Southern California (imaging informatics) to analyze and disseminate the data.

“KBASE2: Korean Brain Aging Study, Longitudinal Endophenotypes and Systems Biology” is supported by the National Institute on Aging under Award Number U01 AG072177.