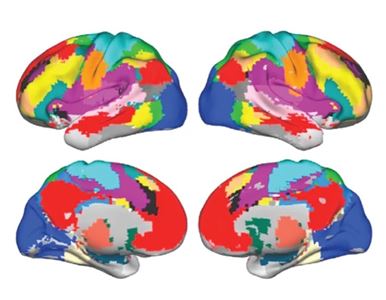 INDIANAPOLIS—As new approaches for Alzheimer’s disease diagnosis and treatment emerge, it’s more important than ever to understand the ties between disease pathology, brain connections and genetics.

A new research synthesis, published in Nature Reviews Neurology, explores the connection between Alzheimer’s disease and connectomics, a rapidly growing area in computational neuroscience that provides a theoretical framework for understanding brain networks. By investigating the relationships between the human connectome, disease pathology and genetics, researchers may discover network-level diagnostic biomarkers that can serve as outcome measures for therapy and prevention designed to preserve brain function.

“Alzheimer’s disease is biologically defined by two principal neuropathological hallmarks: the abnormal accumulation of amyloid beta plaques and tau tangles,” said Meichen Yu, PhD, first author of the review and a postdoctoral appointee in radiology and imaging sciences at Indiana University School of Medicine. “Connectome studies help researchers understand the spreading patterns of amyloid and tau in Alzheimer’s disease and these insights can lead to novel biomarkers.”

The history of connectomics goes back about 15 years to when Olaf Sporns, PhD, co-author and distinguished professor in psychological and brain sciences at IU, and his colleagues defined the concept of the connectome, launching a field that is now being applied to Alzheimer’s.

“Brain network models have been applied to characterize brain disorganization in Alzheimer’s disease, and could be useful for tracking and predicting the progression of the disease,” said Sporns. “Moreover, the concept and computational approaches of connectomics can be generalized to study other neurological and neuropsychiatric disorders.”

The application of new approaches in brain science to Alzheimer’s disease is very timely with the recent accelerated approval in the United States of the first new drug for Alzheimer’s in nearly two decades.

“As we enter a new era of anti-amyloid therapeutics, the connectome may serve as one important readout of therapeutic impact,” said Andrew Saykin, PsyD, co-author and director of the National Institute on Aging-designated Indiana Alzheimer’s Disease Research Center.

“With advances in structural, functional and molecular neuroimaging, we can study the evolution of plaques, tangles and other brain pathology in relation to genetic risk and do this in a minimally invasive manner. Including other omics, biomarkers will help provide a better understanding of the drivers of brain pathology leading to loss of connectivity and ultimately to cognitive decline. A promising line of research is use of connectomics to help identify therapeutic targets to preserve brain connectivity.”

The authors are part of a growing group of researchers at IU that tackle human brain structure, function and disorders by leveraging state-of-the art neuroimaging and network science methodology. Building on years of collaboration in the area of Alzheimer’s disease, the authors chart a path toward the future, by focusing on associations between connectome changes and amyloid beta, as well as tau pathologies in different phenotypes of Alzheimer’s disease. These approaches promise to bridge the gap between Alzheimer’s disease biomarkers and genetic variation. The authors highlight the utility of connectome-derived computational models for replicating and predicting the accumulation and spreading patterns of amyloid beta and tau and discuss current challenges, opportunities and future directions in the review.