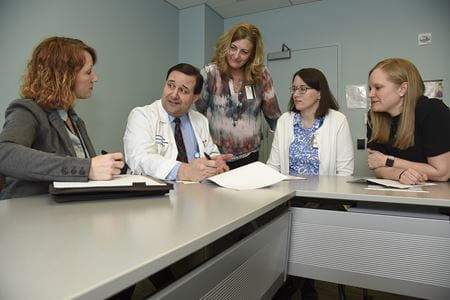 INDIANAPOLIS—Researchers are learning more about ways to predict the likelihood of newborn complications from early in pregnancy using samples provided by the Indiana University School of Medicine Building Blocks of Pregnancy Biobank.

Preterm birth is a common pregnancy complication that can lead to significant neonatal morbidity and mortality. Very preterm birth, which is delivery before 32 weeks gestation, is particularly associated with increased rates of complications in newborns. In a new study published in PLOS ONE, researchers looked at levels of progesterone metabolites as well as the demographic and obstetric history of patients. They found that by looking at the combination of these factors, they could accurately predict how likely a pregnant woman was to deliver very preterm or have a newborn with multiple complications. Pregnancies predicted to be at-risk in the study resulted in newborns spending about seven weeks longer in the neonatal intensive care unit (NICU) than those at lower risk.

“These discoveries about different progesterone metabolites and their roles in prediction and potentially prevention of spontaneous preterm birth are very exciting,” said David Haas, MD, MS, vice chair of research for IU School of Medicine Department of Obstetrics and Gynecology and a co-author of the paper. “While more research is needed, these findings are a significant step in helping physicians provide multidisciplinary, personalized care to improve perinatal outcomes for their patients.”

The study, led by Avinash Patil, MD, used samples from the IU School of Medicine Building Blocks of Pregnancy Biobank. The biobank has been collecting samples from pregnant patients in all trimesters, as well as during labor and delivery, since 2009. Patil is the founder and chief executive officer of Nixxi, a company focused on improving women’s health and pregnancy outcomes. This study is part of a larger project being commercialized through the Indiana University Innovation and Commercialization Office and licensed to Nixxi.

“This research breaks new ground by demonstrating that it is feasible to identify pregnancies likely to result in significant neonatal complications as early as the late first trimester,” Patil said. “A method for predicting neonatal complications this accurately does not currently exist. The practical application of these findings is clear: as value-based health care becomes more prevalent, there will be a need for tools to screen and identify women at risk for poor pregnancy outcomes, particularly those affecting the newborn and increasing the length of NICU stays.”

Read the full paper on the PLOS ONE website.

Learn more about obstetrics and gynecology research at IU School of Medicine.