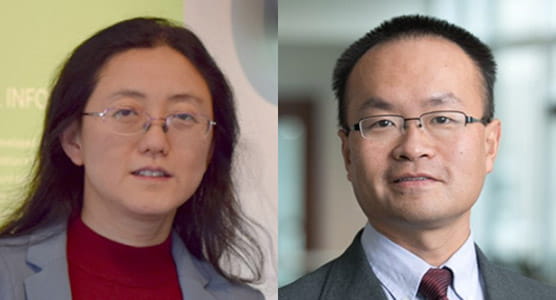 Putting together research for publication can be a challenging and time-consuming process, heightened even further because of the current COVID-19 situation, during which non-essential labs at Indiana University School of Medicine have been hibernated and many researchers are now working separately and remotely, instead of collaborating within the same space. Despite those obstacles, Jie Zhang, PhD, Jun Cheng PhD, and Kun Huang, PhD, had their research published in Nature Communications on April 14, which is an even more significant feat considering one of their leading authors has been quarantined in Wuhan, China for the last two months of their work.

The study that brought about this opportunity for publication was led by Zhang, who is an assistant professor of medical and molecular genetics. It focuses on the application of machine learning and image analysis to help researchers distinguish a rare subtype of kidney cancer (translocational renal cell carcinoma, or tRCC) from other subtypes by examining the features of cells and tissues on a microscopic level. Zhang said the structural similarities have caused a high rate of misdiagnosis. Within this publication, the researchers studied 74 tRCC samples, which constitutes the largest tRCC collection in the world.

“The phenotype of this tRCC looks very much like clear cell renal cell carcinoma, or ccRCC, the most common type of renal cell carcinoma, so it’s kind of difficult for pathologists to distinguish between the two,” said Zhang. “To improve that, we tried to use the machine-learning technique, feeding in the digitized pathological image data to the analysis pipeline to train the computer to extract the features related to tRCC. This will help pathologists confirm the case, instead of just relying on their eyes.” 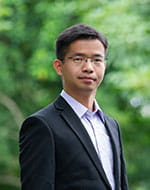 The first author of this paper, Jun Cheng, PhD, started working with Zhang and Huang back in 2016, while he was a visiting PhD student from China. Cheng visited for the first time when Zhang and Huang were researchers at Ohio State University, before they joined IU School of Medicine, and has also visited them since they transitioned to their current roles. Cheng is currently an assistant professor at Shenzhen University and had traveled to his hometown of Wuhan for winter vacation.

“I was planning to stay at home for 10 days,” said Cheng. “Three days later, the whole city of Wuhan was in lockdown (due to concerns of COVID-19) and the lockdown lasted for over two months.”

The city of Wuhan became the epicenter of the pandemic, with more than 50,000 confirmed cases of COVID-19 among the population of 11 million people. As he was working to revise their publication, Cheng could not return to his lab at Shenzhen University, since teachers and students who left for vacation weren’t allowed to go back due to the pandemic. He only had a laptop at his home, but needed a high-performance computer to conduct data analyses.

“Fortunately, one student in my lab didn't go home and stayed in school during winter vacation,” said Cheng. “She helped boot the computer in my lab and then I did all the experiments on it remotely.”

Cheng also needed to repeat some of the analysis for the revision, which required a transfer of previously downloaded public data to China from Huang’s lab in Indiana, and it took a week to complete the data transfer.

“It was quite stressful to revise the publication during the quarantine, but finally we made it,” said Cheng.

Huang described this publication as a true team science effort, involving both internal and international collaborations, both of which he said are essential. Liang Cheng, MD, Virgil Moon Professor of Pathology from IU School of Medicine and one of the corresponding authors in this paper, was able to collect additional tRCC and ccRCC samples within two weeks from a collaborator in Michigan for the additional analysis, which itself was an amazing accomplishment.

“In many cases, we collaborate internationally because there is a huge innovation base that can help with our research,” said Huang, who is also the Director of Data Sciences and Informatics for the IU Precision Health Initiative. “Even in difficult times, as long as we have enough resources and means of communication, we can still carry out collaborative research.”

While cancer has traditionally been characterized by the location of the disease, this research focuses on renal cancer based on the genetic markers instead. This study was supported in part by the IU Precision Health Initiative.

The city of Wuhan was reopened last week.