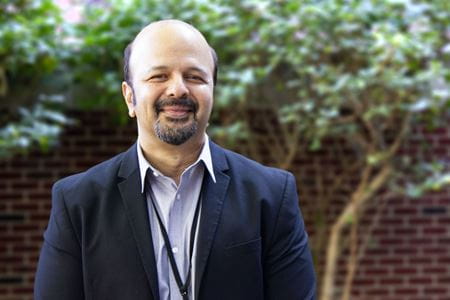 INDIANAPOLIS—Reuben Kapur, PhD, has been appointed interim director of the Herman B Wells Center for Pediatric Research at Indiana University School of Medicine. He succeeds Raghu Mirmira, MD, PhD, who led the center since August 2017. Kapur’s appointment begins November 1, 2019.

“We are grateful to Dr. Mirmira for his exceptional leadership,” said D. Wade Clapp, MD, chair of the Department of Pediatrics. “Our department is now the eighth-ranked pediatrics research program in the country. The Wells Center has played a critical role in helping us attain this elite recognition and, more importantly, has helped speed discoveries that will improve children’s health. Dr. Kapur has played a tremendous role in our success, and he is the ideal person to assume the role of interim director during this period of transition.”

Kapur is the Frieda and Albrecht Kipp Professor of Pediatrics and the leader of the Hematalogic Malignancies and Stem Cell Biology research group at the Wells Center. As a nationally recognized investigator, his research focuses on the mechanisms of childhood leukemias and pediatric bone marrow failure syndromes, with the central goal of developing new therapies to treat these life-threatening illnesses.

Kapur obtained a Bachelor of Science in physics, chemistry and mathematics from Christ Church, India and a Bachelor of Science in microbiology and immunology from Washington State University. He completed a PhD in microbiology and immunology with a minor in molecular and cellular biology from the University of Arizona. He arrived at IU School of Medicine as a Howard Hughes Postdoctoral Fellow in 1994 and joined the Wells Center Faculty in 1999.

In addition to his role as interim director of the Wells Center, Kapur is the co-leader of the Hematopoiesis and Hematologic Malignancies research program at the IU Simon Cancer Center. He holds appointments in the departments of Biochemistry and Molecular Biology, Medical and Molecular Genetics, and Microbiology and Immunology at IU School of Medicine. He is actively involved with a number of professional organizations, including the American Society for Hematology, the International Society for Experimental Hematology and the American Society for the Advancement of Science.

“Over the years, I’ve watched the Wells Center expand from a small team of scientists to the thriving epicenter of research and learning that we have today,” said Kapur. “I look forward to supporting our talented and passionate teams as they continue to lead groundbreaking discoveries that bring hope to the children and families who face pediatric disease.”

The Wells Center was established in 1991. Today, it houses nearly 200 faculty, staff and trainees in eight thematic research groups that investigate the mechanisms of common and pervasive childhood illnesses such as asthma, diabetes and congenital heart defects and the rarest and most difficult-to-treat cancers and genetic syndromes.