Researchers at Indiana University School of Medicine have discovered how a dangerous parasite maintains a steady supply of nutrients while replicating inside of its host cell: it calls for delivery.

Toxoplasma gondii is a single-celled parasite capable of infecting any animal, including humans. Up to one-third of infections in people happen through contact with cat waste or contaminated food or water. Although the parasite only causes acute disease in immune compromised persons, the infection is permanent and has been associated with neurological diseases such as schizophrenia and rage disorder.

The parasite can invade virtually all types of cells in the body. Once inside, it begins to divide exponentially, a process that requires a great deal of resources. The parasite extracts most of the nutrients it needs for replication from its host cell, including essential amino acids like arginine. Because arginine is quickly depleted from the host cell, researchers wanted to learn where the parasite gets more of the amino acid to fuel its expansion into the hundreds.

In a collaborative study funded by the National Institutes of Health, microbiology and immunology professor Bill Sullivan, PhD and biochemistry and molecular biology professor Ronald Wek, PhD identified a cellular starvation stress response that occurs within two hours after Toxoplasma infection. The study was led by Leo Augusto, a postdoctoral fellow in the Sullivan and Wek laboratories, who used a variety of mutant host cells to discern that a protein called GCN2 becomes activated as parasites consume the host cell’s arginine supply. Augusto mapped out the cascade of events following GCN2 activation, leading him to discover that host cells infected with Toxoplasma express more of an arginine transporter called CAT1 at their cell surface. CAT1 brings more arginine into the infected cell so Toxoplasma can continue to binge. 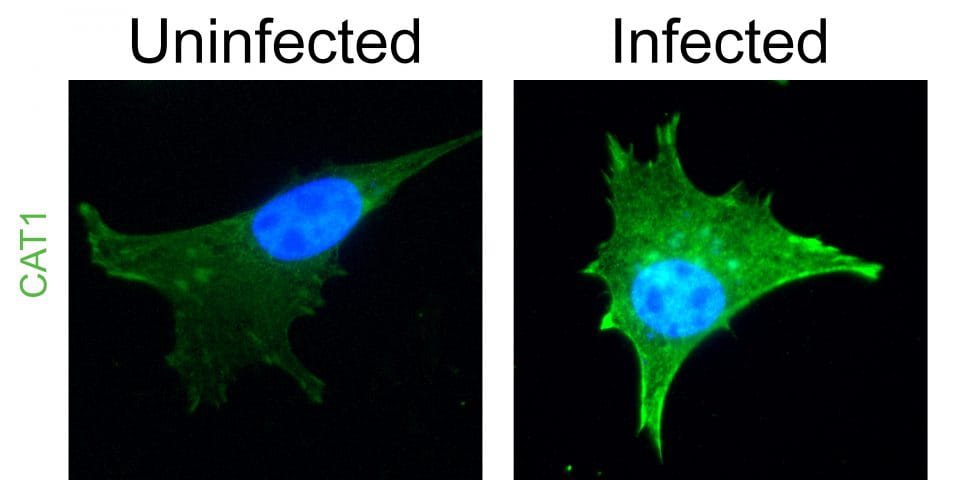 These findings suggest infected host cells can sense their nutrients being depleted. Oblivious to the parasites growing inside them, the host cells unwittingly gear up to bring in more arginine to compensate for the loss. The identification of proteins like GCN2 that are important for parasite growth and replication may serve as promising new drug targets to treat intracellular pathogens.

“Pathogens that live and grow inside of cells face special challenges,” Sullivan said. “Intracellular pathogens have to replicate without raising alarms, but in order to grow they need to pilfer nutrients from the host. Our study shows that Toxoplasma gets additional nutrients simply by hijacking a starvation response already built into the host cell.”

Whether the parasite does this on purpose or if it is a happy accident is still a lingering question. Augusto’s work appears to suggest the latter, as parasites deficient in arginine uptake did not elicit a strong starvation response in host cells.

The study was recently published in the journal PLOS Pathogens.