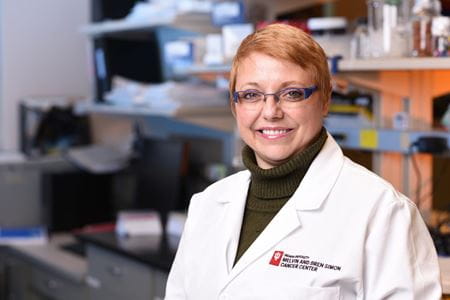 INDIANAPOLIS — A team of researchers from Indiana University and Memorial Sloan Kettering Cancer Center have been awarded a $4.1 million National Cancer Institute “Cancer Moonshot” grant to develop immunotherapy treatments for cancer in children and adolescents, especially those with leukemia.

Sophie Paczesny, MD, PhD, professor of pediatrics and of microbiology and immunology at IU School of Medicine and a researcher at the Indiana University Melvin and Bren Simon Cancer Center, will collaborate with Nai-Kong Cheung, MD, PhD, of Memorial Sloan Kettering.

Paczesny and her colleagues want to better understand how tumors and the tissues that surround them – called the tumor microenvironment – put up defenses to protect the tumor cells. The body routinely creates immune system cells called T cells that attack foreign invaders such as bacterial infections, but the tumor microenvironment creates barriers to thwart those “killer” T cells from attacking cancer cells. 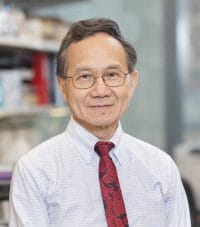 Paczesny and her team have identified a new checkpoint molecule, a protein called ST2. They have been working on ST2 for several years because it plays an important role in how the immune system reacts to bone marrow transplants used in cancer therapy. Now they plan to study how ST2 functions in the complicated sequence of chemical signals that creates tumor defense systems.

“If we can block the pathways used by these checkpoint molecules, such as ST2, we can enable the body to more effectively use its ‘killer’ T cells to attack the tumor cells,” said Paczesny, who is also a scientist at the Herman B Wells Center for Pediatric Research.

Cheung and his team at Memorial Sloan Kettering in New York will work to develop promising antibodies to target and block these pathways, initially for testing in mice and then for human clinical trials. Cheung is a pediatric oncologist who has developed antibodies to treat neuroblastoma, a rare nerve-tissue cancer that often spreads to the brain and is most common in young children. The neuroblastoma antibody currently is used to treat pediatric patients at Riley Hospital for Children at IU Health.

The Cancer Moonshot grant application process encourages researchers from different cancer centers to collaborate to achieve various goals, including the creation of a network of pediatric immunotherapy experts.

The Cancer Moonshot’s goal to accelerate cancer research aims to make more therapies available to more patients, while also improving the ability to prevent cancer and detect it at an early stage. Congress passed the 21st Century Cures Act in December 2016, authorizing $1.8 billion in funding for the Cancer Moonshot over seven years.