IU announces progress toward its Precision Health Grand Challenge: cancers it aims to cure, diseases it is working to prevent 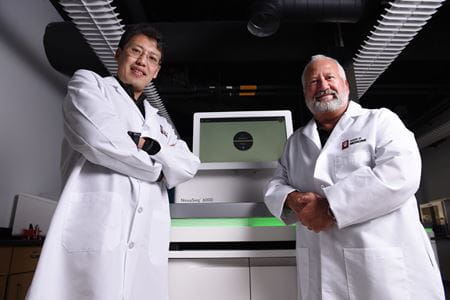 IU Precision Health leaders announced they have recruited 33 new research faculty from throughout the country and built some of the most advanced research and clinical capabilities in the Midwest with the goals of:

In addition, the university unveiled that a team led by IU Bloomington social scientists will soon begin canvassing rural Indiana to collect information and DNA samples from residents of all backgrounds. The data collected will help researchers understand how genetic, behavioral and environmental factors influence a person’s health.

Led by IU School of Medicine, the Grand Challenge Precision Health Initiative is IU’s big health care solution. It was established in 2016 with a $120 million investment––$80 million of which has already been committed.

“The progress made over the last two years is already impacting the care we provide patients,” said IU School of Medicine Dean Jay L. Hess, MD, PhD, MHSA. “The Precision Health Initiative ensures Hoosiers do not have to travel to receive leading-edge care and participate in clinical trials. In partnership with IU Health, we are now using genomics to personalize care for thousands of patients, and we are the only place in Indiana to offer cellular immunotherapy – the ability to reprogram a patient’s immune system to fight disease.”

Beginning in August, Precision Health Initiative social scientists led by Bernice Pescosolido, PhD, Distinguished Professor of Sociology at IU Bloomington, will begin an effort to reach a statistically representative sample of 2,000 Indiana residents that reflects the demographic characteristics of Hoosiers. Based on recent U.S. Census data, residents will be selected to participate in the initiative’s “Person to Person Health Interview Study.”

Households that are selected will be sent letters of invitation in the mail, letting them know that credentialed interviewers will soon be arriving at their door. Residents will then be asked to complete a questionnaire covering a variety of health topics such as their exposure to environmental contaminants and their attitudes toward mental health treatment. Participants will also be asked to discuss their social networks and provide a saliva sample for DNA collection.

“People turn to their social networks to support their well-being, health and pathways to care, so it matters who is in your network,” Robel said. “This unique approach will allow IU researchers to bring the voices and experiences of Indiana’s people into the Precision Health Initiative’s efforts to improve health.”

“Identified diseases are taken through each pillar using a team science approach as we work to treat, cure and prevent diseases,” Dr. Shekhar said.

He cited the university’s approach to Alzheimer’s disease as an example of how different pillars––or scientific areas of focus––of the IU Precision Health Initiative will work together.

Once those biomarkers are determined, researchers will investigate and develop immune-based therapies that not only target biomarkers of the disease, but are also tailored precisely to an individual’s own biology.

Bruce Lamb, PhD, co-leader of the Precision Health Alzheimer’s disease research team and executive director of IU School of Medicine’s Stark Neurosciences Research Institute, said, “Previous approaches to treatment or prevention of Alzheimer’s disease may have failed because they only focused on one indicator of disease, such as amyloid or tau.”

“Our approach focuses on altering the body’s own immune system to positively impact all three biomarkers of amyloid, tau and inflammation,” Lamb said. “If we can identify new methods to slow Alzheimer’s disease from progressing to a fully debilitating disease of the mind and body, we’ll have made a great step forward.”

“I’m concerned (about my diagnosis), but I also feel good that there is so much being done these days and so many people are working on it; that gives me reason for hope and reason to be proud that I get to be a part of it,” Estrada said.

Because the IU Precision Health Initiative is a long-term effort, IU School of Medicine is sponsoring monthly podcasts on the topics of diseases that IU researchers aim to cure, treat or prevent. The podcasts, produced by the award-winning show “Healthcare Triage,” are anchored by IU School of Medicine faculty and social media star Aaron E. Carroll, MD.

You can download the first podcast, focused on Alzheimer’s disease, on the IU School of Medicine website: medicine.iu.edu/expertise/precision-health-initiative.

Additionally, anyone interested in getting involved in improving health in Indiana is encouraged to visit www.allin4health.info and sign up to receive information about health resources and to participate in research happening across the state.

What leaders are saying…