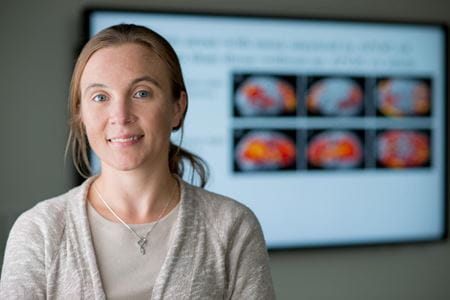 Problems identifying odors could be an early warning sign that the protein tau is building up in the brain, researchers have found. Tau is one of two proteins that are primary suspects in the development of Alzheimer’s disease.

In a study of 34 older patients, researchers at Indiana University School of Medicine found that those who scored less well on a standard test of smell were more likely to have more tau protein concentrations in their brains, particularly in regions associated with the sense of smell. The study also indicated that such olfactory issues may also be associated with atrophy in certain portions of the brain.

At the same time, the researchers found no association between olfactory issues and the presence of amyloid proteins, the other primary protein suspected of playing a significant role in Alzheimer’s disease development.

The study was published in the journal Alzheimer’s & Dementia: Diagnosis, Assessment & Disease Monitoring.

The results suggest that problems with odor identification could become an early warning biomarker for physicians working with older patients, said Shannon L. Risacher, PhD, assistant professor of radiology and imaging sciences at IU School of Medicine and lead author of the research article.

According to the Alzheimer’s Association, five million Americans now are living with Alzheimer’s disease. Current treatments can slow the progression of symptoms of the disease, but there is currently no cure. The association estimates that the number of affected people could rise to as many as 16 million by 2050.

To help identify people at risk for Alzheimer’s disease “We’re going to need a way to screen people over the age of 55 or 60 in a way that isn’t invasive or doesn’t require more advanced machinery,” Dr. Risacher said.

“These results suggest that a smell test is a viable possibility as a first line screening tool. Potentially it could be done in doctor’s office in 10 minutes. Depending on the results, a first-line test could enable a physician to refer a patient for more extensive testing.”

Scientists and physicians have known for some time that people with Alzheimer’s disease and other neurodegenerative disorders, such as Parkinson’s disease, often have impaired abilities to differentiate odors.

Earlier studies found associations between olfactory issues and neurodegeneration – the loss of brain matter — but less so with the buildup of amyloid proteins that is associated with Alzheimer’s disease.

IU researchers were able to study the impact of tau separately from amyloid with the relatively recent advent of neuroimaging tools that can identify the tau protein in the brain.

In the group studied, five individuals had been diagnosed with mild cognitive impairment, a condition that places a person at increased risk of developing Alzheimer’s disease. Ten people were characterized as having subjective cognitive decline, meaning they complained of memory issues but did not demonstrate measurable problems in standard tests. Nineteen participants had no subjective or tested cognitive deficits and were characterized as cognitively normal. Their ability to differentiate odors was tested with the University of Pennsylvania Smell Identification Test, which Dr. Risacher explained in a Q&A blog post.

Analyzing the results of positron emission test (PET) and structural magnetic resonance imaging (MRI) scans for all the tested individuals, the researchers found that lower scores on the smell test were associated with both tau deposits and brain atrophy. When looking at only the cognitively normal and subjective cognitive complaint groups, only tau was associated with odor identification problems.

Risacher noted that because the study group was small, further work with a larger group of participants is necessary, particularly to better understand the potential role of amyloid proteins in the process. Researchers are working to better understand the relationships between amyloid and tau in Alzheimer’s disease, but there weren’t enough participants to tease out the possible interactions between the two in this study of smell, she said.

The research was supported by the National Institute on Aging, the Alzheimer’s Association, the IU Health-IU School of Medicine Strategic Research Initiative, and the Indiana Clinical and Translational Sciences Institute (CTSI).