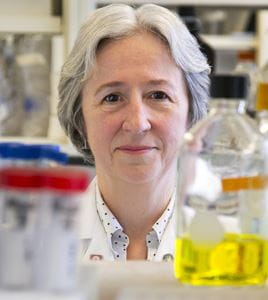 INDIANAPOLIS — Lynda F. Bonewald, Ph.D., an internationally recognized scientific and academic leader in bone research, has been named the first director of the Indiana Center for Musculoskeletal Health at the Indiana University School of Medicine.

Dr. Bonewald, whose research focuses on aspects of bone biology, is currently director of the Kansas City Consortium for Musculoskeletal Diseases and Disorders, the UMKC Center of Excellence in Dental and Mineralized Tissue and the School of Dentistry Bone Biology Research Program.

“The new musculoskeletal center was designed to foster collaborative research and accelerate discovery in Indianapolis. Lynda Bonewald’s experience as a researcher and administrative leader make her the perfect choice to be the founding director of this center,” said Jay L. Hess, M.D., Ph.D., M.H.S.A, dean of the IU School of Medicine and IU Vice President for University Clinical Affairs.

“Indiana University School of medicine has prioritized four major disease areas of cancer, neuroscience, cardiometabolic, and musculoskeletal disorders for its growth in research. Establishing the new Musculoskeletal Center along with the already thriving three centers for cancer, neuroscience, diabetes was part of that strategic vision. I am delighted with being able to recruit a scientist like Lynda Bonewald to lead this new Center,” said Anantha Shekhar, M.D., Ph.D., executive associate of research affairs at the IU School of Medicine and director of the Indiana Clinical and Translational Sciences Institute.

“Over the years I have watched Indiana recruit some of the brightest, creative, and most productive investigators in the area of bone research. I’m thrilled to lead this new initiative that will integrate these investigators into a center that will support collaborative interactions and team building,” Dr. Bonewald said.

“Together we can fulfill the vision to foster synergism not only in discovery and research but also in musculoskeletal education and the generation of innovative clinical applications,” she said.

After receiving her doctorate in immunology/microbiology from the Medical University of South Carolina in 1984, Dr. Bonewald worked as a post-doctoral fellow at the Veterans Affairs Medical Center in Charleston.

She subsequently progressed from assistant to full professor at the University of Texas Health Science Center in San Antonio before being named the Lefkowitz Professor of Oral Biology and director of the Bone Biology Research Program, School of Dentistry, at the University of Missouri at Kansas City in 2001.