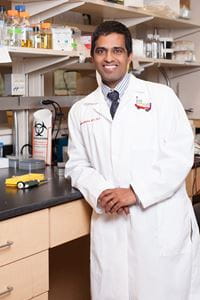 INDIANAPOLIS — An international team of diabetes researchers led by Indiana University scientists has been awarded a $2.4 million research grant to discover and develop biomarkers meant to provide early prediction and diagnosis of type 1 diabetes.

Nearly 2 million people in the U.S., most of them children, are diagnosed with type 1 diabetes each year, and nearly 30 million American are living with the disease. Type 1 diabetes occurs when the insulin-producing cells of the pancreas — beta cells — die off to the extent the body is unable to produce enough insulin, which is needed to convert sugar and other foods into energy.

Biomarkers are proteins, bits of genetic material or other molecules found in blood or other tissues that can be used as indicators of disease, response to drugs or other bodily activities.

Early detection is needed, the researchers said, because by the time patients are diagnosed with diabetes, most of their beta cells have been destroyed by the body’s own immune system. Research trials attempting to slow or reverse the disease by suppressing the immune system have not been successful, said Dr. Evans-Molina, assistant professor of medicine.

“A big reason these drugs fail is that by the time a person presents to clinic with high blood glucose, the underlying process has already led to the death of 80 to 90 percent of beta cells,” she said.

Although type 1 diabetes is widely viewed as an autoimmune disorder — one in which the body’s immune system attacks the body’s own tissues as if they were foreign tissues — how and why that occurs in diabetes is not well understood.

However, research by Dr. Mirmira and others suggests that problems arise in the beta cells themselves early in the evolution of the disease, triggering biochemical stress pathways inside the cells that either initiate or accelerate the immune system attacks on the beta cells.

“The majority of people in the field believe type 1 diabetes really is an autoimmune disease, but I think people are beginning to appreciate that it’s not as simple as that,” said Dr. Mirmira, Eli Lilly and Co. Professor of Pediatric Diabetes.

To conduct the research, Mirmira and Evans-Molina, who are investigators at the Herman B Wells Center for Pediatric Research, organized a team with complementary expertise in the analysis of proteins and gene expression:

The IU researchers, meanwhile, can identify as little as a single molecule of DNA in a tissue sample using a technology known as droplet digital PCR — the only such system in the state.

“With the technologies we’ve amassed, and with the tissue banks available to us, we want to develop a picture of how the disease progresses over time, based on what’s different about the beta cells at different stages,” Dr. Mirmira said.

The goal is to find a protein or other molecule that is uniquely produced by the stressed beta cells and that could be detected in the blood long before a patient appears at a hospital with symptoms.

With early detection, some of the immune system treatments that so far have proven ineffective might work better when used earlier, Dr. Evans-Molina said. Moreover, she added, the research to find the biomarkers could itself lead to more effective treatments.