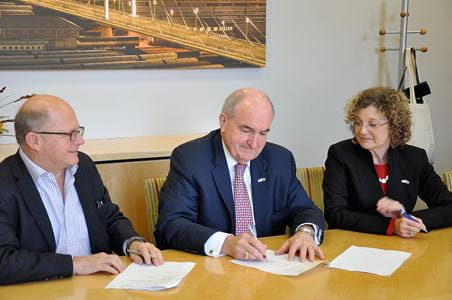 EDITORS: News media can follow accounts of the Indiana University presidential trip to Ghana, Kenya and South Africa at global.iu.edu/blog/africa.

JOHANNESBURG and CAPE TOWN, South Africa — During a week in two of South Africa’s largest and most dynamic cities, an Indiana University delegation led by President Michael A. McRobbie signed a new partnership agreement with the country’s top-ranked business school and agreed to further explore a number of other areas for collaboration and cooperation that could form the basis of partnerships with some of South Africa’s premier teaching and research institutions.

“I could not be more pleased with the results achieved during our first full week in Africa,” McRobbie said. “South Africa is easily one of Africa’s most diverse and dynamic countries, one that is actively confronting the tension between its difficult political past and a future filled with great opportunity for growth and development, especially in the area of higher education, and where IU’s academic strengths are particularly well aligned with the country’s most pressing needs.McRobbie also presided over the formal launch of IU’s first alumni chapter in South Africa, where IU has had a long and illustrious history of engagement toward helping the country become an emerging economic power in the face of major historical, political and socio-economic challenges.

“The relationships we have formed this past week will ensure that Indiana University continues its longstanding tradition of institution-building and educational development in this important economic region of the world,” McRobbie added. “In turn, there clearly is much that our students and faculty can learn from this nation’s rich history of rising above oppression and believing in the power of education to create opportunity and positive change.”

McRobbie is leading the IU delegation on a two-week trip to sub-Saharan Africa, the first by an IU president in over two decades. The trip’s itinerary includes South Africa, Kenya and Ghana, where the university is seeking to foster new partnerships that will serve to increase the number of IU students studying abroad in Africa, attract more of Africa’s top students to IU and foster more research collaborations among IU faculty and colleagues at South Africa’s top research institutions.

To this end, McRobbie and Kelley School of Business Dean Idalene Kesner signed a formal partnership agreement between the Kelley School and the Gordon Institute of Business Science, or GIBS, which is considered the top business school for executive education in Africa. The agreement calls for, among other activities, the sharing of faculty expertise, collaborative research projects and future study abroad opportunities for students from both institutions.

This past week, McRobbie also met with administrators and faculty at GIBS’ parent institution, the University of Pretoria, as well as with leaders at the University of the Western Cape and the University of Cape Town. He also met with South African Minister of Higher Education and Training Blade Nzimande to discuss future collaborative activities centered on IU’s many academic strengths, including those housed in the university’s internationally acclaimed African Studies Program.

The program, which celebrated its 50th anniversary in 2011, is one of 11 federally funded Title VI area studies centers — the largest number of such centers anywhere in the United States — in IU’s new School of Global and International Studies. The program offers more African languages than any other U.S. college or university, as well as a wide spectrum of academic offerings that includes, among other disciplines, African art, film, folklore, history, literature, music and public health.

Since the inception of the African Studies Program, IU has provided instruction in 52 separate African languages. It currently teaches seven of South Africa’s 10 national languages. IU faculty have also published more books on African languages and linguistics that any other U.S. institution. In addition, the relocation of the National African Language Resource Center to IU Bloomington — IU is the only university with such a center — has served to further strengthen its position as a premier institution for the teaching of African languages.

Beyond language instruction, IU has made extensive connections with South Africa through a range of academic, cultural and legal activities, some dating back to the days of apartheid, when it was difficult for universities to engage in the country. Those activities include helping to establish Khanya College, which helped talented but disadvantaged black students pursue an education at South Africa’s best universities, in 1986. That same year, IU also began offering preparatory first-year university courses for black South Africans who demonstrated potential for pursuing an undergraduate degree. In the 1990s, IU started a legislative drafting program with the University of Pretoria to address a need in South Africa for skilled professionals with experience in writing law.

McRobbie hailed the establishment of IU’s first-ever South African alumni chapter as another pivotal moment in IU’s history of engagement with the country.

“Indiana University alumni are an enormous source of pride around the world, and our alumni here in South Africa, who speak so fondly and memorably of their time at IU, are no different,” McRobbie said. “We are extremely excited to be launching this new chapter, which we hope will continue to grow as a result of our efforts to foster partnerships that provide opportunities for more South African students to come to IU.”

After South Africa, members of the IU delegation will travel to Eldoret, Kenya, where they will be given a first-hand look at the impact made by the groundbreaking IU-Moi University AMPATH program in Kenya. Since its inception in 1989, AMPATH, which stands for the Academic Model Providing Access to Healthcare, has grown into one of the largest, most comprehensive public health efforts in sub-Saharan Africa. Nominated multiple times for the Nobel Peace Prize, the program serves a population of 3.5 million people in over 500 urban and rural clinical sites throughout western Kenya, and it has enrolled more than 160,000 HIV-positive people.

The presidential trip will conclude later this week with a trip to Ghana, site of IU’s first-ever study abroad program, where members of the delegation will meet with leaders at IU’s longstanding partner, the University of Ghana.