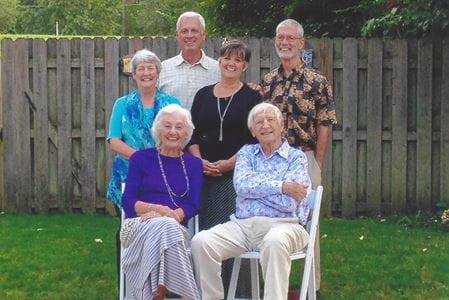 INDIANAPOLIS—In a gesture that defines gratitude and respect spanning more than 23 years, Carmel resident Ruth “Rikki” Kutcher Goldstein has made a $2 million gift to support cancer research at Indiana University School of Medicine.

The Rikki and Leonard Goldstein Chair in Cancer Research will be held by a lung or pancreatic cancer researcher at the Indiana University Melvin and Bren Simon Comprehensive Cancer Center. The gift honors Lawrence H. Einhorn, MD, for his care of her son-in-law, S. Wyle Weiman, more than 20 years ago. Though Wyle unfortunately died of lung cancer, the family remains grateful for the expertise and compassion that Einhorn provided. Since 1998, the Goldsteins have provided annual support to Einhorn’s research.

“All Hoosiers should be grateful for the impact Larry has had on cancer research during his career at IU,” Rikki Goldstein said. “Our family is thrilled to honor him by ensuring that IU can continue to recruit and retain top-notch researchers like him.”

Einhorn, who is internationally known for his role in developing the chemotherapeutic cure for testis cancer in the 1970s, has been a faculty member at IU School of Medicine since 1973. Over his career, he has mentored and trained more than 100 oncologists and provided care to countless patients. His work continues to focus on testis and lung cancers.

“In our family, we believe that giving and volunteering are important traditions," she said. “My parents taught me to support those in need. As a matter of fact, it's almost a requirement in Judaism. The word is ‘tzedakah,’ and it means responsibility. Being able to do this is really exciting for me and for all our kids, too.”

The Goldsteins, who were married for 71 years before Len’s death at the age of 97 in 2018, are the parents of four adult children: Michael, Steven and Jan Goldstein and Lisa Post. They also have eight grandchildren and four great-grandchildren.

After being an active volunteer at her children’s schools, Rikki Goldstein re-entered the workforce and, while working, earned her bachelor’s degree at age 50 from Indiana University Purdue University Fort Wayne (now Purdue University Fort Wayne). In 1976, she was a founding mother of the Fort Wayne Women’s Bureau, where she worked as director of peer counseling supervising programs that helped women re-enter the workforce after a divorce or death of a spouse.

In 1996, at age 70, Rikki Goldstein began working for the Neighborhood Health Clinics in Fort Wayne. For 20 years, she served as a medical social worker and directed outreach programs before retiring in August 2016.

“Medical research is very meaningful to me professionally as well as personally,” she explained. “That’s one of the reasons I am particularly delighted to make this gift.”

In 1994, Rikki and Len Goldstein were each appointed Sagamores of the Wabash by then-Governor Evan Bayh. One of the highest honors an Indiana governor can give, the award is presented for distinguished service to the state or governor.