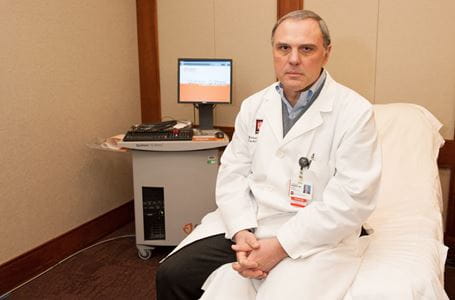 But first the players must make a stop at IU Health Methodist Hospital, where they undergo cardiac testing to ensure that their hearts have what it takes to play in the NFL. The players receive electrocardiograms and echocardiograms to determine whether any of them have anomalies that have gone undetected throughout their athletic careers.

It’s not out of the question. Each year tests reveal problems serious enough for two or three players to be “red-flagged” as possibly needing additional evaluation before they can participate in the scouting combine workouts, said Richard Kovacs, M.D., professor of clinical medicine at the Indiana University School of Medicine and clinical director of the Krannert Institute of Cardiology.

The testing results for all the combine athletes are delivered back to NFL medical staff at Lucas Oil Stadium. Dr. Kovacs and his colleagues don’t make recommendations, leaving decisions about further testing and participation to the NFL medical staff.

The testing at Methodist is conducted with loaned equipment and volunteer staff, so it doesn’t interfere with hospital operations.

With potential contracts in the millions of dollars, the stakes are high for the players. But the impact of the screenings will go beyond these players because the data collected also are part of a research project that could help determine future guidelines for screenings of all athletes, not just those at elite levels, Dr. Kovacs said.

It will also shed light on what’s “normal” for athletes who combine intense training and enormous size in hopes of playing football on Sundays.

“We don’t have a lot of cardiac data on people who weigh 300 pounds and can run a 40-yard dash in five seconds,” Dr. Kovacs said.

This is the third year for the current testing program, which added echocardiograms to the electrocardiograms performed previously. The “echo” tests give a visual image that can detect problems such as hypertrophic obstructive cardiomyopathy, an abnormal thickening of the heart muscle that can be fatal. The EKGs, meanwhile, show heart rhythms and electrical activity.

Dr. Kovacs and his colleagues will meet with NFL officials later this year to evaluate the screening program, assessing whether it has been providing useful information in a cost-effective manner. The data will also be studied to prepare a research article for a scholarly journal.

The impact of cardiac anomalies is anything but academic, however.

About 400 athletes at all levels of sport die on the field or court each year in the United States, with an undetected cardiac anomaly being the most common cause, Dr. Kovacs said.

While physical exams are routine for athletes, cardiac testing is not. The tests are expensive and, in the end, the benefits are not certain and problems can be missed.

“We don’t know whether screening everyone is the right thing to do,” he said.

Along with other experts, including former Krannert Institute director Douglas Zipes, M.D., Dr. Kovacs co-chairs a group that will be reassessing existing recommendations, known as the Bethesda Conference, that set guidelines for eligibility for athletes with cardiovascular abnormalities.

In the meantime Dr. Kovacs is emphatic that whatever screening tools are used should be applied equally, whether in public, private, suburban, central city or rural schools.