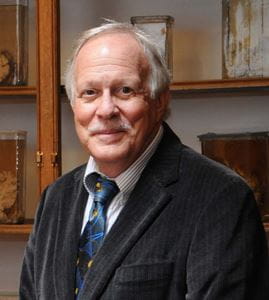 The findings were published in the Oct. 4 issue of Nature magazine. IU School of Medicine pathologist George E. Sandusky, DVM, Ph.D., principal investigator for the study at IU, said the university is one of 35 tissue source sites in the U.S., Canada, the United Kingdom and Europe. Dr. Sandusky is a senior research professor of pathology and laboratory medicine at IU School of Medicine.

As anyone who has been touched by breast cancer knows, it is not a singular disease but a vastly complex one with various cell types and subtypes, gene mutations and chemical aberrations, which control the effectiveness of various treatments. The purpose of The Cancer Genome Atlas is to identify the changes in cellular DNA that cause cells to grow uncontrolled.

According to the National Cancer Institute, there are at least 200 different forms of cancer and many more subtypes. The Cancer Genome Atlas began as a three-year pilot project in 2006, which confirmed that an atlas of changes could be created for specific cancer types. Since then, a genetic atlas has been published for brain, ovarian and, now, breast cancers.

“The ultimate goal of the Cancer Genome Atlas is to identify the gene mutations and pathways so targeted therapies can be developed to more efficiently and effectively treat various cancers,” Dr. Sandusky said. “All of the (Cancer Genome Atlas) studies have found new novel information and reaffirmed that some genetic pathways were valid findings from earlier studies.”

Researchers found four primary breast cancer subtypes, each with its own biology and survival outlooks.

The four novel genetic subtypes confirmed by the research are HER2-enriched (HER2E), Luminal A, Luminal B and Basal-like.

HER2 is a protein that has been targeted for treatment in recent years and is known to have an important role in the progression of certain aggressive types of breast cancer. Breast cancer cells with the HER2 receptor on the surface are called HER2-positive; those without the receptor are referred to as HER2-negative. This research showed the HER2E protein may, in fact, be represented in two additional subtypes of tumors. When analyzed with standard cellular tests, only half of the samples were found to be characterized as belonging to the HER2E subtype. The other half was characterized as Luminal subtypes.

The Basal-like subgroup has genetic similarities to a form of ovarian cancer. Both may be responsive to treatments that stop the growth of blood vessels that feed the tumor, a process called anti-angiogenesis. This subgroup also may be receptive to treatments with drugs that target DNA repair, which include chemotherapy agents such as cisplatin, perhaps best known as a treatment for testicular cancer.

Dr. Sandusky said the IU School of Medicine has been recognized for the consistency and quality of the tissue samples provided for analysis.

“In the past two years, we’ve had some major breakthroughs with genomics,” he said. “The entire Genome Atlas is going to pay off; already it has identified a lot more genetic markers for all types of cancer, which will enhance the field of personalized medicine and the success of treatments.

“They have found valuable clinical information, more than anything we’ve found in the past 10 to 15 years, but I think we are only at the tip of the iceberg,” he said. “And that’s a good thing.”