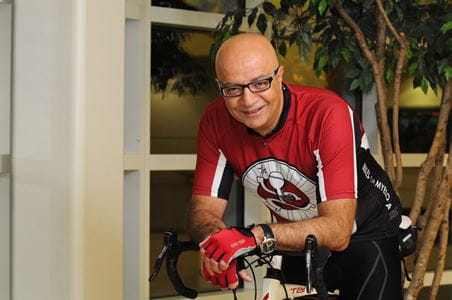 At first, doctors couldn’t figure out what was causing the extreme pain. Other than the back pain, Gill had no other symptoms.  Eventually, he was diagnosed with multiple myeloma (pronounced mahy-uh–loh-muh), an incurable blood cancer.

That was 13 years ago. Today, Gill plays an important part in the annual cycling event Miles for Myeloma in which Rafat Abonour, M.D., a physician researcher at the Indiana University Melvin and Bren Simon Cancer Center, has undertaken for the past eight years.

Gill and others are part of the road crew, a group of volunteers who scout out the planned route and look for alternatives that might provide safer conditions for Dr. Abonour and the other riders who join him. Gill himself has ridden in Miles for Myeloma five times.

Dr. Abonour takes off on this year’s ambitious ride on Friday, Sept. 28, near Cincinnati and finishes the day in Columbus, Ind. The next day, Dr. Abonour and his fellow riders will cover the hilly distance between Columbus and Indianapolis. Before crossing the finish-line in Indianapolis, Dr. Abonour and those riders who started with him will have ridden more than 200 miles.

Why does Dr. Abonour do this? He’s taken on a grueling ride year after year for his patients and others with the multiple myeloma because he knows they endure so much every day with their disease.

To date, the cycling event has raised nearly $2 million for multiple myeloma research at the IU Simon Cancer Center. Dr. Abonour said those research dollars have helped to attract other leading multiple myeloma investigators to the cancer center.

“Myeloma cells don’t grow in a vacuum,” Dr. Abonour said  “They really need a bone marrow environment to grow.  Dr. Roodman is a leader in understanding that. Because of his expertise, we are developing drugs that may make it inhospitable for myeloma cells to grow.

Dr. Roodman recruited Rebecca Silbermann, M.D., to IU after the two had previously worked together at the University of Pittsburgh. Dr. Silbermann’s research is centered on myeloma bone disease.

Their expertise is needed. According to the American Cancer Society, about 21,700 new cases will be diagnosed in 2012, and about 10,710 deaths are expected this year.

A person with myeloma, according to Dr. Abonour, is typically around 60 years old. The cancer accumulates in bone marrow, weakening the bones and causing osteoporosis, anemia and kidney failure. Myeloma also leaves people susceptible to infections because their immune system is weakened.

Myron Gill, now 72, underwent radiation, chemotherapy, and a stem cell transplant as part of his journey to remission. He returns to the cancer center every two months for follow-up visits. He’ll also be at the Miles for Myeloma finish-line celebration.

Miles for Myeloma ends with a finish-line celebration at 4:15 p.m. Saturday, Sept. 29 in front of University Place Hotel on the Indiana University-Purdue University Indianapolis campus. More than 350 myeloma patients and family members are expected to gather to watch the trek end.  All are welcome to attend.

Note to editors:  This year’s Miles for Myeloma route takes the riders to: