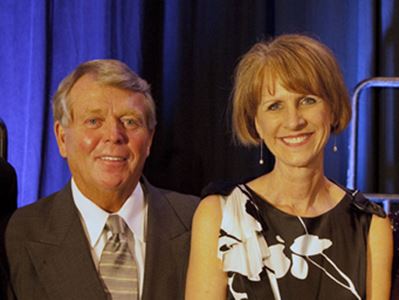 In front of more than 700 of her professional peers, Dropcho was selected from three finalists for the national award, sponsored by Cure Media Group and Oncology at Amgen. Dropcho was nominated by one of her patients, Greg Schilling of Greenwood, Ind., whose essay highlighted Dropcho’s exceptional compassion, expertise and commitment to her patients.

Schilling described the days after his diagnosis as “filled with dread” and wrote that he “had no reason to hope at first.” That was until he met his nurse, Dropcho, also a cancer survivor. According to Schilling, Dropcho “is the epitome of what a nurse should be. She has empathy, compassion and caring that is so genuine and real, I feel it when I see her. She has given me hope on many of the dark days I’ve had.” In addition to bringing Schilling hope, Dropcho has successfully navigated her grateful patient into two clinical trials — the most recent of which has not only stopped his tumors from growing, it has shrunk them by 16 percent.

The winning essay will be featured in the summer 2012 issue of CURE, a free, quarterly magazine for cancer patients, survivors and caregivers. All three of the finalist essays, photos and videos from the event, and a Q-and-A with winner Dropcho will be featured on www.curetoday.com beginning June 13. Additionally, the essays, photos and more will be available on CURE’s Facebook page.